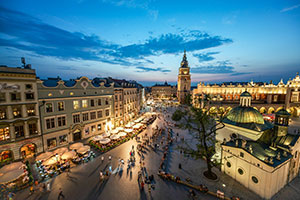 The historic city of Kraków in Poland has topped a Which? Travel magazine survey to find the best cities in Europe outside the UK.

All 47 destinations achieved scores of more than 60%, and two thirds of the cities scored more than 80%. Kraków fared best in our survey of 4,585 holiday experiences, achieving an impressive city score of 94%.

By contrast, the Italian cities of Milan and Naples sit at the bottom of the table with a city score of 62% and 64% respectively.

Popular destinations such as Amsterdam, Berlin, Bruges, Paris, Rome and Venice were also included in the survey. The results include star ratings for accommodation, cultural attractions, the ease of getting around, food and drink,  shopping, value for money and the welcome.

Find out how the cities performed – full table of results

Topping our table of European city destinations, Kraków has an old town that brims with elegant, well-preserved, time-warp buildings and cobbled streets, all on Unesco’s World Heritage list. It is compact enough to easily explore on foot and public transport is also cheap.

The city scored a maximum five stars for its friendly welcome and for the food and drink, which includes the traditional ‘bigos’ stew and hazelnut vodka. Members also gave the city five stars for value for money – a hotel room typically costs £55 and a bus from the airport to the city centre is less than £1.

EasyJet , Ryanair and Jet2.com fly non-stop to Kraków from UK airports – the average flight time from London is 2 hours, 25 minutes.

Find out more: Short haul airlines – which are the best and worst airlines for a European trip

Other places that received high city scores in the survey include Munich and Prague – each with 93%. It takes around 1 hour, 50 minutes to fly from London to either city.

There’s more to the Bavarian capital than sausages and beer halls, though members’ experiences of both may have helped Munich get five stars for food and drink.

Prague also achieved a maximum five stars for value for money – the public transport network is cheap, and free for foreigners aged over 70.

We asked Which? members to rate their experiences in the European cities they have stayed in outside of the UK. Only cities and star rating categories with at least 30 responses were reported on.

To produce city scores for each destination, we asked Which? members how satisfied they were overall with their experience and how likely they would be to recommend the city to a friend.