We reveal the best TVs for 2016, including models from Samsung, Sony, Panasonic and LG, fresh from the CES tech show in Las Vegas.

A new generation of televisions has arrived at CES 2016 and it’s not just 4K causing a buzz – HDR (high dynamic range) is the talk of the show, promising pictures with brighter whites and darker shadows.

We’ll keep updating this page as more models are announced, but here’s our roundup so far of the best TVs of 2016 from top brands, including Sony, Samsung, LG and Panasonic.

Best Buy TVs – the TVs that aced our tests in the Which? lab

One of LG’s new premium ‘Signature’ products, the G6 is an OLED 4K TV with a staggering design. Available in 65-inch and 77-inch versions, it’s super-slim screen is just 2.57mm thick – the depth of four credit cards. LG has mounted it on a pane of glass, bumping up the actual depth to around 5mm, but it’s still thinner than an Apple iPhone 6 and, in our humble opinion, is rather a looker.

The ribbed base houses speakers and woofers to produce a great sound experience too, with the sound thrown forward for clarity. Want to wall mount the telly? No problem. The base swings back and the speakers inside tilt so you can still enjoy the same sound quality from the wall. The TV supports HDR content, so you should be able to pick out the details in dark, moody movies. And because it’s OLED, it can produce super-dense blacks to give the picture a greater sense of contrast.

Samsung’s new SUHD TVs will bear the ‘K’ letter, including top-end model, the KS9500. It has Quantum Dot technology and a 10-bit panel, designed to boost the colours you’ll see on screen. The set has an increased brightness capacity, although it comes nowhere near the Sony set featured below.

It has a wide viewing angle, meaning the picture shouldn’t lose colour and contrast accuracy when watched at an angle (something that we’ve found is a weakness of some Samsung sets in the past). The Samsung KS9500 also supports HDR videos available on Netflix, Amazon and other streaming services.

The KS9500, like all new 2016 Samsung TVs, will come with a refreshed Samsung Tizen smart TV system, featuring a new launcher bar at the bottom of the screen that brings together various bits of content in one place, including TV, online video and connected devices.

In addition, the set features an app that allows you to control Samsung ‘SmartThings’ devices, such as security cameras and light bulbs, from your TV. So, for example, you could automatically dim the lights when you want to watch a movie, or see who’s at the door from the comfort of your sofa. 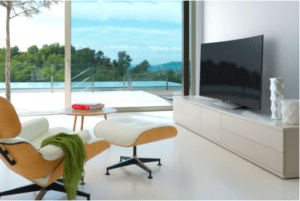 Sony has a range of new 4K televisions coming in 2016, including a selection of ultra-thin sets leading on from last year’s X900C. This includes the top-end XD93 models, which have a technology called ‘slim backlight drive’, bringing advanced dimming technology previously only seen in bulky full-array LED backlight systems to these super-skinny sets.

These TVs, and other Sony smart 4K TV models, will again come with Android-powered internet features and have a new ‘Ultra’ content portal allowing you to purchase films in 4K quality to watch on your shiny new TV.

Sony also showed off a prototype with the headline feature of a quite staggering level of brightness, going up to 4,000 nit (a measurement of brightness used in the industry). Even a current high-end TV will only go to 1,000 nit, so we are talking about a huge increase here. The idea is that the greater level of brightness will help the picture shine even more, but we know from past experience that headline tech specs don’t always bring an increase in quality. 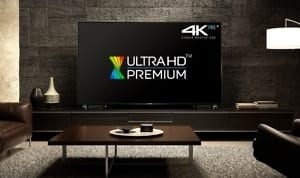 Panasonic has announced that it’s new flagship LED TV for 2016 will be the DX900. Available in 58-inch and 65-inch size variations and sitting just below Panasonic’s OLED 4K TV launched last year, this premium TV has enhanced technology for supporting a greater colour range. It can reach an impressive 1,000 nit brightness and features a new backlight dimming technology Panasonic is calling Honeycomb.

Honeycomb involves hundreds of small lighting zones that can be dimmed individually to vary the brightness of the screen, creating what is claimed to be very bright peaks and deep blacks. It also, apparently, won’t have as much of the ‘light bleed’ between dimming zones seen on some other TVs.

Although a bit chunkier than rival sets from Sony, LG and Samsung, Panasonic’s DX900 has a nice premium finish, with a stylish stand finished with brushed metal. It has Firefox OS smart TV, supports the Freeview Play TV guide and can display 4K HDR content. Also at CES, Panasonic has unveiled a UB900 Blu-ray player that can play 4K-quality discs. It will be released in the Spring, and while we don’t have pricing as yet, we’re expecting it cost quite a lot more than standard Blu-ray players.

We look forward to getting all these TVs into the lab to test out their claims later in the year.