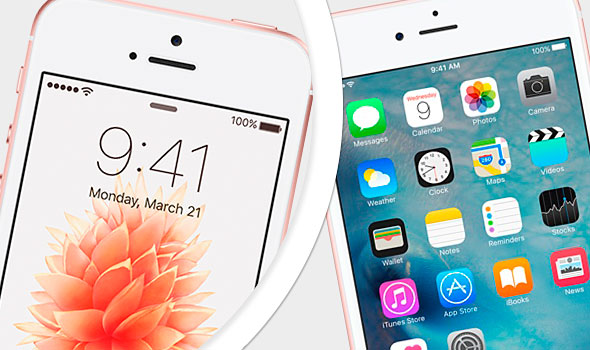 The iPhone SE is the latest addition to the iPhone family. But how does it compare to the larger iPhone 6s? We do the unthinkable and compare the siblings.

With the recent expansion of the Apple iPhone family, you may be wondering which member to go for when you next upgrade. There are certainly plenty to choose from, with the iPhone collection now consisting of the iPhone SE, 6, 6 Plus, 6s and 6s Plus.

So if you’re going for price alone the iPhone SE is the clear winner. But does it really offer great value? Read on to find out.

You can tell these phones are related thanks to the iconic iPhone look. Both come with sleek metal casing and there’s a range of colours to choose from including silver, gold, space grey and rose gold.

The most obvious difference is the size – the iPhone SE is a four-inch phone that fits comfortably into the palm of your hand. In contrast, the iPhone 6s measures 4.7-inches. While this might not be as comfortable to hold, the extra space does make it easier to tap out emails and messages.

If you’re new to larger-screen phones, we recommend trying the SE and the 6s in a shop first so you can see how they compare.

Processing power – Both models come with Apple’s latest processor – the A9. This ensures they have enough power to whip through all tasks, including the latest apps and games, without slowing down. So in terms of speed it’s a draw.

Cameras – Similarly the SE and the 6s both share the same 12Mp rear-facing camera. In our tests we found that they both capture detailed shots and colours were generally good. We did have some very slight reservations about the camera – read our full reviews to find out what they are.

Where the two differ is with the front-facing cameras. The iPhone 6s sports a 5Mp camera whereas the SE hasn’t been upgraded and keeps the 1.2Mp snapper seen on older iterations of the iPhone. Although the SE still takes good selfies it’s disappointing that it isn’t fitted with the latest tech.

Battery life – The smaller-screened SE has a 1,624mAh battery, which Apple claims will last for up to 12 hours of internet access on 3G. And on the iPhone 6s there’s a bigger 1,715mAh cell. But while on paper it looks as if the 6s should win, it’s worth noting that the larger screen on the 6s is power hungry and therefore needs a larger battery. This is reflected in Apple’s battery claims, with the company stating that the 6s will muster up to 10 hours of web browsing on 3G.

To find out exactly how long each phone managed in comparative battery tests – check out our full reviews.

Press harder – One area where the iPhone SE simply can’t compete is the tap-tastic screen. Apple unveiled its new force-sensitive screen on the iPhone 6s. It reacts to the amount of pressure you put on the screen, giving you more menu controls just from the tap of a finger. However, it’s not a revolutionary feature and it’s a not a huge loss not to see it ported over to the iPhone SE.

Which? expert view – smaller and cheaper is tempting

Everybody likes a bargain and the iPhone SE is the closest you’ll get to one within the iPhone range. Although the smaller screen makes it more fiddly to tap out text messages, I’m still a fan because it means it fits more easily into my palm (and my pocket, for that matter).

If we’re looking at specs alone, however, the 6s edges it. That’s because it has the pressure-sensitive screen and a better front-facing camera. If you find you need lots of storage to house your apps, music and photo collection, the 6s may also be a better bet as it’s the only one of the two that comes with a 128GB memory option. Nevertheless, I’ll be plumping for the SE.