If you’re looking for the best possible picture quality, most people will say you should go for an OLED TV. Replacing plasma screens as the technology found on high-end TVs, OLED screens are said to have the most vivid contrast and natural colours, and can handle motion with ease.

But is this the case for the Philips 55POS901F, the latest OLED TV to go through the Which? test lab?

What is OLED TV?

Exclusive to only the most expensive sets, OLED gets its name from the organic light-emitting diodes that illuminate the screen. Differing from traditional LED-backlit TVs, these tiny individual spots of light allow for more control over which parts of the screen are bright and which are dark.

That means in the darkest parts of the picture – a night sky, for instance – it’s almost as if the TV is completely turned off, because… well… it is.

Instead of using special test sequences to judge picture quality, we use movies to test the TVs in the same way you’d use them at home, and our experts handpick both bright and dark scenes. We choose scenes with a wide range of contrast – an overall dark picture but with bright, defined highlights, for example – to push the TVs to their limit.

In recent years, LG has been the go-to name for OLED TVs. But with more brands jumping on the bandwagon, it’s facing stiffer competition this year, namely from Sony and Panasonic.

Philips, on the other hand, has spent some time in the TV abyss; becoming better known in the UK for its budget sets which have often prioritised price over quality. It’s unique ‘Ambilight’ feature, which casts the colours on screen on to the wall behind the TV, has never really caught on. But with the 55POS901F, Philips is back with a vengeance.

Here, we have a serious rival to LG. This premium OLED TV comes with a 4K-resolution screen, which also supports High Dynamic Range content. Running Android TV – the smart TV platform developed by Google – it has a clean, modern look.

But can it live up to expectations? Read our Philips 55POS901F review to find out. 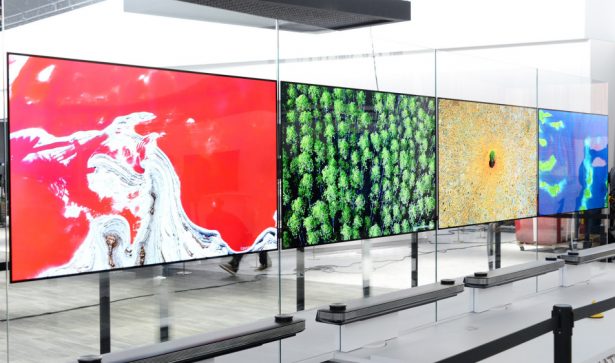 We’ve been testing OLED TVs since 2015, and continue to test more and more. Last year we put two LG OLED TVs, the OLED55C6V and the OLED55B6V, through our rigorous lab testing. These both promise the same deep blacks and vivid colours, but come with LG’s webOS smart-TV platform.

As well as better contrast, OLED TVs are said to have a number of other advantages in both picture and design. Motion is typically smooth, with hardly any blurring, and the viewing angle is wide.

Without the need for a backlight, OLED TVs can be even thinner than a smartphone. In 2017, LG unveiled the OLED W – a huge 65-inch set that is half the thickness of an iPhone 7.

But that’s not to say that OLED TVs are always better than their LED rivals – we’ve found many LED sets that out-perform OLED TVs. Check out our Best Buy TV reviews for all the top-performing sets from our testing.

The next generation of Samsung and Sony TVs revealed