Dishwasher, fridge freezer and TV manufacturers are not always providing real-world information about energy usage on their EU energy labels. This is according to an 18-month investigation led by the European Environmental Citizens Organisation for Standardisation.

It found that manufacturers sometimes test appliances on the lowest possible setting to slash the amount of energy they appear to use. At Which?, we test appliances in a way that’s a more realistic representation of how you would use them in your own home. This not only provides more relevant results, but it means we can let you know how much they’ll cost to run each year.

Read on to find out more information about our energy efficiency tests on dishwashers, fridge freezers and TVs, and our advice on what to look for so you don’t accidentally buy a costly appliance that’s also dear to run.

Or head straight to our dishwasher reviews to find the perfect dishwasher for your home.

In the investigation, which was also carried out by the European Environmental Bureau, Collaborative Labelling and Appliance Standard Program (Clasp) and Topten.eu, researchers found that dishwashers consumed up to 73% more energy if they weren’t used in the eco mode that they were normally tested on by manufacturers.

We assess dishwashers on the normal dishwasher program that most consumers use at home. We monitor how much it costs to run the dishwasher with a full load of dishes, five times a week for a year.

Instead, we’ve given each model a star rating of one to five for energy and water use, taking into account the number of place settings of each appliance. A one-star rating is the worst, and five stars is the best.

Take a look at the Which? dishwasher energy cost calculator to discover which brands offer the best value for money. It compares the purchase price with the estimated annual running cost to give you a better idea of how much it will really cost to run over its lifetime.

You can also see which dishwashers scored highest and earned our coveted Best Buy award by visiting our Best Buy dishwasher reviews. 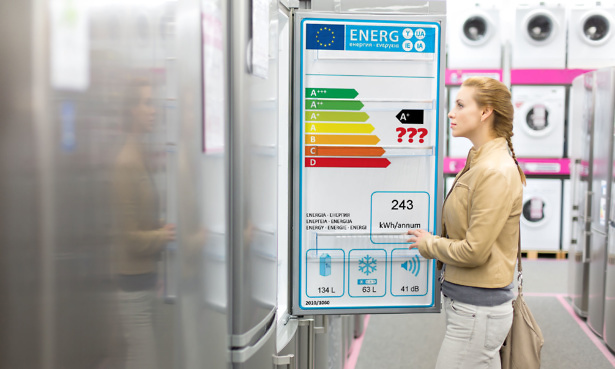 Energy use shot up by 32% during testing on half of the fridge freezers in the European investigation, most likely due to a change from eco mode to the standard program. When we’ve tested fridge freezers, we’ve found that energy costs vary massively. The most expensive we’ve tested would run up a bill of £115 per year, based on annual energy costs of 16.41p per kWh. In comparison, the cheapest would cost just £30 a year.

You can also find out how they compare with our fridge freezer reviews.

TVs were included in the European investigation, even though they generally don’t cost that much to run. However, we still measure this so that you can see how much you’ll spend on it each year. To do this, we use a multi-meter to measure power consumption in different modes, including when it’s on, in quick-start mode, when on standby and when it’s switched off.

We’ve based our testing on how you use your TV – the average TV is switched on for five hours a day and in standby for the rest of the day. The priciest TV on test costs £37 a year to run, while the least expensive costs just £6.

Throughout 2014 and 2015, we also looked at how energy consumption changed when Samsung, LG, Panasonic, Philips and Sony televisions were optimised to ensure the best picture, compared with their default setting. We found that energy consumption increased by an average of 37% on Samsung models and 18% on Philips televisions. Take a look at the graph below to see how they compare.

Want to find out which televisions offer the sharpest picture without bumping up your electricity bill? Take a look at our television reviews.