The tail end of 2017 saw a whole suite of smart speaker launches, including the Sonos One, Ultimate Ears Megablast, Amazon Echo Show and more, with Sony and JBL also getting in on the action. In 2018 we expect smart speakers to continue to launch thick and fast from even more manufacturers. Here are details of the smart speakers to expect this year.

Market analyst Canalys expects the global smart speaker market to double year on year to more than 50 million speaker sales in 2018, and it’s no longer just Amazon’s Echo and the Google Home dominating.

Electronics heavyweights Samsung and LG are entering the market this year with the launch their first smart speakers. Apple has just launched its HomePod and Google will rival this with the launch of the audio-focussed Google Home Max. So big is the potential of the new smart speaker market that new players are getting in on the action as well. Facebook is set to enter the hardware scene with large-screen speakers to rival the Amazon Echo Show, bringing its social media platform to the speaker space, and even music streaming giant Spotify could be coming into the picture.

Best Buy wireless speakers – see whether any of the smart speakers we’ve tested made the cut. 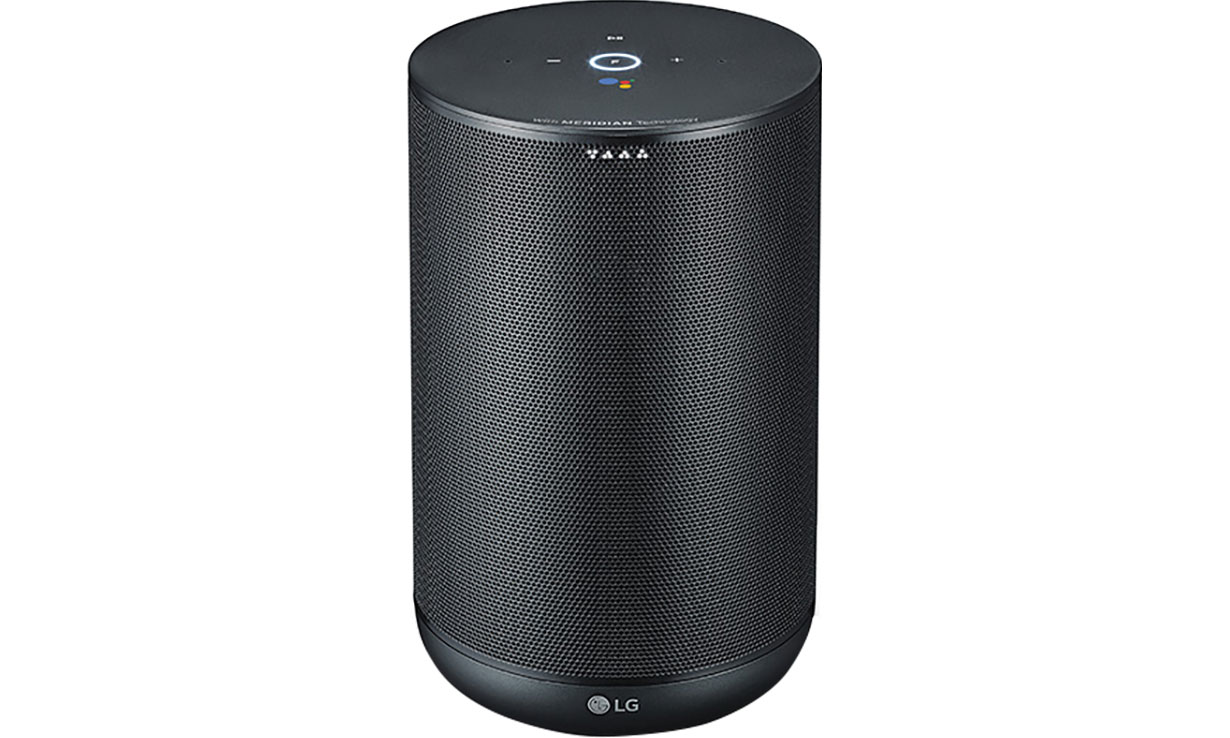 LG’s ThinQ smart speaker is due to launch this April. It’s powered by Google Assistant for voice commands, which will allow you to play music by requesting an artist or song with your voice, change the volume or even ask Google questions on topics such as the weather, news or traffic.

The ThinQ will also act as a smart hub for other LG products around your home, such as for turning on its LG purifier, and LG has teamed up with British high-fidelity audio specialists Meridian Audio to work on the sound – like Amazon did with Dolby for the Echo Show. The speaker will support lossless High Resolution Audio, a defining feature that could make the speaker popular with audiophiles.

No pricing has yet been revealed, but LG is aiming at the premium end of the market where rivals such as the Sonos One and Sony LF-S50G launched around the £200 mark. Similar to these rivals, the ThinQ’s design is a tall cylindrical shape, which helps dissipate the sound, and it has touch controls on the top.

Could the LG ThinQ be the standout Google Assistant speaker? See how previous LG wireless speakers have fared in our LG speaker reviews.

The heat has been on for Google since Amazon updated its Amazon Echo speaker range at the tail end of last year, with a particular emphasis on improving its speakers’ sound. While the Google Home 2 seems distant, the Google Home Max aims to provide a more audio-focussed companion to the Google Home. Both are controllable with your voice with Google Assistant.

Uniquely, the Google Home Max is one of the first smart speakers with stereo sound. It also has more powerful speakers than the Google Home, with a new rectangular design more akin to traditional speakers and curved edges. It can be positioned either horizontally or vertically to fit your room space.

It’s due to launch in the UK in early 2018, having already launched in the US. In the US it costs $399 and comes with a 12-month free subscription to YouTube Music for music streaming.

The Google Home Max is positioned as a rival to the music-focussed Apple HomePod, but appears to be targeting an audience more similar to those who buy the popular Beats headphones, with a strong bass compared to the more balanced sound production on the HomePod.

Powered by dual 4.5-inch high-excursion woofers, Google says the Google Home Max is as much as 20 times as powerful as the original Google Home, and it is also considerably larger. It will be available in white or black-grey and, similar to the Sonos One and Google Home, it includes room-optimisation technology. It will automatically adjust its sound output, adjusting the volume depending on where it is in your house, and will also tune itself, aiming to produce the best possible even distribution of sound throughout the room regardless of its shape. Google says it can do this within seconds.

The Google Home Max supports multi-room so you can link several of the speakers together for sound throughout your home, as well as Chromecast support so you can link to other Chromecast-enabled speakers. Unlike the HomePod, it also supports Bluetooth and aux-in, which allows you to use your Google Home Max as your dedicated speaker for other devices such as your computer or record player.

Similarly, in contrast to the restrictive Apple HomePod, the Google Home Max has support for a wide variety of music services built in, including YouTube, Spotify (notably both free and paid subscriptions), Google Play Music, Deezer and others. 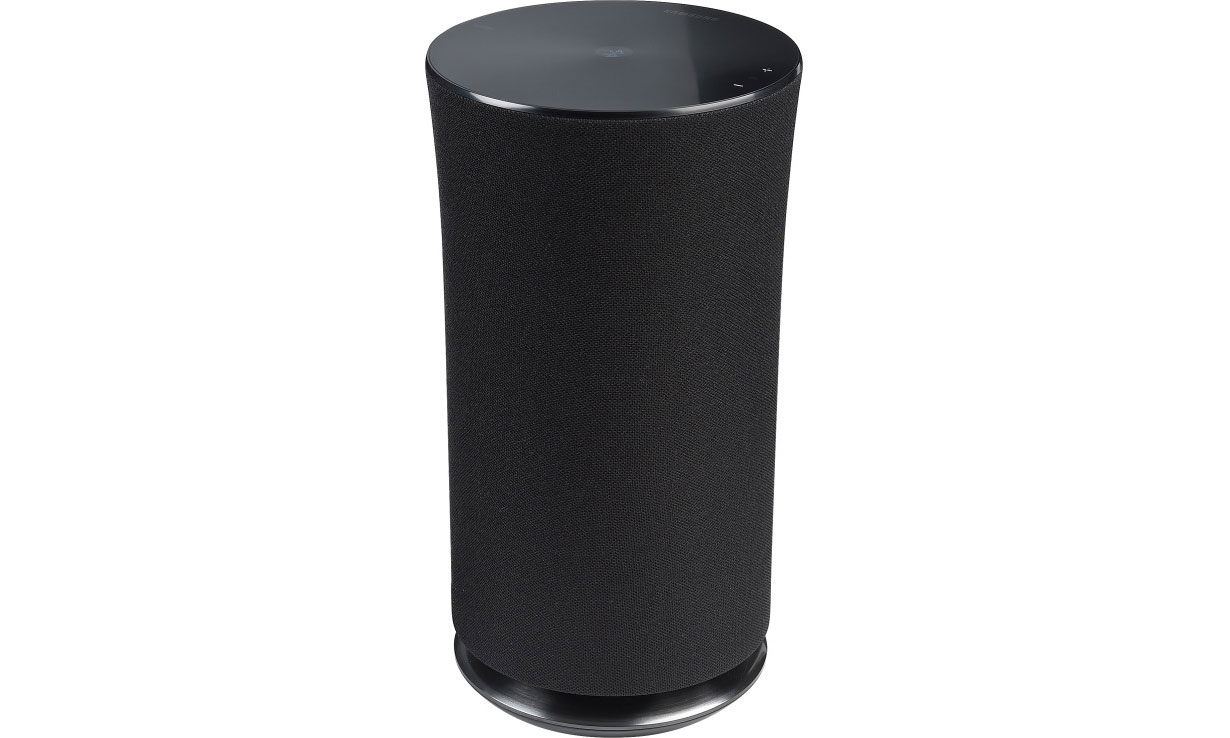 The Wall Street Journal indicates that Samsung’s smart speakers could be introduced at different pricing tiers, suggesting the premium speaker could be paired with more affordable alternatives that could better compete against cheaper smart speakers such as the Amazon Echo (2nd Gen) and Google Home – similar to Samsung’s tiered strategy with smartphones.

We would expect Samsung’s smart speakers to interface with Samsung’s SmartThings network to control smart home products around your house, such as Philips Hue smart light bulbs. The shape is also not known but many smart speakers are cylindrical and Samsung has used a similar shape before, such as with its R5 wireless speaker (pictured above). 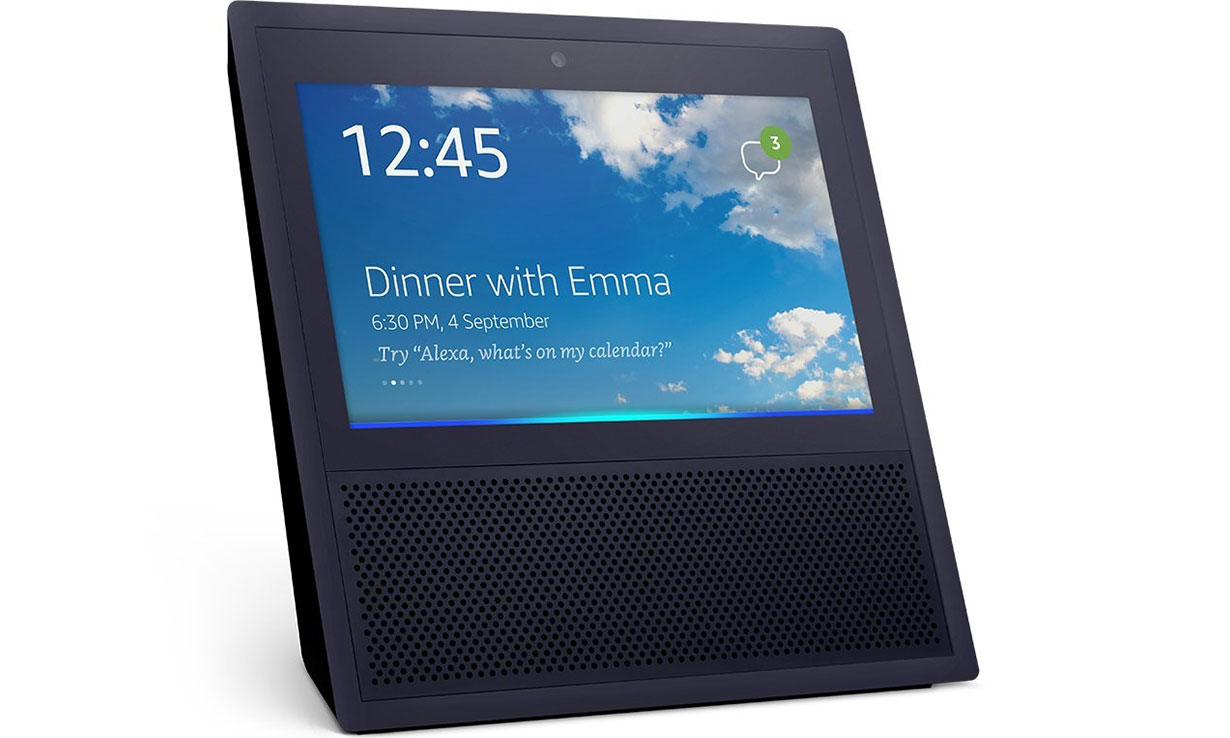 They will be social-media focussed, with video chat and Facebook integration positioning the devices as ways for family and friends to stay in touch.

One of the models is reported to be called Portal, and will have both voice control and Face ID facial recognition to identify who is accessing Facebook through its front-facing camera.

Facebook has already signed music-licensing contracts with two of the three global music giants – Universal Music and Sony, according to Patently Apple sources, which also revealed that this smart speaker is the first of an ecosystem of consumer video devices Facebook plans to launch over the next five years.

While Facebook is the world leader in social media, recent studies suggest Snapchat is beginning to outcompete Facebook in the key 12-17-year-old teen demographic. Facebook believes entering the music market with smart devices could help it reconnect with this teen audience.

Whether Spotify intends to release a smart speaker or not is uncertain, but what is clear is that it has plans to get into audio hardware, and this hardware aims to support its position as the world’s most popular music streaming service.

Another listing indicated the audio hardware will include voice control, with a Product Manager of Voice ‘responsible for the strategy and execution of Spotify’s voice efforts beyond our core apps’ including in areas such as ‘desktop, TVs, speakers, cars, wearables, headphones’.

More recent job listings, including one for a Senior Project Manager: Hardware Production, suggest Spotify is now moving towards the hardware production stage.

The move to produce hardware could be a response to many smart hardware rivals heavily promoting their own music streaming platforms. Apple has been the most aggressive, with Spotify not supported natively on either its Apple Watches or HomePod smart speaker.

Apple is not the only threat in the smart speaker space, with the two current biggest sellers of smart speakers – Amazon and Google – both having their own music streaming services to promote. Spotify may feel it needs to get into hardware to stay at the forefront in case Apple, Amazon and Google ultimately come to dominate the smart speaker market, or smart wearables market, in the future. Producing its own hardware would also give it an opportunity to directly influence the direction of audio hardware to best serve its Spotify music streaming platform.

We’ll have to wait and see what ‘category defining’ hardware product Spotify is working on.