UK vehicle safety body the DVSA has said that BMW did not initially tell it about a serious electrical fault – and then gave incorrect information. The fault was in a BMW car that was involved in a fatal car accident.

Following yesterday’s news story about BMW and the inquest into Narayan Gurung’s death, the government body responsible for UK vehicle safety, the DVSA  (Driver and Vehicle Standards Agency), has said BMW failed to make it aware of 19 cases of electrical failure between 2011 and 2014, as it is required to do under the General Product Safety Regulations.

The DVSA also claims that not only was it provided with inaccurate information about the fault in 2014, but it asked the German car manufacturer to recall 370,000 cars affected by an electrical fault in December 2016. BMW issued a recall in April 2017.

BMW is now recalling 312,000 vehicles. Affected models include both petrol and diesel versions of the BMW 1 Series, BMW 3 Series, BMW X1 and BMW Z4 built between March 2007 and September 2011. This is a large scale increase from the initial (petrol-only) 36,410 cars recalled in April 2017.

Keep reading to find out more and to see what our timeline of events reveals.

The coroner in the BMW inquest has concluded that the manufacturer was aware of a safety defect that led to the death of Narayan Gurung. She also criticised the Driver and Vehicle Standards Agency over their response.

“It’s clear the car recall system doesn’t work effectively. The DVSA and car manufacturers should be making the safety of road users a priority and there should be no delays in getting vehicles that have safety issues taken off the road and repaired immediately.

“The Government must ensure that the DVSA has the powers that it needs to hold manufacturers to account and protect people from the dangers of unsafe vehicles.”

BMW said: “This was a tragic accident and we again express our sincere condolences to Mr Gurung’s family.

“Safety is of paramount importance to BMW – nothing comes before this.

“We need to reflect on what the coroner has said this morning, including her observations about the code of practice.

“Whilst BMW considers that it has followed all the processes required by the relevant regulations, we recognise the need for the automotive industry to review relevant processes and procedures.”

See all of our expert, independent new and used car reviews.

What does the DVSA say about BMW?

DVSA chief executive, Gareth Llewelyn, said: ‘BMW did not make DVSA aware of electrical failure in its cars between 2011 and 2014.

‘It then provided us with incorrect information about the faults, so we were not able to make an informed decision. However, after examining the growing evidence, DVSA contacted BMW in December 2016 to ask it to conduct a full safety recall of the affected vehicles.

‘Our thoughts are with the family and friends of Mr Gurung.’

The DVSA does not have the power to recall cars, only to ask the manufacturer or distributor to do so. The government agency confirmed it is trying to strengthen its powers of enforcement.

The fault on affected BMW cars involves the connection between the battery and the power distribution box becoming damaged by wear and tear.

In most cases this should mean the vehicles will not start. But in extreme cases, the car will cut out while the vehicle is in motion. 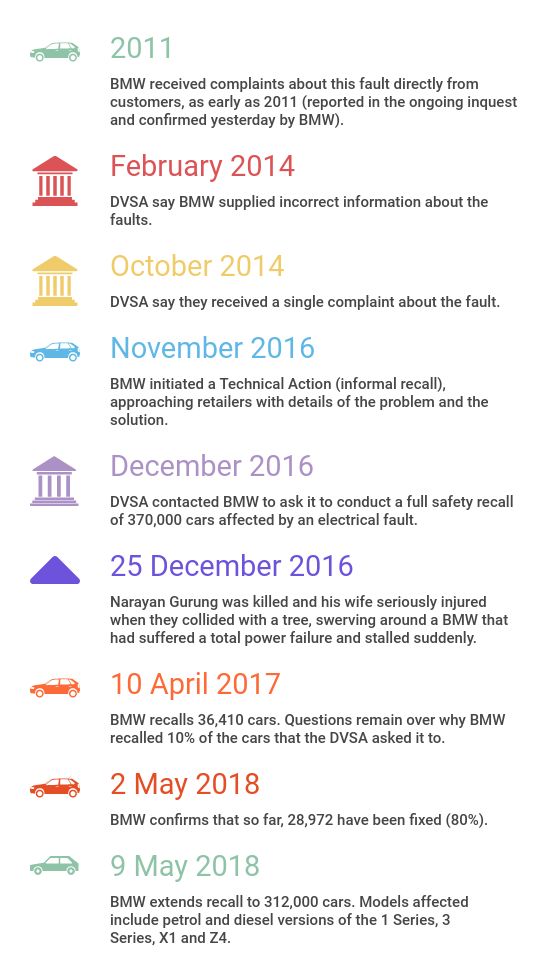 What does BMW say?

We asked BMW for comment. It said it can’t offer any more information than it provided for our previous news story, which was:

‘We are deeply saddened by this tragic incident and we extend our heartfelt sympathies to the family of Mr Gurung. As this matter is still the subject of court proceedings, we are unable to comment specifically on it.’

Which BMW cars are affected?

If you own one of these models, check with your local BMW dealer or with BMW directly. Any affected cars will be fixed for free.

The DVSA and how to check your car

In February, the DVSA launched a new service allowing consumers to check if their car has any outstanding recalls on it.

You can use the government check vehicle recall tool to see if your car is affected.