There is concern that drivers may be confused over limitations of automated driving assistance systems, after tests and research done by Euro NCAP and Thatcham Research.

A survey commissioned by the safety organisation reveals that more than half of UK car drivers believe that it’s already possible to buy a car that can drive itself.

A third of global respondents said that they would be tempted to send a text while using assisted-driving systems. And one in ten believe they can have a quick nap at the wheel.

But no car is advanced enough to be autonomous. Even if such a car did exist, it’s currently illegal to use a fully autonomous car in the UK, as drivers are required to be in control of their cars.

As technology progresses, what might be considered the first stages of automated driving systems are available today. But these systems are there to assist you, not take over. Tests conducted by Euro NCAP show that there is a potential risk of drivers becoming ‘over reliant’ on these systems.

You’ll have to do the driving yourself – but, if you’re in the market for a new set of wheels, make sure it’s one of our best cars of 2018. 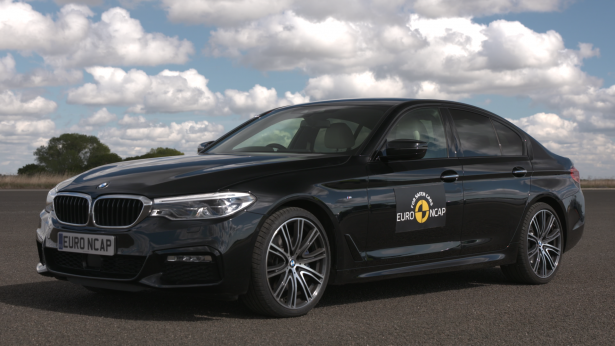 Some cars that you can buy today almost seem to drive themselves. These automated driving systems combine key active technologies:

Lane centering: the car detects road markings and attempts to keeps itself in the centre of the lane, even when cornering. This makes it feel like the car is essentially steering itself.

Adaptive cruise control: will assume a given speed, but slows and accelerates with traffic, maintaining a gap between your car and the vehicle in front.

Speed assist: Some cars also use available information and sign-reading technology to determine the local speed limit and change the car’s speed accordingly.

Euro NCAP and Thatcham Research devised a series of tests including measuring how well a car followed a curve, reacted to driver input to steer round an obstacle and dealt with cars suddenly cutting in or out of traffic.

The pioneer of automation systems within cars, it was Tesla’s Autopilot system, as found in the Model S but available in both the Model X and upcoming Model 3, that received the most criticism. This was partly for the way it operates, encouraging drivers to be over reliant on the automated driving system, but also for the way it’s being marketed. 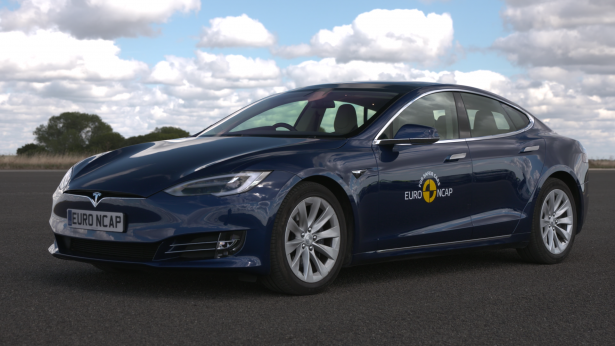 Why Tesla’s Autopilot was criticised

In the ‘pot-hole test’, cars using their automated systems drove along a straight road. Then the driver would steer round an obstacle, interrupting the lane centering, before steering back into lane and allowing the car to automatically resume control of the steering.

Almost all cars let the driver take control of the steering easily, and then resumed steering as the driver directed the back into its lane. The exception was Tesla’s Model S.

In the test, Tesla’s Autopilot system resisted the drivers input at first, and then deactivated the system completely. Euro NCAP say the system reacting in this way encourages the driver to rely on the system rather than providing their own input.

As a comparison, the new Toyota Corolla’s technology ‘readily accommodated’ the driver’s input to get around the obstacle, and then subsequently resumed assisting the driver to keep the car in lane. 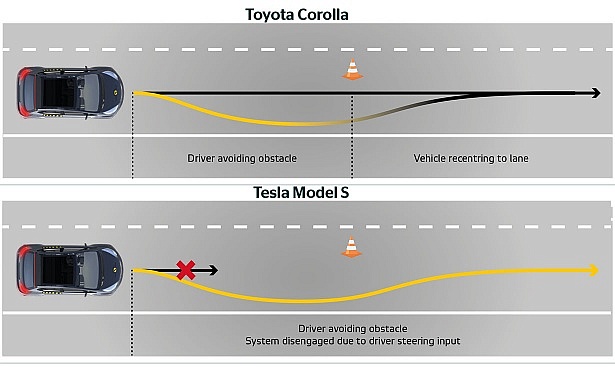 Tesla was also criticised for it’s marketing of its driver assistance system. Euro NCAP argues that its name, ‘Autopilot’, infers the car is capable of self-driving. On the webpage for the Model S on Tesla’s UK website, Thatcham criticizes Tesla for publishing the following message:

‘All Tesla vehicles produced in our factory, including Model 3, have the hardware needed for full self-driving capability at a safety level substantially greater than that of a human driver.’

Accompanying the text, there’s a video showing the car driving itself, albeit not in this country, and with a driver in place:

BMW was also criticised for having a promotional video for the 5 Series showing the the driver taking their hands off the wheel, as viewers may assume ‘that the vehicle can drive autonomously’.

No system able to deal with cars cutting in

The most challenging of Euro NCAP’s tests, this assessed whether autonomous systems could deal with two specific situations:

None of the systems tested were able to sufficiently help in these scenarios. It was summarised in the tests that crashes could only be avoided if an alert driver braked or steered away from trouble.

These challenging scenarios highlight just how important it is that the driver remains attentive and doesn’t over-rely on the system.