Samsung has announced the launch of its new flagship S10 range, which will feature four smartphones – the S10e, S10, S10+ and a 5G model.

The phones have turned heads with their 93% screen-to-body ratio, wireless battery sharing capability and 1TB of internal storage on the S10+.

We’ve taken a closer look at the new models, which will be hitting stores on 8 March 2019.

Not sure what to expect from a Samsung Galaxy smartphone? Read our guide to Samsung smartphones.

The S10 range features four new smartphones, all with flagship functionality but an edge of their own. As shown in the image, this is the full layout of the models: (from right to left) S10e, S10, and S10+. 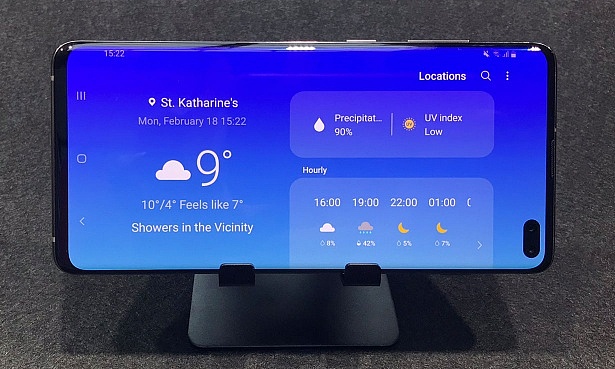 All of the smartphones in the range will have the Infinity-O, AMOLED display, describing the full display that is only interrupted by an ‘o’ shaped hole-punch design for the front camera. The more compact S10e model comes with a Full HD+ Dynamic display while the other models in the range house a Wide Quad HD+ Dynamic display. The models aren’t completely bezel-less, but there’s a noticeable improvement on the S9 range, giving a full screen experience with a show-stopping 93.1% screen-to-body ratio. 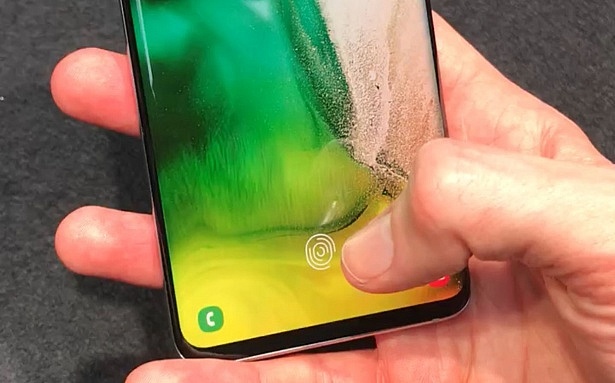 As expected, Samsung has joined rivals by placing the fingerprint sensor under the screen. It was initially tipped to be the first smartphone manufacturer to bring this technology to the market but in 2018, we saw the OnePlus 6T and Huawei Mate 20 Pro pip it to the post. Samsung’s brought more to the table though – it utilises an ultrasonic fingerprint scanner that not only captures a 3D image of your fingerprint, which is harder to duplicate than regular 2D images, but also allow your fingerprint to be detected in whatever weather conditions you’re faced with.

This is only present on the S10 and S10+ though, the S10e has a capacitive fingerprint scanner commonly seen in other smartphones.

Facial recognition remains, as well as other standard unlocking methods such as the PIN lock and pattern unlock, though iris scanning is conspicuous by its absence. 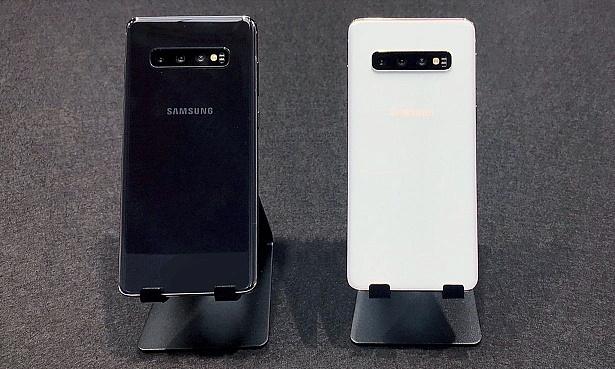 Another big boost to the S10 range is in the camera department – another essential improvement needed to keep pace with rivals. Samsung has massively improved the camera specs this year, adding a triple camera to the S10 and S10+ models, which includes a 16Mp Ultra Wide lens, 12Mp dual pixel Wide-angle lens and 10Mp telephoto lens.

The smaller S10e will come with two rear cameras, the 16Mp Ultra Wide and 12Mp dual pixel Wide-angle lenses. The front camera will also see an upgrade from the S9 range’s single 8Mp sensor, to a new dual pixel 10Mp lens. The S10+ will have a dual front camera, with both the 10Mp dual pixel lens and an 8Mp depth sensor.

Specs aside, you’ll see the benefit of these improvements when taking pictures and videos. The camera is said to be more intelligent than ever, providing increased AI recognition and additional shot suggestions when taking photos. Capturing moving videos will also benefit from the new Super Steady Video feature, which helps to stabilise moving footage while you’re recording.

Every model in the range has a different battery capacity ranging from 3,100mAh in the S10e to 4,100mAh in the S10+, breaking the standard set by the Galaxy Note 9. One thing we all want to know is how good the battery actually performs. It’s claimed that as the new range has Fast Charge 2.0, the phones can sprint up to 50% charge in only 30 minutes. We’ll be sending them straight off the lab after their release to find out if this is fact or fiction.

Samsung has also introduced a new feature aptly named Wireless PowerShare. By placing the new wireless Samsung Galaxy Buds, Samsung Watch or other compatible device next to the phone, you can share battery to wirelessly charge these device. No longer will you have to worry about charging all your electronic devices before you leave the house – just charge one and share the love.

5. One UI, gaming technology and that beloved headphone jack 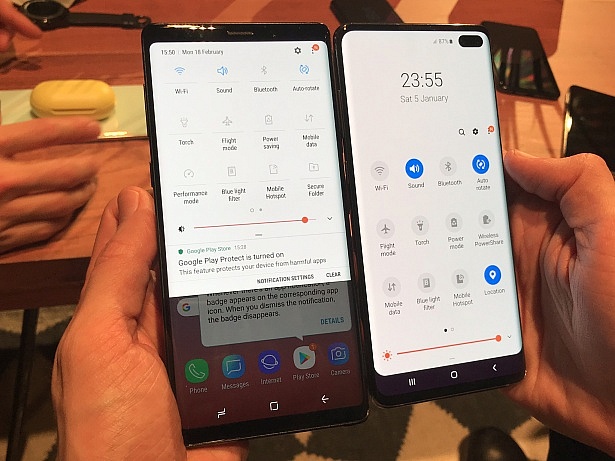 At the end of 2018, Samsung introduced One UI, its skin for the Android operating system that’s personalised for Samsung Galaxy smartphones. One UI has been rolled out on the Galaxy Note 9 but Samsung has included some optimisations in line with its new releases.

AI technology will be amped up to include features such as remembering apps you use at different times in the day and killing apps you’re not using in the background to save power. Other tweaks include the use of bigger icons and different groupings in the Settings menu, such as combining lock and security menus together.

For gamers, Samsung has teamed up with Unity game engine to optimise the gaming experience on the phone as well as introducing Dolby Atmos Gaming for the first time ever, and to match the incorporation of Dolby Atmos Sound. To make sure your phone can cope with this new gaming technology, there is a cooling system under the hood aiming to prevent overheating and dreaded game disruption.

And last but by no means least, that all-important 3.5mm headphone jack keeps its place for at least one more generation of Samsung phones.

The S10s will be available in a range of colours: Black, White, Green, Blue and Yellow.

What else can you expect from Samsung in 2019? 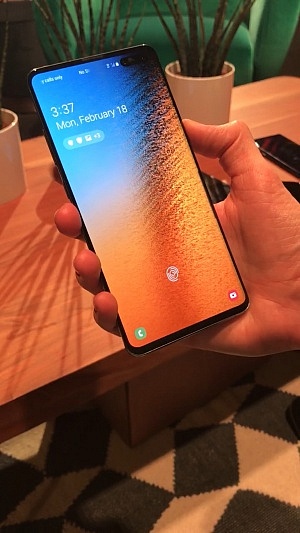 You may have seen the buzz about 5G lately and wondered whether it’s really going to happen anytime soon. Well, Samsung seems to have made that decision for us all by revealing its S10 5G, the first 5G smartphone in 2019. There are a few standout specs on this device but it’s only right to start with the unbelievably-large 6.7-inch Wide Quad HD+ Dynamic AMOLED display.

This phone is anything but discreet and its internal specs are no different. It’s got a 4,500mAh battery and a quadruple rear camera with a 3D depth sensor, 16Mp Ultra Wide lens, 12Mp dual pixel wide-angle lens and 12Mp telephoto lens. You can also look forward to a starting storage of 256GB and an Ultrasonic in-screen fingerprint scanner.

The S10 5G is slated for a summer release, which should be around the time 5G makes an appearance in the UK.

After what’s felt like months of buzz, Samsung has also announced a ‘new category of mobile technology’ – the Samsung Fold. The Fold does exactly what it says on the tin; it’s a foldable smartphone that doubles as a tablet. It will have a 7.3-inch flexible screen which becomes a 4.6-inch display once you fold it over.

Predictably, the phone is big on price as well – at £1,700 it’s the priciest smartphone we’ve seen by a landslide. But is this level innovation worth it? We’ll be taking a closer look over the coming days.

Upgrading last year’s Gear IconX are the Samsung Galaxy Buds. With sound by AKG and a number of new audio tricks and technologies designed to enhance sound depending on how you’re using them, these promise to be a noticeable upgrade over previous models.

Samsung claims improved battery life – up to five hours of calls, or six hours of music on a single charge. They’ll also have Bixby built in, for those who’ve found a way to make friends with Samsung’s assistant.

Samsung wasn’t finished there – it also introduced two new wearables. The Watch Active is more of a traditional smartwatch but as the name suggests, has a strong focus on fitness.

Alternatively, the Galaxy Fit is an uber-lightweight fitness tracker that claims up to a week of battery life from a single charge.

Samsung says both devices can automatically recognise up to six of your favourite activities, streamlining the tracking process without you having to intervene.

Keep your eyes peeled for the results of all this new tech when it arrives back from our labs.