Some of the worst car breakdown cover companies could leave you stranded at the side of the road for hours, and then still not be able to fix your car without towing you to a garage. Meanwhile, opting for the most basic package could mean you’re not covered if you breakdown near your home.

We’ve surveyed thousands of people* who had called out a breakdown service to find out how they would rate their provider for factors such as value for money and response time. We’ve also found out the potential costs of breaking down without the right cover in place.

Read on to find out what makes the top-scoring providers the best and why choosing the right type of cover could save you hundreds of pounds.

Alternatively, jump straight to the best and worst breakdown providers.

Our table below shows the scores for the three third-party providers that topped our table and the three at the bottom, so you can see the stark difference between the best and the worst. 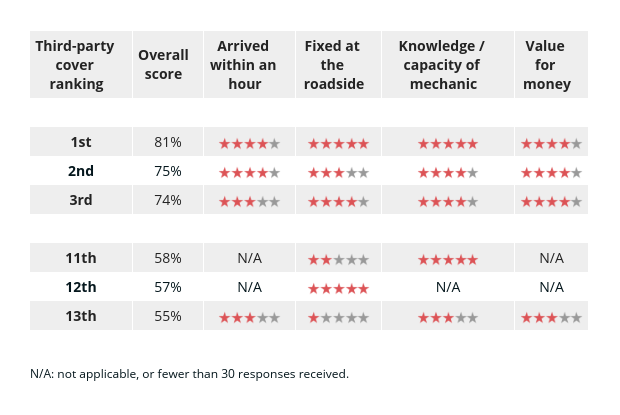 The highest-scoring company sits up top after receiving two full five-star ratings – the only breakdown provider to achieve this.

Its customers were mostly impressed with the mechanics’ capabilities, and seven out of 10 respondents also reported that their car was fixed there and then at roadside. More than eight in 10 of its customers who responded to our survey told us it arrived in under an hour.

At the other end of the scoreboard, the worst provider didn’t score higher than three stars in any area. It also received just one star out of five for roadside fixes after a hefty 73% of its customers said they had to be towed to a garage. This is despite the company’s own website claiming it fixed over 75% of breakdowns by the road.

Including third-party and manufacturer cover, we rated 27 services in total this year to find the six best breakdown companies for 2019.

Do I need breakdown cover at home?

Most basic packages won’t cover you if you break down within a quarter of a mile of your home. But, surprisingly, this is the most common place you’ll need assistance: almost four in ten people called a breakdown service to their home, according to our survey.

If this happens to you, most companies will let you upgrade on the spot – but it won’t come cheap. Not got breakdown cover? You’ll also have the option of signing up from scratch.

We asked the AA, Green Flag and the RAC how much it would cost you to sign up or upgrade your cover. Our graphic below reveals the results: 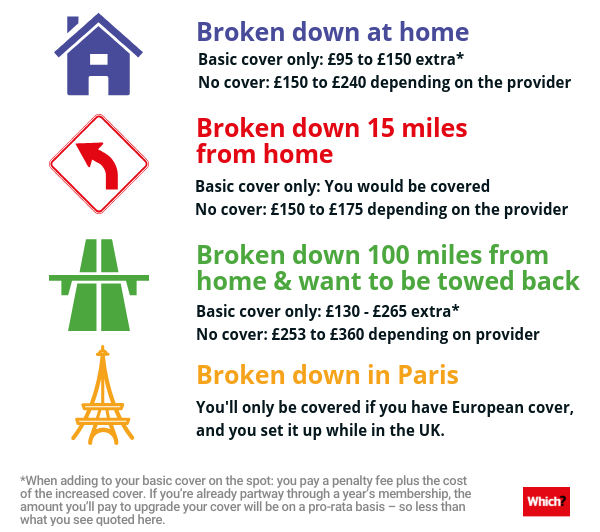 Find out more, including how to cut the cost of your cover: see how to buy the best breakdown cover.