More than a quarter of vulnerable people across the UK are still struggling to get the food they need, according to new Which? research.

In early May, we called for urgent government action to help vulnerable households access food.

Yet when we surveyed people between 29 May and 17 June about their experiences over the previous seven days, we found that a shocking proportion of situationally and clinically vulnerable people continue to struggle with accessing groceries.

Despite it now being more than 100 days since lockdown began, our survey uncovered that:

Which? is now calling on each of the UK’s four governments to set out a clear plan by the end of July for ensuring that all vulnerable consumers can access the food they need.

With shielding measures due to end soon in some parts of the UK, food parcels and other support for those who need it must be extended to avoid millions of people being left behind if support is suddenly withdrawn.

Here, we look at what this latest research reveals about the situation for vulnerable people in the UK. We also hear from some of those that have been affected.

Two in five of those who are situationally vulnerable (that is, not clinically vulnerable to coronavirus but in need of support with shopping because, for example, they’re blind) had faced difficulties accessing groceries in the seven days before they were surveyed. This group had struggled the most of any of the vulnerable groups we spoke to.

In Wales and Scotland, this number was nearly half (47% and 46% respectively), compared with 38% in Northern Ireland and more than a quarter in England.

At the beginning of lockdown, Janet developed shingles. This isn’t on the NHS list of conditions that put you in the clinically vulnerable group, but Janet doesn’t feel safe shopping in store.

In the first few weeks of the lockdown, she was able to get an online delivery slot and then began to use a supermarket click-and-collect service.

Now, she is unable to find a slot for a month. She has contacted the local supermarket, but it was unable to help.

Janet said: ‘I am being forced to go into the supermarket because I can’t get a slot.’

These findings come after hundreds of disabled people who weren’t included on the coronavirus clinically vulnerable list, including those with sight loss and agoraphobia, took legal action against the UK’s major supermarkets for breaching the Equality Act 2010. The claimants said that supermarkets had not made reasonable adjustments to enable them to access groceries.

Supermarket priority slots have been reserved for those on the government’s list of clinically extremely vulnerable people – known as the shielded group.

But we heard from many non-clinically vulnerable people who rely on home deliveries whose regular slots had been cancelled without warning.

Vulnerable people and those who care for them spent days struggling to get through to supermarket helplines, or were told they weren’t eligible for a delivery slot.

‘A dreadful waste of time’ 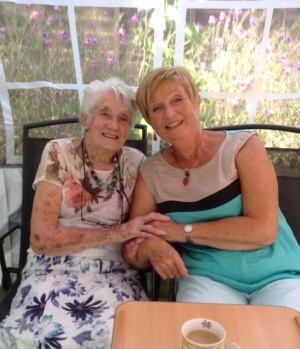 Prior to the coronavirus pandemic, the home had two Tesco deliveries a week.

These were removed completely after supermarkets implemented restrictions on deliveries, and staff had no choice but to visit the store.

As there were limits on the number of items people could buy in store, staff from the home had to queue at the supermarket two or three times a day to be able to buy sufficient amounts of milk, bread, fruit and vegetables for the elderly residents.

Sue said: ‘This was a dreadful waste of time for people under masses of pressure already, and mixing with the public was exactly what they were desperate to avoid.’

Initially, Sue was offered a priority slot by Sainsbury’s, having bought her vulnerable mother’s groceries online before she moved to the home, and she placed as many orders as she could to help them access vital groceries. This only lasted for two weeks before Sainsbury’s changed its policy to give slots only to those that were shielding.

Sue told us that she continued to try to access slots, searching throughout the night for weeks.

A letter from a GP allowed the home to buy more items at a time at the supermarket. They have now been given one weekly delivery slot with a maximum of 80 items per order. This means staff still have to visit the supermarket as they can’t order sufficient supplies.

Even among the UK’s shielded group – those who are at the greatest risk from coronavirus and who have been asked to stay at home – 29% said they hadn’t been able to access the groceries they needed in the week before they were surveyed.

This figure was highest in England, where 33% had struggled, while it affected 31% in Northern Ireland, 27% in Scotland and 25% in Wales.

The UK’s four governments have implemented measures aimed at offering assistance to this group, including priority supermarket delivery slots and free food parcels, but 70% told us they had found getting groceries more difficult than before lockdown.

Shockingly, 14% of extremely clinically vulnerable people told us they had been going out to the supermarket to shop for themselves.

Just 16% of shielding people across the UK had received support accessing groceries through their local authority – and in Northern Ireland and Wales this figure was as low as 4%.

We’ve heard from shielding people that registered as needing support being left for weeks without the help they desperately needed.

‘I registered my mother-in-law, aged 93, as extremely vulnerable in week one of lockdown. She received her first food parcel on week 11!

‘Luckily her neighbours saw her need for help and started doing some shopping for her before this, otherwise she could well have starved.’

While it does appear that the situation has improved for many clinically extremely vulnerable people, there is still an unacceptably high proportion for whom the current measures aren’t working. And with changes to support schemes imminent, we want to see firm commitments from the UK’s governments for continued support.

While officials say changes to the shielding guidance will only happen if the rate of community transmission remains low, the governments in both England and Northern Ireland have said that free essential food boxes will stop being delivered at the end of July.

In both of these nations, those considered high risk will still qualify for priority online supermarket delivery slots as well as being offered help with medicine deliveries and getting to medical appointments.

Which? is concerned that while the easing of lockdown restrictions may make life easier for people who are comfortable and able to go into shops again, there is still a huge risk that many of those who have already been struggling will now be cut further adrift. These people may still not be able to leave their homes to get groceries, especially if it involves long queues, taking a taxi or using public transport.

Half of all consumers told us in June that they don’t feel confident about returning to shops as lockdown eases, and this figure is likely to be higher for those who have been shielding or self-isolating.

Which? believes that access to free food boxes, priority delivery slots and other relevant assistance should continue for as long as medical advice or practical restrictions, such as social distancing, are in place.

The help should be extended to include not only the most clinically at-risk but also those who identify as vulnerable but have so far been sidelined.

Central and local governments need to accurately assess and identify which consumers are self-isolating so that they can also be given access to specific support, such as priority supermarket delivery slots or local food provision through other means.

Sue Davies, head of consumer protection and food policy at Which?, said: ‘It is a real concern that, 100 days into lockdown, the current system of food provision is still not working for so many of those who need it the most.

‘Vulnerable people could now be looking at a cliff edge where shielding restrictions are lifted and they are left to fend for themselves, cut off from outside help in getting essential groceries.

‘Which? is now calling for the UK’s four governments to work with the food industry, local authorities and charities to ensure that a long-term plan for supporting all of those who are at risk is in place by the end of July, so that no vulnerable person faces difficulties in accessing the basic food supplies they need.’