With summer approaching at high speed, you might be thinking that now is the time to treat yourself to a new barbecue. If you like the convenience of gas but the smoky taste of charcoal, a dual fuel model could be a good choice.

They’ve been on the market for a little while now, and it looks like dual fuel barbecues are finally starting to get a little more popular. They come in a couple of different forms and at a range of price points too.

We’ve rounded up a few dual fuel models we’ve recently tested, as well as some of the pros and cons of these types of barbecues, to help you make a more informed decision.

Head to our Best Buy barbecues if you want to see which models we recommend. 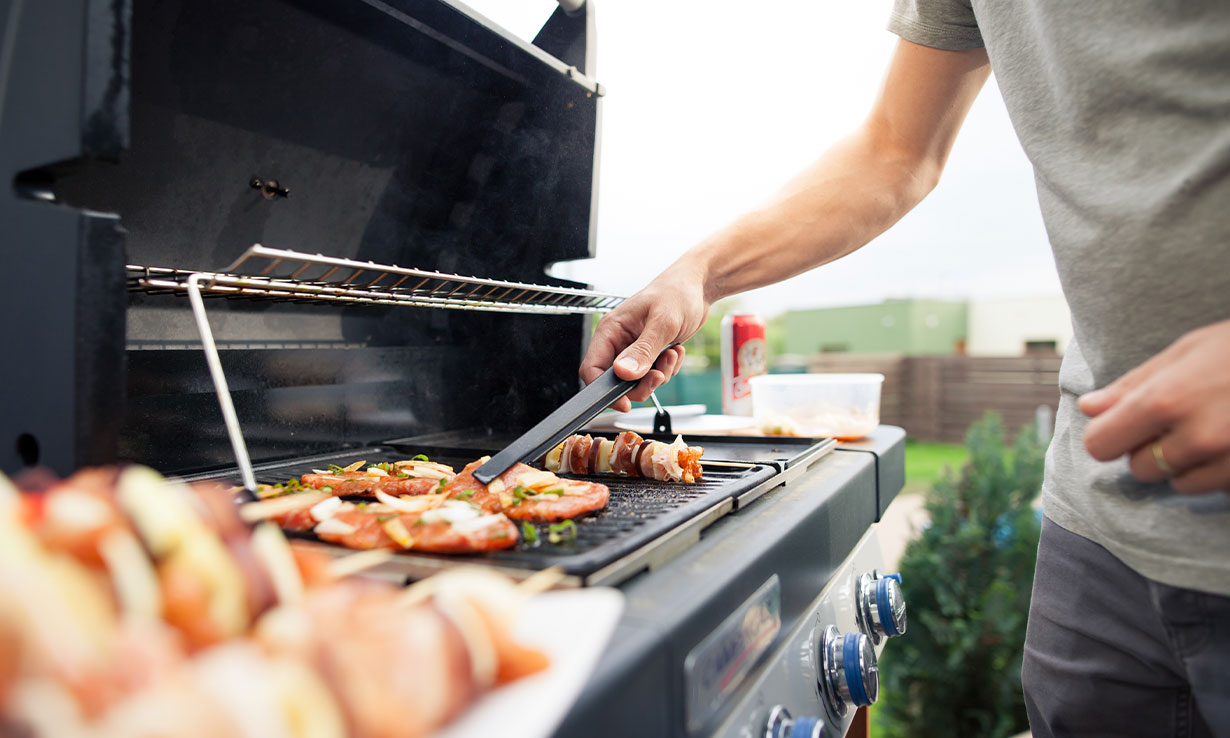 Most barbecue manufacturers will claim that dual fuel barbecues are ‘the best of both worlds’, allowing you to reap the benefits of both gas and charcoal models without having to commit to one type.

We outline the main pros and cons of dual fuel barbecues below. 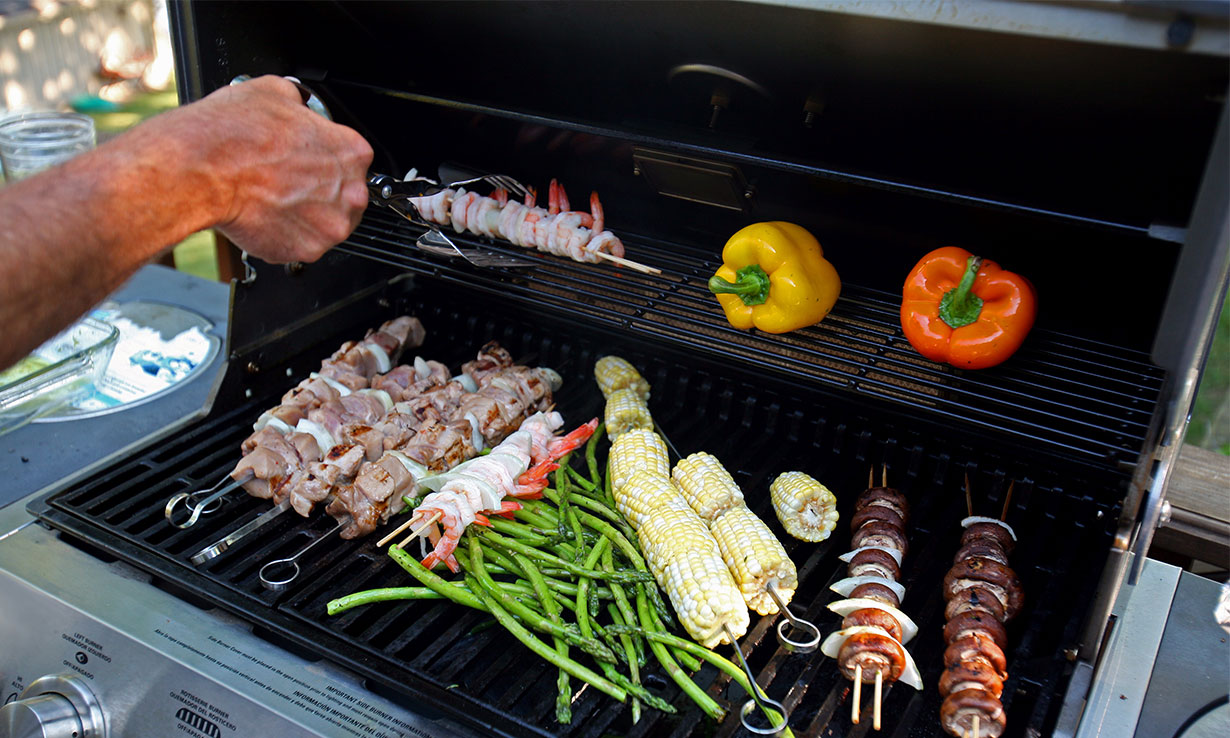 There’s no way of saying for sure that dual fuel barbecues can produce better-tasting food than other models, mainly because a lot of the time it will depend on the different grilling methods people use.

Our lab tests do show that charcoal barbecues tend to score higher than gas or electric models in our cooking tests, so if you mainly plan on using your dual fuel model for charcoal cooking then you might be in luck.

However, that isn’t to say that gas barbecues don’t produce delicious food either. They often do, and they’re much quicker than their charcoal counterparts, however it’s very rare to get any kind of smoky barbecue taste when your food is cooked on gas.

Read our guide on how to cook on your barbecue and find out how to impress your friends and family at your next garden party.

In our latest rounds of tests, we’ve encountered a handful of dual fuel or ‘hybrid’ barbecues. Here’s what each of them has to offer. 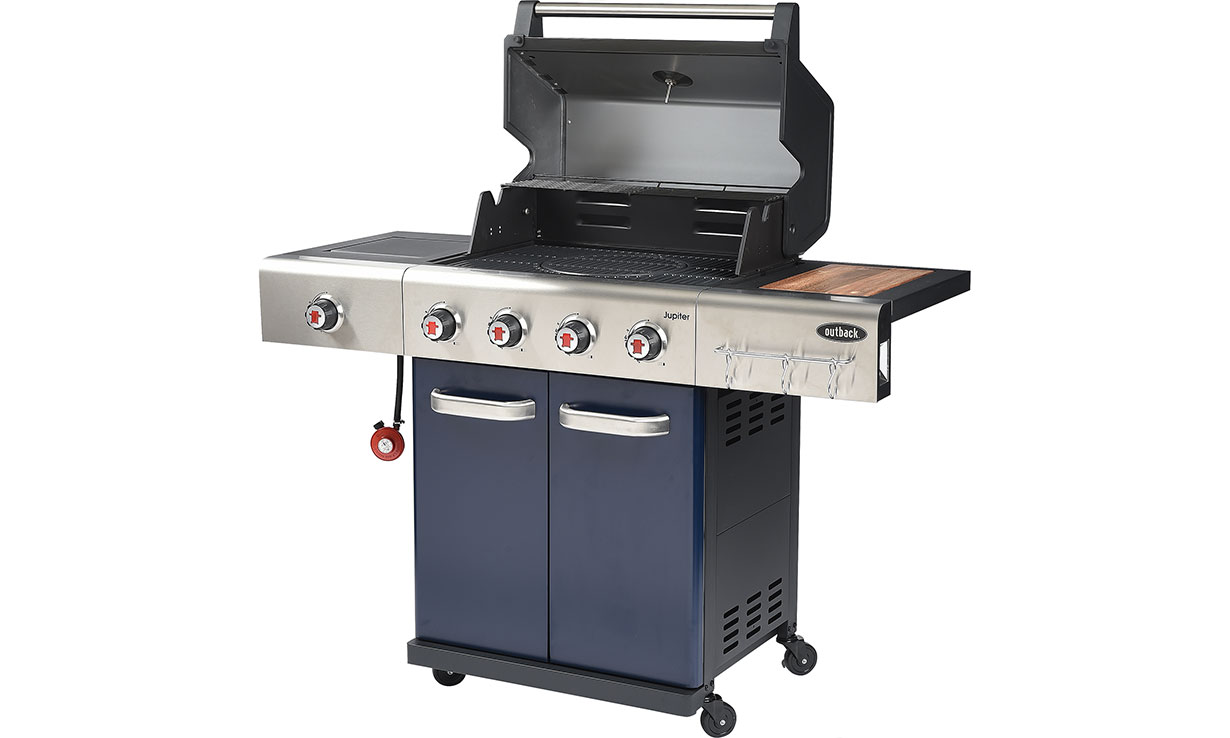 This Outback hybrid barbecue is brand new for 2021 and is an updated version of one of their slightly older models. It has four stainless steel burners and a separate hybrid charcoal basket designed to give your food a delicious smoky flavour.

The cooking area is split up into three cast iron grills, and you can remove the central section to use any of the additional accessories such as the pizza stone, wok or griddle. These don’t come in the box so you’ll have to purchase them separately.

It has a stainless steel roasting hood with a built-in temperature gauge so you can make sure the grill is never too hot or cold. There’s a warming rack too, meaning you can serve all of your food at once without leaving half of it to sit out and go cold.

It certainly sounds like the full package, but did this hybrid model impress in our rigorous lab tests? Read our full Outback Jupiter 4 Burner Hybrid review to find out. 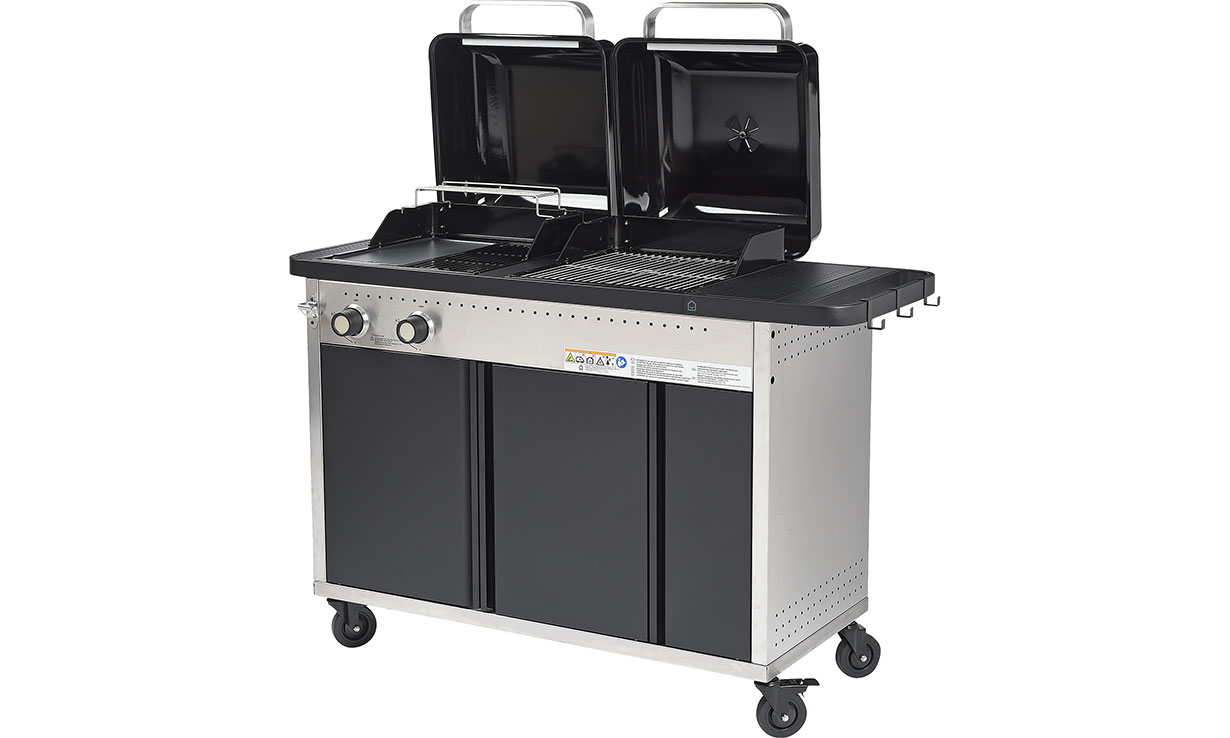 This stylish-looking B&Q model might catch your eye if you’ve got a large family, as it can supposedly grill for up to 14 people at the same time. You can use both the gas and charcoal burners at the same time, and they each have their own lids that close independently.

There’s lots of storage underneath the grill so you can squeeze in everything you might need, and it’s all protected by two full-coverage doors. There’s also a side table next to the charcoal grill as well as hooks for your grilling tools and a handy built-in bottle opener.

Unlike some other barbecues we’ve tested, this one has four wheels on the base rather than two, which should make it nice and easy to move around your garden. All of the grills are dishwasher-safe too, meaning less time scrubbing and more time relaxing.

This barbecue sounds like a great deal, but will it actually help you to grill delicious-tasting food? Head to our full B&Q Rockwell Hybrid review to see what we thought of it. 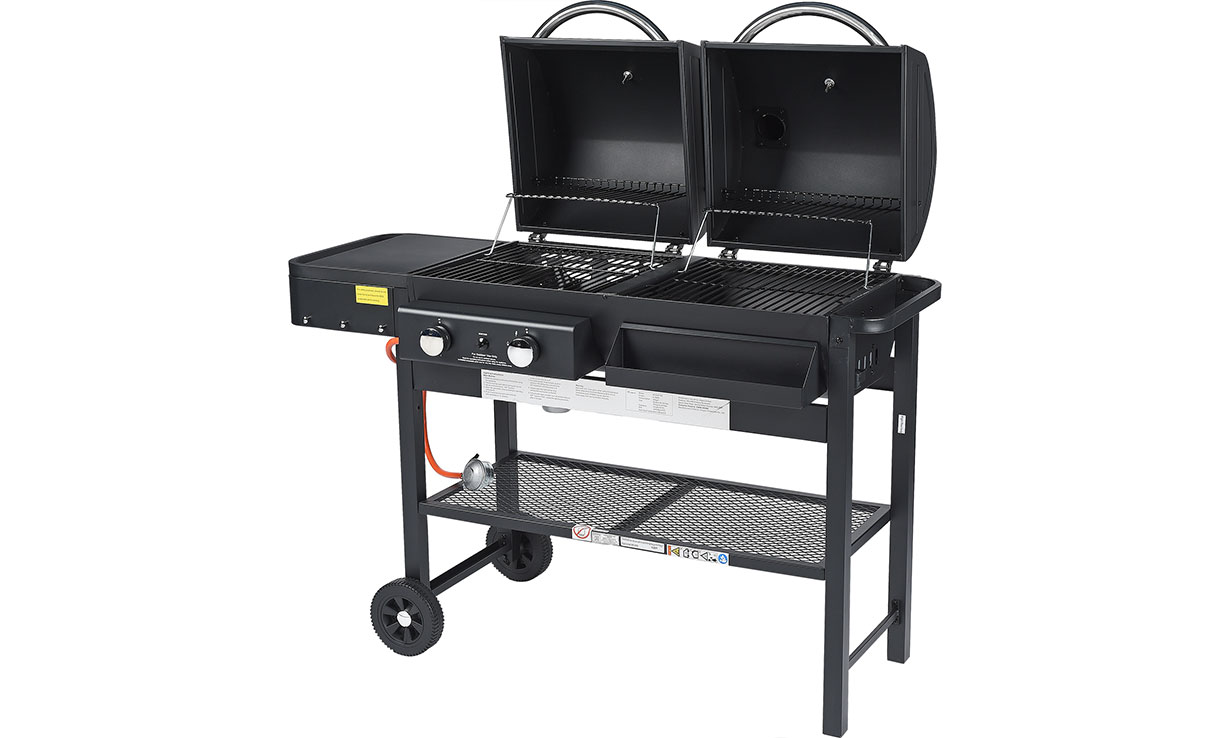 The cheapest dual fuel barbecue we’ve tested by quite some margin, this affordable model has two separate burners – one gas and one charcoal. It suitable for both propane and butane gas, but if you want to use butane you’ll need to buy a separate regulator.

Each burner has a separate hood with a built-in temperature gauge, allowing you to ensure your food isn’t burning without having to open and close the lid every two minutes. There’s a handy chopping board to the left of the gas grill, as well as tea towel hooks and storage for herbs and spices underneath.

It’s not the largest barbecue we’ve seen but it is on the bulky side. There are two wheels on the base to help you move it around your garden though.

Take a look at our full Argos Premium Combination Barbecue review to see how it fared in our labs, including how easy it is to use. 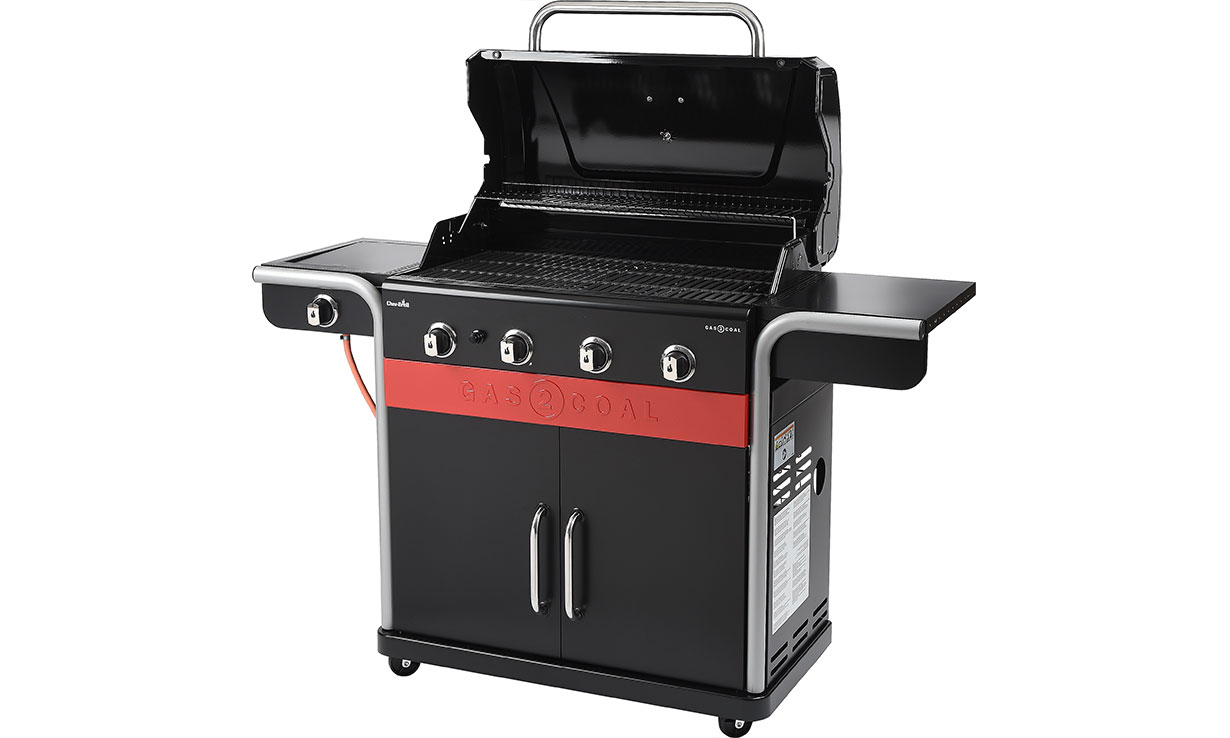 Char-Broil calls this hybrid grill ‘the solution for everyone who can’t decide’, and it’s easy to see why. It converts from a gas grill into a charcoal grill in less than one minute, or you can use both cooking methods at the same time thanks to the two separate grill trays.

There’s a built-in side burner that’s perfect for warming up side dishes and sauces to serve alongside your barbecue creations, plus a side shelf that you can use as a little bit of extra workspace while you cook. There’s enough space under the grill for an 8kg gas tank too.

Find out if this barbecue does produce delicious, smoky food in our full Char-Broil Gas2Coal review.