Should I buy an air conditioner?

Do you really need an air conditioner? Or are you better off with a more basic electric fan? This guide will help you choose the best way to cool your home.
CW
Christina Woodger
In this article

Only 8% of Which? members own a standalone air conditioner. With hotter summers becoming the norm, that number could be set to increase – so do you need one? Or would an electric fan be more than adequate for your needs?

Do I really need an air conditioner?

We surveyed Which? members in 2019 to find out whether they owned a portable air conditioner and why. Only 8% of members did, which isn't a huge surprise, given the British weather.

Many of those who do own one told us that they only use it rarely, on days that are really roasting hot, or on muggy summer nights to make it easier to sleep. Some told us that they had a chalet-style house or an attic conversion bedroom and found it hard to cool these rooms without air conditioning.

A few people us that they used their appliance for heating on cooler days, or as a dehumidifier, as it came with these functions too.

One member told us: 'I use it daily – it cools the bedrooms in summer and supplements the heating in winter, plus it dehumidifies. Splendid investment – I've had it nearly 20 years'.

Another reason for some members was to cool their conservatory so that 'tender plants are not compromised'. And no wonder. With glass windows and a glass roof, these can easily get up to sweltering temperatures in the summer.

If you like the idea of an air conditioner to help stop you passing out from the heat, make sure you pick one that will do the job quietly and efficiently with our portable air conditioner reviews

Reasons for not owning an air conditioner

Of the 92% in our survey who don't own a standalone air conditioner, by far the most popular reasons was simply not feeling the need to have one in this climate. Many that did one found they rarely got much out of, with some saying they only used it for about a week a year.

Other reasons for not owning one included the high cost, the potential environmental implications of high energy consumption, the noise and the fear of having dry eyes as a result.

Another obstacle worth considering is where you'll store your unit when not in use; most air conditioners are about the size of an under-counter fridge.

Several members who owned air conditioners told us that they rarely bothered using them due to the hassle involved in getting them out of storage. As one said: 'I use it very seldom. It's portable, on wheels, but a lot of hassle to wheel to an appropriate position where it cools the required area but is close enough to the window for the exhaust'.

And the window sealing kits typically supplies with air conditioners will only work with certain types of window, such as sliding windows. You can still use a portable air conditioner with another type of window, but more hot air will be coming in for the machine to try to cool.

Some members have had to get creative here. One told us 'We use it very rarely – not in the past five years. When we put the hose out of the window we have to block the rest of the opening with towels to stop the hot air blowing back in'.

How to buy an air conditioner

Air conditioners use a refrigerant to absorb heat from a room and cool the air, rather than just moving the existing air around, as electric fans do. This is why they're much more expensive than electric fans, but also much more effective at cooling a room.

Electric fans don't actually lower the temperature in your room; they just make you feel cooler and more refreshed.

Standalone or portable air conditioners generally start from about £350. Split-unit models (which comprise fixed interior and exterior units, and require professional installation) will cost you upwards of £500, excluding installation fees.

Key air conditioner features to look out for are:

What other options are there for cooling my home?

Air coolers look a bit like dehumidifiers and are generally pretty portable. They draw in warm air and cool it using water that is stored in a tank. Air coolers don't require installation and do not need to be vented through a window like portable air conditioners. They are much less effective than air conditioners, though.

Air cooler features to look out for:

Electric fans come in many shapes and sizes. They range from basic models right up to the expensive and multi-functional Dyson Hot & Cool, which doubles as an electric heater.

There are three main types. Desk fans, as their name suggests, are smaller fans designed to sit on a desk or table and cool you while you sit close by, while pedestal and tower fans are designed for a whole room.

Fans use just a fraction of the energy that air conditioners guzzle, as they only have to rotate lightweight blades. But while they may help your room fell less muggy, they only move the air around rather than actually cooling it.

Read our reviews of electric fans to find one that suits your needs.

Portable fan features to look out for:

Other ways to stay cool

There are a few useful things you can to cool down in hot weather without having to invest in new equipment.

In short, yes. All the models we've tested were able to lower the room temperature. What separates poor air conditioners from the best is how quickly and quietly they work, how easy they are to set up and how energy-efficient they are.

Most models will offer a choice of settings for different conditions. On a cooler day, for example, you can use a fan-only setting to help freshen up your room. If the weather’s particularly sticky one day, you can use the dehumidifier option, if there is one, to make it less humid.

But there are some downsides. They’re noisy and energy-hungry, and they take up quite a bit of space. Fixed, split models are quieter and more efficient, but need to be permanently installed in just one room.

For most people in the UK, particularly those with small homes or with reduced strength to heave an air con about, an electric fan will be best.

How much energy do air conditioners use?

Our data shows that portable air conditioners use as much energy per hour as a typical fridge freezer uses in one day. In their defence, you’ll probably use them for only a few hours each day – but this can still easily add up.

The energy efficiency of an air conditioner is usually measured by its energy efficiency ratio (EER). This is the ratio between the cooling capacity, in British thermal units per hour (BTU), and the power input, in watts. Generally the higher the EER, the more energy-efficient the air conditioner, although the actual BTU delivered by a machine can vary.

Is air conditioning bad for the environment?

Portable air conditioners take a lot of electricity to run. As global climate change increases, and UK summers get hotter and longer, there will be growing demand for air conditioning, leading to higher electricity consumption.

This in turn may increase the amount of fossil fuels burned, thus increasing the rate of climate change, and potentially increasing the demand for air conditioners. This risks becoming a vicious circle.

Can you hire or rent an air conditioner?

Yes. There are lots of companies that rent out portable air conditioners.

Trying out a portable model before you buy could save you a costly mistake. For instance, you may not realise how much noise they can make. At their quietest, they sound like a fridge on its cooling cycle, and some are really noisy, rattling and gurgling away.

Renting can also show you how much space a portable model will take up in your home.

Rental prices typically start from about £60 per week for a compact, lower-powered model, all the way up to £200+ for higher-powered units. As such, if you plan on using it for more than four weeks, buying would be a better option, if you have the storage space. 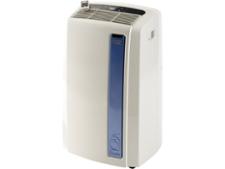 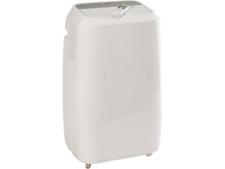 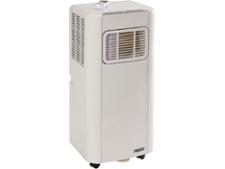