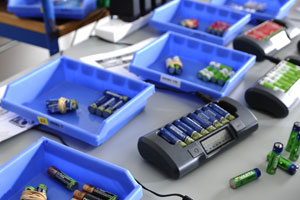 Technological advances are making rechargeable batteries more appealing than ever. But which hybrid and high-capacity rechargeables lasted the longest in tough Which? lab tests?

Which? has put several high-capacity batteries – including one ‘ultra-high’ capacity battery – to the test to see which last the longest in high-drain conditions.

Our experts have also tested several new hybrid batteries, which come pre-charged so you can use them straight from the packet. Brands tested include Energizer, Duracell, GP, Ansmann, Uniross and Maplin.

You can see full test results for all 16 batteries tested – and find out which batteries scored well enough to become Best Buys in our rechargeable batteries review.

The hybrid batteries Which? tested last year typically lasted between six and six and a half hours in our lab tests (compared with nearly eight hours for the best high-capacity batteries).

But this year we’ve seen manufacturers offering higher-capacity hybrids and have found two new Best Buys that last more than seven hours under our high-drain conditions, which simulate use in power-hungry devices such as shavers.

We’ve also tested the highest-capacity battery we’ve ever seen – the Ansmann Digital 2850mAh – and we were quite surprised at the results.

Which? rechargeable battery tests reflect real-life use, and we rate each battery based on the factors that Which? members told us were most important to them – including exactly how long each battery lasts each time it is charged, how well it keeps its charge when not is use, and how long it takes to charge.

The longest-lasting high-capacity batteries we tested survived nearly eight hours in our high-drain conditions, while the worst hybrids managed less than six hours.

Which? has tested two types of rechargeable battery – high-capacity and hybrid – and two types of disposables – pricey lithium and cheaper alkaline.

None of the rechargeable batteries we’ve tested last as long on a single charge as our Best Buy disposable batteries but you can use them repeatedly.

Hybrid rechargeables offer the added advantage of coming pre-charged – but don’t expect them to perform to their full capacity on their first use. In our latest tests the hybrids ranged from 27-75% charged from the packet.