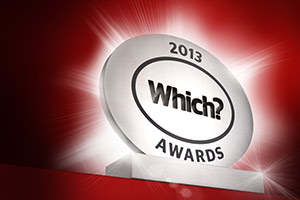 The Which? Awards 2013, which celebrates the UK’s best businesses, were presented earlier today in London.

This year, Aldi was named Best Supermarket for its impressive range of Best Buys, quality food and good pricing, while NFU Mutual scooped a Which? Award for the first time.

This year’s awards featured two new categories, one recognising excellence in customer care and a second in computing.

Samsung claimed victory in the Best Computing Brand category for its breadth of high performing models across the whole range. While Amazon, also a first time winner, won Best Customer Care for its great customer feedback and excellent service.

Feedback from Which? members saw the Hampstead & Highgate Heating & Plumbing Company, based in Enfield, claim Which? Local Business of the Year.

Earlier this week new research from Which? revealed that three quarters of consumers are now shopping around for the best deal more than they did before the start of the financial crises.

The research also showed that two thirds of the population are reading more reviews for products and services ahead of making a purchase and four in 10 are checking out independent advice from organisations like Which? when making a significant purchase.

Which? chief executive, Peter Vicary-Smith, said: ‘In these tough economic times it’s fantastic that there are companies who still go the extra mile for their customers to provide good quality service and value for money products. Being recognised by Which? is not just a mark of excellence, it can boost business.

Research shows approval from Which? can influence people’s purchasing decisions and a third of people who’ve seen one of our endorsements say it might even make them increase how much they are prepared to spend.’