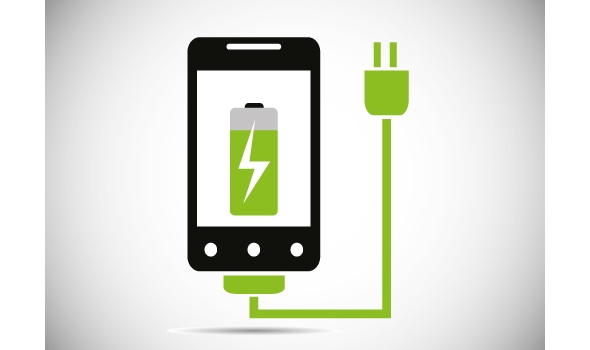 A recent BBC documentary, Fake Britain, highlighted the rise of counterfeit iPhones in the UK, but fake iPhone chargers are also on the increase and can be dangerous.

A genuine iPhone charger actually comprises two products – a power adapter for the wall, plus a ‘Lightning to USB’ cable to connect it to your phone – and can cost upwards of £30 from the official Apple Store. With that in mind, it’s no wonder some consumers are tempted to look elsewhere for a cheaper replacement, but if it’s not from Apple or a trusted third party, you could be putting yourself at risk.

Mobile phone Best Buys – the smartphones worth a second look

Fake chargers – what are the risks?

Late last year, the London Fire Brigade released a report warning of the dangers of counterfeit Apple iPhone chargers, explaining how fake chargers have the potential to put lives at risk. This followed an investigation where the LFB tested some widely available fake chargers to unveil any faults that could cause anything from damage to the charger or your phone, through to electrocution, burns or even house fires.

‘I was shocked at how potentially dangerous these chargers are. There have been some near misses in the last few months and, unless people stop buying them, it’s only a matter of time before we are called to a fatal fire.

‘For the sake of saving a few pounds is it worth putting the lives of your family at risk and taking the chance of potentially destroying your home?’

How to spot a fake charger

Genuine Apple iPhone chargers have more than 60 components in their circuitry while, on average, fake chargers have fewer than half that. But without opening up your charger to inspect it, how do you spot a dodgy and potentially dangerous device?

Here are a few key tell-tale signs to look out for before plugging your charger into the mains:

Safety mark – This should sit between the two bottom pins on the underside of the charger. The colour of the writing on the base of the plug may also be dark grey on counterfeits, while on real Apple products it will be light grey. Look out for even more obvious signs too – on one charger the London Fire Brigade tested the word ‘safety’ was misspelt! 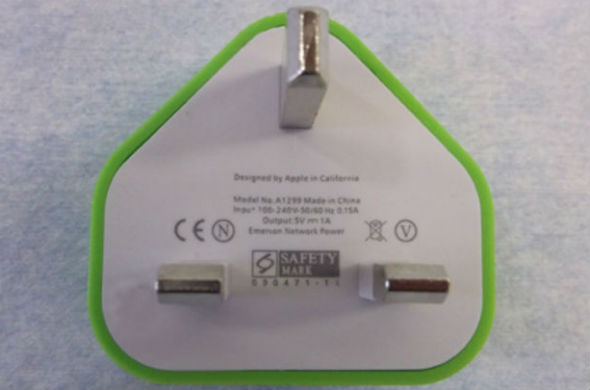 Weight – Genuine chargers tend to weigh more than their fake counterparts, due to the higher number of components. It won’t be easy to measure if you’re out and about, but if you have access to some scales, the wall adapter part of the charger should weigh at least 40g – in the LFB’s tests the real chargers always weighed more than this, while the fakes always weighed less. If you are out at the shops, that’s a little more than the weight of four pound coins.

USB socket – On dodgy chargers this may be upside down when compared to a genuine iPhone charger. Check which way the USB socket is positioned when the plug is on its back.

The finish – The pins on a real charger will have a matt finish, and be a consistent colour and finish as well as having a uniform square appearance like the one in the picture. Look out for a shiny or gloss finish, plus pins that are irregular in size, shape and angularity – poor external build quality is an obvious give-away. 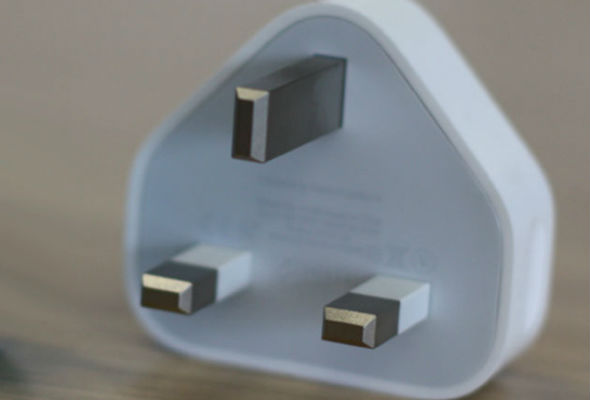 Use a reputable seller – In many cases these signs will only become apparent once you have the charger in your hands. This is a particular issue when buying online, as often there are only limited or poor quality pictures available. The best way to ensure you get the real deal is to buy from a reputable dealer – you may end up paying slightly more, but there won’t be a compromise in safety and it will be a small price to pay to avoid putting yourself or others in harm’s way.

So, is the below image of a real or a counterfeit charger? Let us know what you think in the comments below. 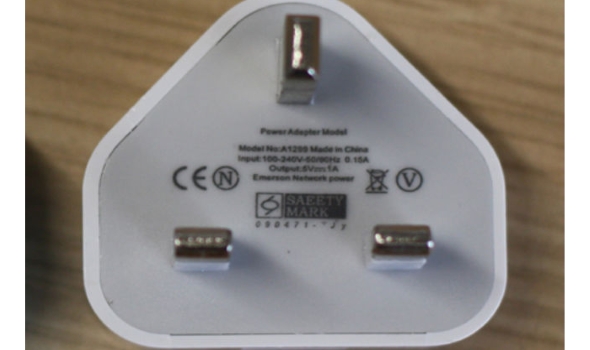