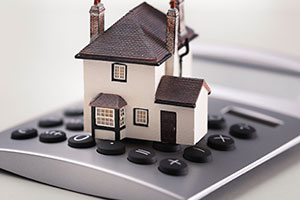 In Wales, 74% of homebuyers successfully negotiated a discount on the asking price

Three quarters of buyers initially offer below the asking price for their property, and two thirds are successful in purchasing their home for less than advertised.

In the 2015 Which? home-moving survey, we asked 1,990 members of the public who had bought a property in the last five years about their experiences.

With 73% of buyers initially offering under the asking price, it would seem we love grabbing a bargain – but not everyone felt able to haggle. Of the 33% of people who paid full price or above for their home, 28% thought about negotiating before deciding not to, and 40% didn’t even consider it.

The main reasons given for paying full price or above were the need for a quick purchase (29%) and competition from other buyers (25%).

Just 28% of our survey respondents paid the full asking price and only 5% paid in excess of it. However, the percentage of those who paid above the asking price varied significantly between cities, with 9% of Londoners paying a premium and just 1% of buyers in Leeds doing so. Homebuyers in Wales were the most successful at getting a cut-price deal, with 74% paying below the asking price. 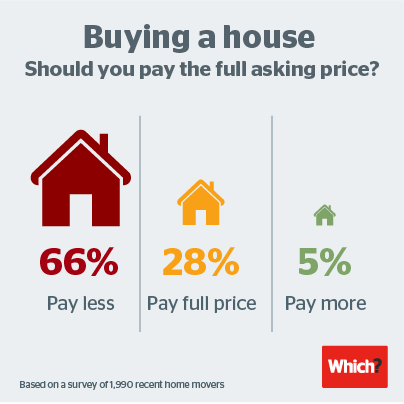 Making an offer on a property

Less than a third of people (32%) who paid the full asking price or above tried to negotiate a better deal. Overall, buyers in the Midlands (40%) were most likely to try to haggle on price and those in the north (29%) were least likely to.

Vendors could be open to lower offers for a variety of reasons. The property might have remained unsold for a while, it could need significant renovation work, or the seller may have a personal motive to complete a deal quickly.

Be careful, however, as buying and selling property can be an emotional business. While negotiating can be fruitful, by going in too low you could insult the seller and miss out on your ideal home.

Forging a positive relationship with estate agents can be useful in getting a purchase over the line, but be wary of sales tactics when making your offer. Nearly a fifth (19%) of buyers who paid over the asking price told us they did so because they were advised to offer more for their property, while 13% said they felt pressured into doing so.

By investigating the local market and viewing multiple properties, you can get a personal feel for how much the home is truly worth.

Buying a home in a competitive area

More than a third (37%) of people who paid above the asking price did so as they were bidding against other buyers, a common scenario when purchasing in an area where demand outstrips supply.

Sealed bids are becoming increasingly popular in thriving markets. This process involves a seller setting a guide price and a deadline by which all potential buyers must submit their offers in a sealed envelope. But while this might sound intimidating, sealed bids are not legally binding.

It’s not always the highest bid that wins, so be savvy and set yourself apart from the competition by emphasising the positives about your offer.  For example, if you are a chain-free first-time buyer, a cash buyer, or are prepared to be flexible on timings, your offer might be accepted even if you’re not the highest bidder.

If your desired property is in a sought-after location, there is also a risk that you might be gazumped. Gazumping happens when a seller agrees a deal with a buyer, then later on accepts a higher offer from somebody else, leaving the original buyer high and dry – sometimes several months into the process.

There are measures you can take to minimise the chances of being gazumped, such as making your offer subject to the property being taken off the market, or drawing up a contract which sets the exchange date within a set timeframe, thus shortening the window in which another offer can be made.