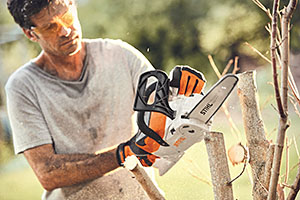 Stihl has released a new range of cordless tools aimed at home gardeners. The range includes a chainsaw, hedge trimmer, grass trimmer and leaf blower, all powered by 36V Lithium-ion batteries. All are said to be quiet enough to be used without ear defenders.

Almost half our members avoid going into their gardens when their neighbours are using a chainsaw (Noise in the Garden survey, Feb 16) and one in ten will complain. So if you want to stay on friendly terms, it’s a good idea to opt for a quieter cordless model instead of an ear-shattering petrol one.

Cordless garden tools have several advantages over corded electric and petrol versions. With corded electric tools you obviously have the problem of where to plug them in safely and the constant danger that you will cut through the cable. Petrol tools are not only noisy, but also heavy and can be very hard to start. To find out more about cordless tools, look at our guide to cordless grass trimmers.

We’ve taken a first look at the chainsaw, the MSA 120 C-BQ and fully tested the FSA 56 grass trimmer, .

The Stihl compact cordless chainsaw has a fairly small bar at just 30cm. It’s meant to smaller jobs around the garden, such as taking branches off smaller trees, clearing shrubs and cutting logs. We tried it out on logs for the wood-burner as Stihl claims it’s best for smaller logs. Find out whether how we got on when we tried it out on some fairly chunky logs.

We’ve reviewed two of Stihl’s cordless grass trimmers in the past, both aimed at high end and professional users who need to trim down large swathes of grass. The FSA 56 is less powerful, but that’s no bad thing for garden tasks such as edging the lawn and trimming round garden furniture. We also tried it out on long, dried grass to see how it coped with this demanding job.

We regularly ask members how they rate their garden tools and how reliable they are. Stihl is a popular brand with our members, despite that fact that most of their tools are aimed at professional users and have a comparatively high price tag. See what our members had to say about Stihl chainsaws, grass trimmers, hedge trimmers and leaf blowers.