Roaming charges may have been abolished in the EU, but what about further afield? We’ve looked at the cost to use your phone in some of the world’s most popular holiday destinations and discovered some astonishingly high charges.

You can now use your bundled data, texts and minutes anywhere in the EU at no extra charge, but in America, Australia and other popular international destinations, mobile phone providers are free to charge what they like.

We asked more than 3,000 people which countries they were planning on visiting over the coming year. Outside of Europe the top 10 most popular destinations were: the US, Australia, Canada, New Zealand, India, South Africa, Barbados, Vietnam, Thailand and Japan. We then looked at data and call costs in these countries from 15 UK mobile providers to see which were the most expensive.

Using data in countries such as India, Japan and Barbados could cost a massive £18.75 per MB with one provider, and just 10p with another. We also looked at call costs to discover that these can vary from £5 per minute to £1, or even less if you take advantage of the various add-ons offered by some providers.

Use the interactive map in our guide to Which mobile provider is best for holidays to find out how much you might be charged for data and call costs when roaming.

Which provider is cheapest for data?

When it comes to roaming outside of Europe, EE, Vodafone and O2 approach things differently to smaller providers, such as Giffgaff and Tesco Mobile.

Rather than charge a flat rate per MB and per minute of call time, EE, Vodafone and O2 offer add-ons to your normal package in selected countries. You can pay £5 a day to use your bundled minutes, data and texts on Vodafone while you’re travelling in each of our 10 favourite destinations apart from Vietnam.

EE gives you 500MB of data from £4 per day depending on where you’re travelling, and unlimited calls and texts for an additional £5 per day, but only covers 59 countries, including Europe, compared to Vodafone’s 110. O2 also covers 110 countries with its bolt-on deal, which offers 120 minutes and ‘unlimited’ data for £4.99 (though it will throttle your speed after 200MB). 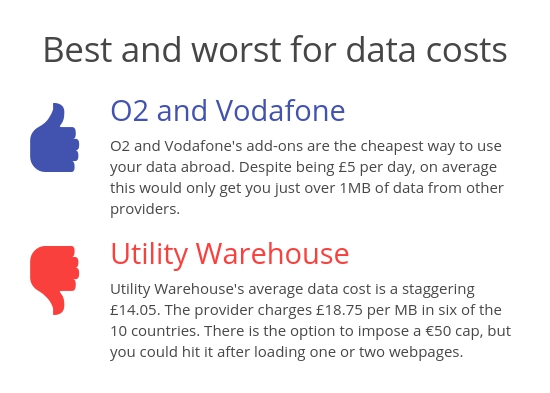 Three has a more confusing system of essential and advanced plans. If you have an advanced plan you can roam for free in more countries, including three of our top 10: the US, Australia and New Zealand. Travel to any of the other nine countries and you’ll be paying between £3 and £6 per MB. The cost difference between an advanced and essential plan can be as little as £2 per month, so if you’re making frequent trips down under or to the US then it’s certainly worth upgrading for the free roaming.

What about call time?

The cost to use your phone to make calls also varies wildly, with Sky Mobile able to charge 80p per minute to call the UK from Canada, while ID Mobile charges £5. 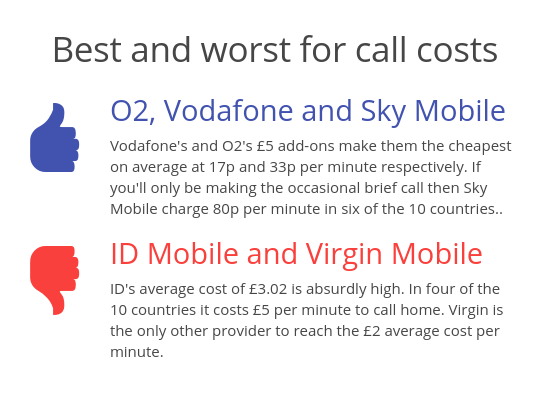 In general, destinations like Japan, Vietnam and Barbados are more expensive, but this still varies from between £5 per minute and £1 depending on your provider. Virgin Mobile and ID Mobile were the only providers to charge, on average, £2 or more per minute. O2 and Vodafone charge significantly less per minute, but you need to pay a set fee per day.

Which provider is cheapest?

Unless you’re only planning on using your phone in emergencies, Vodafone and O2 work out cheapest if you’re not covered by Three’s advanced plan. The add-ons look more expensive on paper, but O2’s £4.99 add-on is less than you’d pay for 1MB of data or a one minute call with some other providers.

As for those that don’t have add-ons, Talk Mobile works out cheapest when combining the average call cost per minute (39p) and data cost per MB (£1.48) across our 10 favourite destinations.

Our guide on Which mobile provider is best for holidays also reveals how much it could cost to receive a call and how your data is capped to help you avoid a huge bill.