Budget electronics brand Bush recently released a range of cut-price record players, including one model that harks back to the golden age of vinyl. We put it through our tough lab tests to find out whether it can compete with more expensive models.

The Bush Classic Retro Turntable with Legs takes its design cues from the famous Dansette record players of the 1950s and 1960s.

The player is available for £90 in Argos, putting it within the budget of many casual music fans. Nostalgia has been a key factor in the resurgent vinyl market, so a retro-styled player for such a reasonable price could be a hit.

The original Dansette was a classic British-designed record player, first sold in 1952. The iconic design featured built-in speakers (no hi-fis required), leatherette covering and wooden legs. More than one million were sold before the end of the 1960s, when they went out of production.

The Dansette was a sign of the vibrant pop culture of the time – teenagers with money to spend were suddenly able to listen to their favourite songs whenever they wanted. Today the classic players still sell for hundreds of pounds second-hand. Previous re-booted versions have sold on the high street for around £250, making the new Bush player look like it could be good value in comparison.

Like the original Dansette, the Bush player has built-in speakers behind a fabric-front grille and a faux-leather covering. Completing the retro look are the tapered wooden legs – a little reminiscent of a satellite from the space-race era. It will play records at all three common speeds: 33rpm, 45rpm and 78rpm.

In our testing we found it fairly easy to use – the record will start spinning automatically when you lift up the needle to put it on the disc. However, the number one thing this record player has to do to be worth buying is sound good. 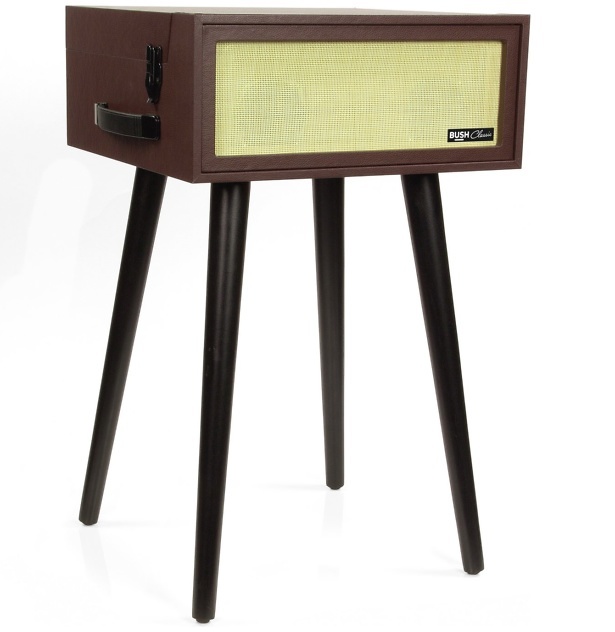 The best players we test will make your records sing, giving levels of clarity and detail that are hard to match. On the other hand, the worst will have you covering your ears to protect them from the harsh assault of noise. There’s simply no point collecting and listening to vinyl if it’s going to sound horrible.

Find out what our panel of expert listeners thought of it by reading our full review of the Bush Classic Retro Turntable with Legs.

Can you really get a good record player for £100?

It depends what your standards are but, in general, yes you can. Of course, you can spend almost anything on hi-fi products – the most discerning audio enthusiasts might tell you that you need to spend hundreds to get a turntable worth listening to, but this is relative.

Our tests have uncovered several good turntables you can get for around £100. These players will do your records justice, recreating fine detail in recordings and producing a pleasant, warm analogue sound.

Considering that these players beat some others that cost three times as much, it’s clearly not a foregone conclusion that a £100 player won’t be up to scratch. If you’re looking to join the vinyl revival but don’t fancy spending silly money, we’ve rounded up some of the best cheap record players from our testing.