After reaching its funding goal on crowdfunding website Indiegogo, the levitating Moon smart home system is one step closer to release. Its ability to hover is certainly unique, but do any of its other features stand out?

The unusual-looking gadget combines a security camera with features you’d find in a smart hub, but it looks like you’ll have to pay a hefty sum if you want one in your living room. Read on to find out more about whether this new smart home system from 1-Ring is worth the money. 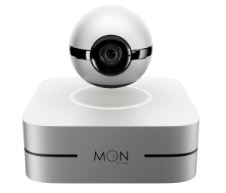 The first wireless security camera to defy gravity is on its way. It’s a plain-looking, spherical camera that floats above a base unit. As it’s not directly attached to any other object, it’s able to rotate freely and point in a certain direction if it detects a noise. It can then snap a picture and alert you to a problem via a handy smartphone notification.

Have we seen this before? No. The Moon’s floating design is undoubtedly its most unique feature, and it’s genuinely useful as it allows the camera to rotate a full 360-degrees.

Sensors to monitor your environment

This wireless security camera can shoot 1080p video, which should offer up a good amount of detail. It can work as a baby monitor or a pet monitor, and the sensors tucked inside it help measure temperature, humidity, light and CO2 levels.

Have we seen this before? Yes. The Canary All-In-One Security camera keeps an eye on air quality, temperature and humidity, which means it’s well suited as a baby monitor. And if you buy a smart hub, you can use that to control your heating. The Apple Homekit app (free with iOS 10 and 11) is compatible with smart thermostats including the Netatmo Thermostat.

As it has an IR blaster and Bluetooth inside, you can manually ‘point’ the Moon at other gadgets (using the Commander app) and use it as a remote control from anywhere in the world. It will play nicely with appliances, including air conditioning units and TVs, and you won’t have to worry about battery life as it’s continuously being charged wirelessly. When it arrives early next year, the Moon will work with smart systems including Amazon Alexa, Google Home, Samsung SmartThings and Philips Lighting.

The built-in Guard Mode can also offer up some peace of mind if you’re away from home. Activate it and the Moon will occasionally switch on lights and other devices to make it seem like somebody is inside.

Have we seen this before? Yes. Although the Amazon Echo Hub doesn’t come bundled with any other gadgets, you can use it to control lots of third-party devices, including Samsung SmartThings peripherals. It’s a similar story for the Swann SwannOne hub, which can be used to interact with various thermostats, smart plugs and lighting systems. 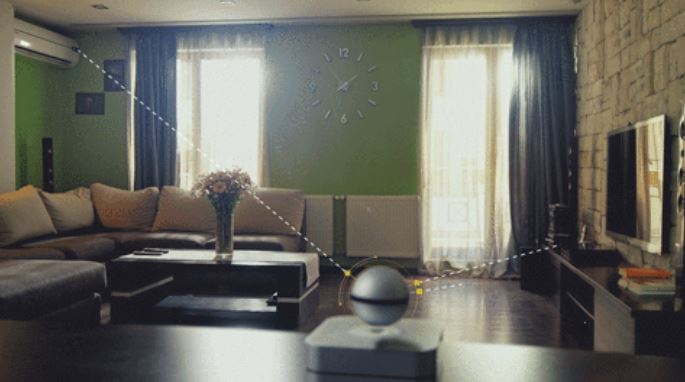 Unsurprisingly, the Moon’s extensive list of features mean the device comes at a cost. According to the Indiegogo page, the retail price for the camera (with base unit) is $330, or $250 without it, which means it wouldn’t levitate. So you could be paying at least £200 for a non-floating Moon.

Considering the Moon will cost you over £200, you may be tempted by some cheaper alternatives.

If you’re not interested in a wireless camera, we’ve put plenty of affordable smart hubs through their paces in our test lab, including the Amazon Echo Dot and Google Home (below).

The Amazon Echo Dot is a £50 voice assistant, powered by Alexa. Once you’ve set it up, you can use the small gadget to manage your schedule, run web searches or interact with other internet-enabled smart devices in your home. To see what our experts make of the Dot, see our full Amazon Echo Dot review.

If you’ve got a slightly bigger budget, the Google Home is an option. It makes use of Google’s voice-activated helper, Google Assistant. As is the case with the Amazon Echo Dot, you can ask it questions and control other smart tech. The list of compatible devices includes the Google Chromecast, Philips Hue light bulbs and Honeywell thermostat. To see if this smart hub is a proven Best Buy, head over to our Google Home review.

If you’re just looking for a wireless camera, our tests show you don’t always have to spend big to land yourself a Which? recommended model. In fact, one of our proven Best Buys will cost you less than £100 and is capable of recording video in Full HD and uploading that to a Micro-SD card or to the cloud.

But not every security camera we’ve tested has passed with flying colours. One of our Don’t Buy models is let down by poor video quality and little-to-no privacy or security settings.