A Which? Travel investigation has revealed that misleading ‘hurry deals’ could be duping travellers into paying hundreds of pounds over the odds for holidays.

The time-limited promotions – advertised in national newspapers and circulated by email – promise consumers bargain prices if they book their package holiday or cruise before the cut-off date.

However, when we tracked the deals over three weeks in July and August 2017, we found that in 16 out of 30 cases the price was the same – or even cheaper – after the sale had ended.

Many of the ads urge travellers to ‘hurry, book now’ and use online tactics, such as ticking countdown clocks, to create a sense of panic in the buyer.

Popular holiday companies could be in breach of the Consumer Protection from Unfair Trading Regulations (CPRs) if a retailer’s actions can be shown to be misleading, and likely to cause the average person to rush into a buying decision they wouldn’t otherwise have taken.

Luxury resort chain Sandals was offering a seven-night all-inclusive break to Jamaica for £1,465 per person in its Summer Mega Sale. ‘Save up to 60%… Hurry! Only one day left,’ the strapline read. 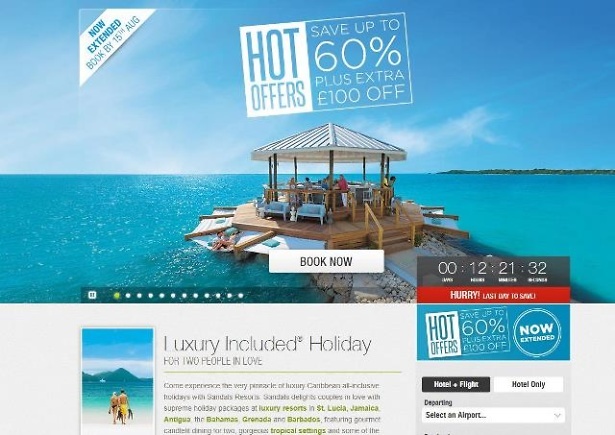 However the day after the ‘sale’ ended, the price dropped by £50 per person – and continued to run for another week – so no need to hurry after all.

The travel company seemingly runs 60%-off promotions back-to-back under various guises, adding another seven days to the countdown clock.

A spokesperson for Unique Caribbean Holidays Ltd, the UK tour operator for Sandals, told us the company does not intentionally pressure sell or create false book-by dates, and that all its packages are fairly promoted to the customer.

It added:  ‘We clearly state our sale terms and conditions on our website, which do not breech any advertising guidelines, and in turn do not mislead our customers.’

A week later the package crept up to £682 per person, but was still considerably cheaper than the ‘sale’ price.

A Virgin Holidays’ spokesperson told us that it would never intentionally advertise anything misleading. It added: ‘We are always looking to secure the best possible value for our customers – and should we be able to obtain better offers from our suppliers, these savings will be passed on to benefit the customer.’

Other questionable deals included a lastminute.com stay at a Paris hotel with flights. The day after the promotion ended, the price dropped from £139 to £126 – and this lower rate was still available a week later.

Other deals saw prices yo-yo. Two-nights at another Paris hotel was £404 in Expedia’s ‘flash sale’. After the promotion ended, the break went up to £628 – only to drop again a fortnight later when a new 40% off promotion ran. This time the same stay was available for £382 – £22 cheaper than the original ‘sale’ price.

Extended sales were also common. We found Inghams Italy offering discounted trips to Capri, Milan and Puglia until 4 August. But the expiry date was pushed back twice, meaning the same prices were still being advertised a month later.

A Kuoni ‘special offer’ also continued to run after the deadline, meaning an all-inclusive holiday to Jamaica dropped by £200 per person the day after its initial sale ended.

Kuoni and Inghams said they have reviewed how they promote offers as a result of our findings, which we have shared with Trading Standards and the Advertising Standards Authority.

16 ways to save money on your household bills this winter