Almost 1,500 ATMs disappeared from the UK in just five months, a Which? Money investigation has found.

Cash machines closed at the unprecedented rate of around 300 a month between November 2017 and April 2018, amounting to a 2% shrinkage of the entire UK network.

Which? Money analysed exclusive data from Link – the UK’s largest ATM network – and compared the number of live machines at two different snapshots in time.

Below, we explore why cash points are vanishing and how communities could be affected.

Remote communities were hit worse by the closures than urban areas. The rural network shrunk by 2.1% compared with 2% in towns and cities.

This may not seem significant, but people in the countryside were already less likely to have easy access to cash. What’s more, it runs counter to Link’s claims that any closures will target urban locations and that it will do ‘whatever it takes’ to protect cash provision in isolated parts of the country.

The worst affected communities in the UK were found in rural parts of Scotland, where 40 cashpoints disappeared in five months – amounting to 2.9% of the entire network.

You can use the map below to explore where ATMs are currently distributed, including the distance to the nearest one.

Cash may no longer be king, but it isn’t dying either. It is still the second most commonly used method of payment in the UK, behind debit card payments.

One such person is Barbara Pointon, 78, who lives in the Cambridgeshire village of Thriplow.

The retired lecturer told us she uses noted and coins for everything from non-prescription medicines to groceries.

‘I couldn’t live without it,’ she said, adding that her village shop only accepts card payments for purchases of more than £5.

At the moment, she makes a weekly drive to the nearest cashpoints, located five miles away in Great Shelford. If these disappear, she’ll be left facing a 14-mile round trip to the next ATM in Cambridge.

Earlier this year, the severe spell of cold and damp weather prevented Barbara from driving for several weeks, during which time she was unable to pay her cleaner.

‘Thankfully, she didn’t mind waiting,’ Barbara said. ‘But if it had been a new person, they might have walked out.’

Use the interactive table below to discover how cash machine provision changed in your local authority between November 2017 and April 2018. (source:Link)

Why the cash machine network is shrinking

After peaking at around 70,500 machines across the UK in 2015, ATM numbers then declined a rate of around 50 a month.

This is partly a consequence of banks shutting down. Almost 3,000 UK branches closed (or will close) between 2015 and 2018, a separate Which? Money investigation recently revealed.

The unremitting rise in electronic payments is also a key reason for the decline in ATM provision. In 2017, debit card payment overtook cash for the first time, according to UK Finance.

But none of this explains the sharp acceleration in cashpoint closures we uncovered in the five months to April. ATM operators have said that this is directly related to a change in the way that free-to-use cash machines are funded.

What is the ATM interchange fee?

This fee – known as the interchange – is currently set at around 25p. So, if you use your HSBC card to get cash out from a Santander machine, HSBC pays Santander the 25p interchange rate. 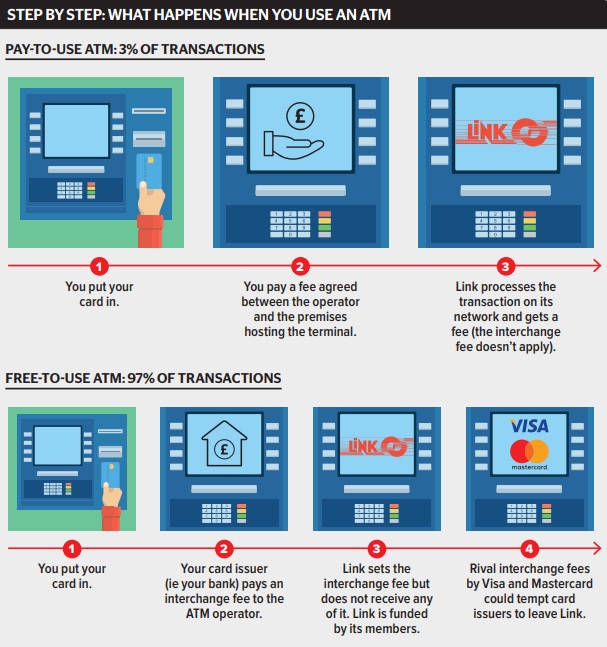 However, on 1 July the interchange will be cut by around 1p – the first of four annual changes that will result in a 20% reduction overall.

Independent ATM providers told us that the anticipated of hit to their revenues has forced them to drastically reduce their estates.

One of the largest, NoteMachine, told us it had learnt in late 2017 of Link’s decision to cut the interchange rate, adding: ‘It had an immediate effect on our ability to maintain widespread free access.’

Our findings support these claims. However, Link strongly disagrees with this interpretation.

Link points to the fact that the cash machine levels have been steadily falling, while emphasising a package of measures it is introducing alongside the interchange cut, which it hopes will bolster ATM provision in rural areas.

These include its Financial Inclusion Programme, which promises premiums of up to 30p extra per transaction to support ‘at risk’ machines, along with a guarantee that all free ATMs currently more than one km from the next will be exempt from these funding cuts.

Time will tell whether these measures are sufficient to maintain a properly functioning ATM network. The ATM industry association, which represents all cash machine operators, has warned that the UK could lose as many as 25,000 to 30,000 ATMs by 2030 if the interchange rate is cut by the full 20%.

Harry Rose, Which? Money Editor, said: ‘With hundreds of cashpoints closing every month we have serious concerns that, far from protecting consumers’ access to cash, LINK’s plans risk destroying it.

‘These cuts could see millions of people who rely on cash in their daily lives struggling through these closures – with severe consequences for many communities and businesses.’

Which? and the Federation of Small Businesses have launched a campaign to ‘Save Our Cashpoints,’ calling on the Payment Systems Regulator to conduct an urgent review to fully evaluate the impact that these changes could have on communities and consumers’ ability to use cash payments.

If you’re worried about cashpoint provision in your area or across the UK, please sign our petition.