Up to 5% of the UK’s population – more than a million homes – could be using routers that are several generations old, according to Which? research.

This means that millions of customers could be missing out on faster and more reliable wi-fi speeds, better security and more features.

However, in our recent survey of more than 8,000 Which? members, four in five respondents claimed that they had received an upgraded router from their internet service provider (ISP) for free, just by asking.

Published in the October issue of Which? Magazine, our survey asked members how long they had been with their ISP, whether they’d ever replaced their router and if they recall being charged for the cost of a replacement or upgraded router during their time with their provider. 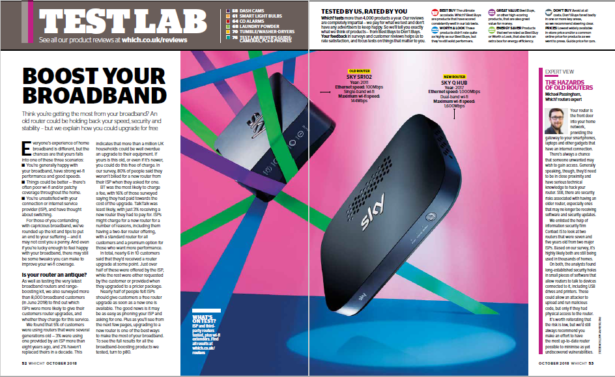 It found that 80% of respondents who had received a replacement or upgraded router from their ISP were not charged for the upgrade (8% couldn’t remember, with a further 12% saying they had paid), meaning the very best kit could just be a phone call away.

Find out who impressed and who flattered to deceive in our survey of best and worst broadband providers for 2018.

Which ISPs are most likely to upgrade your router for free?

This is particularly notable, as a massive 96% of respondents who are BT customers use a router supplied by the company and haven’t replaced it with a third-party offering bought from a retailer. Of those with Virgin Media, 10% said they were charged for a new router, while a fifth of those with Utility Warehouse customers paid. 16% of both Sky and Plusnet customers said they’d been charged for a router during their tenure with the ISPs.

Why should you upgrade your router?

Security can be one concern with older routers.

We enlisted the help of information security firm Context IS to look at two routers that were five and seven years old from two major ISPs. Based on our survey, it’s highly likely both routers are still being used in thousands of homes. On both models, the analysts found long-established security holes in small pieces of software that allow routers to talk to devices connected to it, including USB drives and printers. These could allow an attacker to upload and run malicious code, but only if they had physical access.

Ultimately, the risk is low, but your router is the front door to your home network, providing the gateway to your smartphones, laptops and other gadgets with an internet connection. There’s always a chance that someone unwanted may wish to gain access, and we’d still always recommend you make an effort to have the most up-to-date router possible to minimise as-yet undiscovered vulnerabilities.

You’re also likely to benefit from better performance. And, as you can see below, the claimed speed and features of ISP routers can change substantially in just a few years. 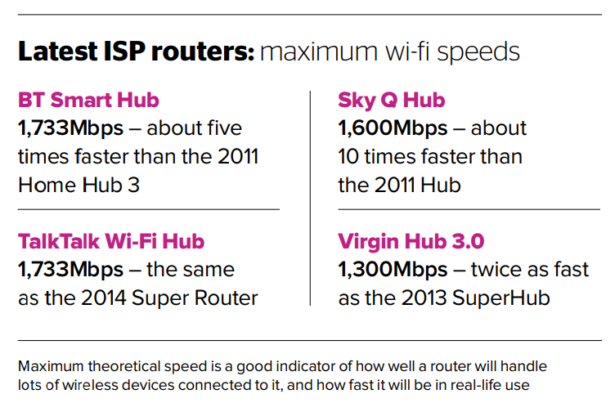 Find out how the latest ISP routers, including the most recent models from the biggest providers, scored in our test labs.

What if I have bad broadband?

If you’re having problems with your connection there are a number of possible faults. It’s always worth running through the following steps before you resort to calling your ISP.

Need more help? Read our multi-page guide to help fix and speed up your broadband.