We’ve discovered another two carbon monoxide alarms that have failed our CO detection tests. These are in addition to the dangerous CO alarms we told you about in June – these were being sold on Amazon and Ebay, and the two companies had them removed from sale as a result of our tests.

The X-Sense CO03D and Aico Ei208 carbon monoxide alarms join the Topolek GEHS007AW and unbranded alarms in failing to pass some of our British Standard CO detection tests.

Having an effective alarm can mean the difference between life and death. As these models failed some of our testing, they could pose a threat to the safety of your loved ones. Which is why we’ve made them Don’t Buy CO alarms.

Find out how you can identify these alarms, why you should be telling family and friends about them, and how to test your CO alarm to keep yourself safe.

Want to know which alarms you should avoid? See all our Don’t Buy CO alarms.

Use our gallery, below, to check whether you’ve got a Don’t Buy alarm installed in your home.

The X-Sense CO03D and the Aico Ei208 carbon monoxide alarms have both been made Don’t Buys.

They join the three unbranded alarms and the Topolek GEHS007AW CO alarm that we flagged in June – see the lethal carbon monoxide alarms we found on Amazon and Ebay.

You should avoid buying these alarms at all costs. If you already have one, don’t use it and swap it for a Best Buy alarm instead.

How we test carbon monoxide alarms

You can trust our testing because we run the same tests that are used for the British Standards (BS EN 50291-1:2010 + A1:2012). There are 33 different CO tests that are carried out at our lab to show whether an alarm responds to the presence of CO in the atmosphere.

Best Buys need to pass every one of our 33 CO tests. If an alarm fails even one of the 33 tests, we will make it a Don’t Buy. We see how well the alarms recover after triggering to assess whether they continue to detect CO, and we also check how well they respond three months after initially being tested.

Find out more about how we test carbon monoxide detectors.

We contacted manufacturers Aico and X-Sense about the alarms that failed in our tests.

Aico told us that it’s concerned, and that it takes all matters of alarm quality and reliability very seriously. It said that all of its alarms are independently tested, it hasn’t had a problem with these alarms since they were launched in 2010 and that it’s confident its alarms meet the carbon monoxide alarms standard.

X-Sense has not yet responded.

Look out for unbranded CO alarms

The unbranded CO alarms that have failed our testing were bought online from Amazon and Ebay. While we believe them to be exactly the same model, they come in slightly different packaging.

Following the results of our tests, Amazon and Ebay removed the unbranded alarms from sale and went on to de-list another 50 lookalike alarms that we believe to be identical and equally as dangerous as those that failed our tests.

Below are pictures of the packaging the unbranded alarms came in. If you’ve bought one of these alarms, replace it with a Best Buy model. 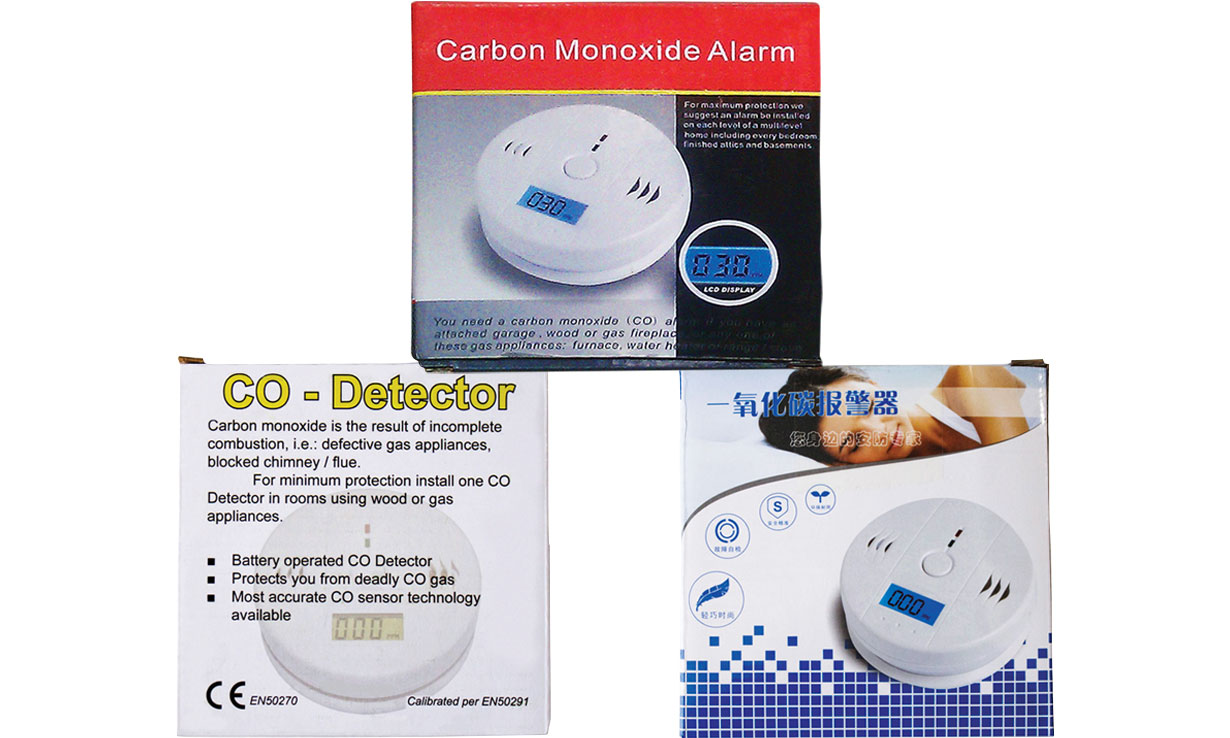 Watch the video below for more information on the unbranded Don’t Buy alarms and how they failed testing, then share the video or this story to help protect your loved ones.

The good news is that we’ve also discovered great Best Buy CO alarms, which have passed all 33 of the CO detection tests that we put them through.

Staying CO-safe is as simple as picking a Best Buy alarm and setting it up in the correct location in your home (according to the manufacturer’s instructions). As our Best Buys start at £20, it’s a small price to pay for safety and peace of mind.

We’d encourage you to share the message about the importance of picking a good quality CO alarm with friends, family and (if you’re a heating engineer) customers. In fact, we’re working together with Which? Trusted Trader heating engineers to give away 1,000 free CO alarms.

Each time one of our selected Trusted Traders services or installs a boiler in the home of a customer who doesn’t yet have a CO alarm, they will give them one of our Best Buy alarms for free.

Read more about the Which? carbon monoxide alarm giveaway.

How to test your CO alarm

You should test your alarm monthly by pressing the test button. This is the method recommended by the Council of Gas Detection and Environmental Monitoring (COGDEM).

It confirmed that all alarms that have passed the safety standard must automatically self-test their sensor and battery, and report faults by sounding. But by pressing the test button, you’re causing this sensor test to happen on demand, as well as testing the circuitry, software, battery, LEDs and sounder.

Get more information on how to install and test your carbon monoxide alarm.