A TV is a window into another world. One day you can follow detectives solving heinous crimes, the next you’re watching snow leopards peek their heads out from behind a rock. But when a TV’s turned off it becomes, for many, an unwanted feature that can dominate a living room.

The Frame TV is Samsung’s solution: a TV that becomes a work of art when it’s switched off.

TVs are getting bigger. Market leaders Samsung, LG, Panasonic and Sony are all focusing on larger sets. We’ve reviewed 162 TVs so far this year and 55-inch sets outnumber 32-inchers six to one. Falling costs and more 4K content has increased demand for larger TVs, but many people don’t want a TV to be the most attention-grabbing feature of their living room.

Samsung’s solution is novel but very expensive, and a version of the art-displaying technology in the Frame TV is also featured in its top-of-the-range and much cheaper QLED sets. So why pay more for the Frame?

More than a TV

The Frame isn’t just a typical-looking TV that shows a Picasso when it’s turned off; it’s designed to look like something that wouldn’t look out of place hanging in the Tate.

Generally, manufacturers want their TVs to be as thin as possible, but the Frame is a thick, symmetrical rectangle – just like a real picture frame. The bezel, which is the most frame-like part of the TV, is interchangeable. You can choose from a black or white bezel and there are options that look like light and dark wood. These are fitted with magnets and can be changed at home, so there’s no need to take your TV to a picture framer. 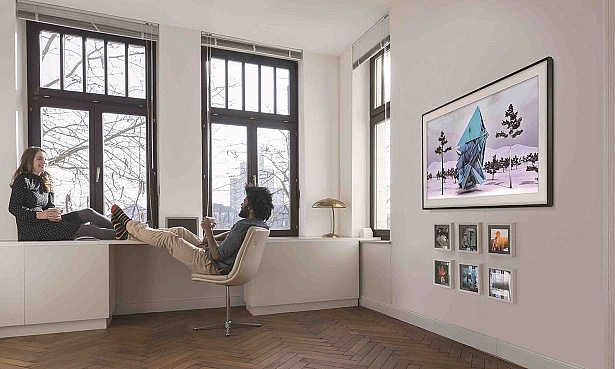 All the effort of camouflaging a TV to look like a work of art would be wasted if there wasn’t a way to also hide the cables. The Frame is still a TV, so it needs to accommodate Blu-ray players, sound bars, games consoles and more, but you don’t need to connect any of these devices to the TV itself. Instead they go into a separate box that’s connected to the TV by one thin, almost transparent cable.

The final piece of the puzzle to complete the transformation from TV to picture frame is the wall mount. Samsung created one that leaves no gap between the TV and the wall, so when it’s hanging you only see the frame rather than a bulky metal mount behind it.

Galleries in your home

Paying £3.99 a month gives you access to some of the most famous paintings and photographs in the world, from old masters to contemporary artists and more in between. Samsung has partnered with several top galleries, including the Tate Modern and the V&A, to create curated collections to display on screen.

You can search the huge selection by painter, gallery and even colour, so you can pick a painting that suits your decor.

The TV can display your own masterpieces, too, whether you’re a budding artist or you just want to see some family photos blown up on your wall.

QLEDs do it too

The Frame TVs aren’t the only Samsung TVs capable of displaying works of art, though, as the 2018 QLED TVs do, too. The difference is that you don’t have access to the curated collections. They can display photos, so if you had some art saved on your phone or a USB stick then the TV could display it.

You would, however, need to start mucking around with aspect ratios to make sure the edges of the painting weren’t chopped off. The image would need to be the exact right size, too, or it would be stretched to fit the screen and appear blurry.

The Frame TVs also have a sensor that reacts to ambient light, ensuring that the art being displayed doesn’t look artificially bright.

But is it a good TV?

Despite the high price, the Frame TVs aren’t QLEDs. Samsung’s top-of-the-line TVs use backlights, as with LCD TVs, but they illuminate quantum dots rather than liquid crystals, which is said to improve colour accuracy, which is something that would be handy when displaying famous works of art.

For the huge price, the Frame TVs should really include Samsung’s best TV technology. That’s not to say the picture quality will be bad: some of Samsung’s LCD TVs have done well in our tests, but if the focus of the Frame is on still images at the expense of moving pictures then it would struggle to match the best TVs we’ve tested.