From rusty sunloungers to dingy hot tubs, a report by Which? Travel shows what happens when hotels and travel agents over-promise and under-deliver.

The photos below, taken by disgruntled guests, reveal the reality behind some of the idyllic hotels advertised online.

Travellers were left outraged after paying thousands of pounds for hotels that fell woefully short of what they were promised. These included five-star accommodation with a building site outside, and a hotel pictured and advertised as ‘on the beach’ that was anything but.

From honest hotel reviews to advice on finding the best price for your holiday, subscribe to Which? Travel.

Francesca Brown couldn’t wait for a soak in her Hoseasons ‘VIP’ cottage hot tub on the Isle of Wight.

She’d booked the property on the strength of the website’s promotional photos, which showed a clapboard house and pretty garden.

So she was shocked to find a mound of gravel surrounded by overgrown weeds, tree roots and discarded cigarette butts.

Video: The reality behind the glossy hotel images online

‘It looked more like a prison yard than a premium cottage,’ Ms Brown told us, after arranging the long weekend for her 40th birthday celebration.

She sought compensation and secured an £86 payout from the company, which was equal to 15% of the cost of the holiday.

In response, Hoseasons told us: ‘The images of the site are representative of the customer experience, although in some cases we recognise there are variations in the outdoor space. We are reviewing the current pictures to ensure they give a clear overview of the site and will be removing any we believe don’t meet our guidelines.’

Find out who you can trust with your holiday booking with our best and worst travel agents.

Tui good to be true

Robert Thompson booked a Tui holiday to the Hotel Castello di Rodi in Rhodes after being seduced by images of the rooftop pool online.

But instead of aquamarine waters fringed by exotic flowers, he found overgrown trees, cracked tiles and sunloungers so corroded that they were ready for the scrap heap.

Inside was no better. The lobby’s brown leather armchairs, which had looked so classy online, were haemorrhaging their stuffing.

‘The whole place was tatty, tired and dingy,’ he said. ‘I couldn’t believe it when the door handle to the balcony fell off in my hand. It was almost farcical.’

Mr Thompson was awarded a £500 voucher in compensation after a lengthy complaints process via Abta (the Association of British Travel Agents).

A spokesperson for Tui told us that it was reviewing its online content for the Hotel Castello di Rodi, adding that it ‘takes all customer feedback seriously’.

Mr Heath was expecting luxury when he booked the five-star Movenpick on Dubai’s exclusive Jumeirah Beach.

But when he headed for his sunlounger, instead of swaying palm trees he found a ‘crane swinging right over the pool’.

He booked through Travel Republic, which rejected his compensation claim. A spokesperson told us it had been upfront about ‘enhancement works at the hotel’ during the booking process.

Mr Heath says he didn’t see this warning. Our subsequent checks found it in the small print at the bottom of the payment page. 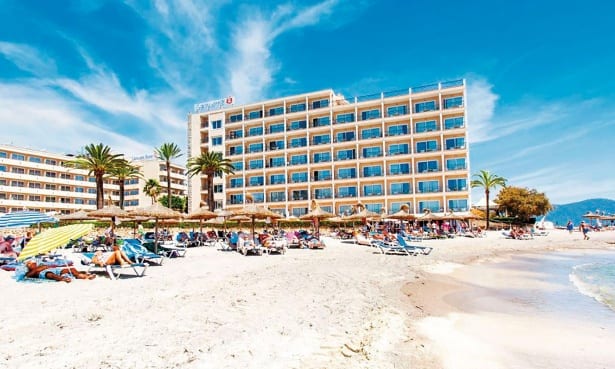 On arrival, Linda Allsop’s hotel in Mallorca looked just like its photos – spilling on to golden sands, just steps from the ocean. So she couldn’t believe it when the porter carried her luggage to the hotel across the road instead.

Holiday Hypermarket’s website (part of the Tui group) described her property as ‘on a beach’ and showed photos of the Hotel Levante. However, she was in fact booked into its sister property, Levante Park – with a strip of tarmac between her and the beachfront.

‘Surely that’s false advertising,’ she said. ‘I was in sheer disbelief that I wasn’t staying in the hotel pictured!’

Several Tripadvisor reviews prove that Linda isn’t the first guest to feel duped in this way.

Tui refunded Linda and her partner £50 each and the online description was changed to ‘two-minute walk to a beach’. But when we checked, photos of the beachfront hotel were still being used for promotion.

The hotel’s marketing potentially breaks regulation 5 of consumer protection law: a misleading action, which could cause the average consumer to make a transactional decision they wouldn’t have otherwise made. We have contacted the Advertising Standards Agency, and if a complaint is upheld the operator will have no choice but to change its marketing. 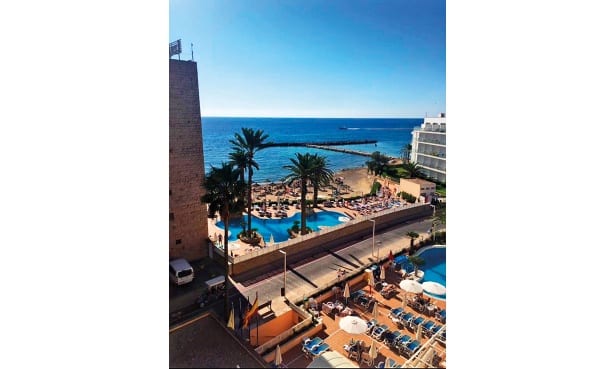 How to spot a fake

As these nightmare scenarios prove, appearances can be deceiving. Some hotels will use photographic techniques – including a fish-eye lens, clever filters or Photoshop – to make a property look better than it is.

Others might use images that are years old and neglect to show the wear and tear on rooms and facilities.

Always check real photos from guests on Tripadvisor, Booking.com and other websites – ignoring those uploaded by the hotels themselves. If you still get caught out, follow our advice on your rights to a refund if your hotel is not as promised.