Planning to barbecue a sausage this weekend? Don’t assume that the most expensive ones contain the most meat.

We’ve investigated how much pork is in 41 widely available sausages, including those from Tesco, Sainsbury’s, Aldi, Heck and Richmond, and found the amount of pork varied from 97% to 42% and price wasn’t always a reliable guide to porkiness.

That’s nearly half the price of The Good Little Company Great Big sausages which contain 87% pork and cost £3.15 per pack (6 sausages) or £8.75 per kg.

The cheapest ones we found were Lidl Simply Pork sausages which cost £1.60 per kg and contain 53% pork.

But these weren’t the ones with the lowest meat content. Richmond is one of the biggest names in the market but its thick pork sausages contain just 42% pork – the least they can legally contain to be labelled pork sausages.

Despite containing so little pork they cost almost three times more than the Lidl sausages at £4.41 per kg 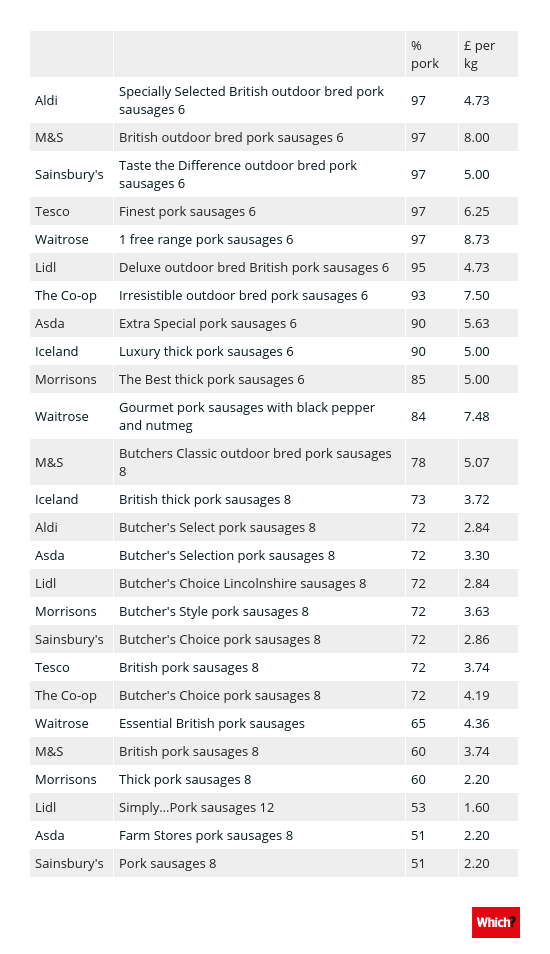 While pork is pricier than sausage fillers, such as rusk, more pork doesn’t always mean a tastier sausage, as Russell Aqeel, butcher from The Ginger Pig, explains:

‘Those containing rusk hold their form better and the rusk absorbs pork fats and juices released during cooking. The fat can drip out of higher 97% pork sausages leaving them feeling dry’.

For the best barbecue banger, Russell advises going for a sausage that contains at least 75% pork. 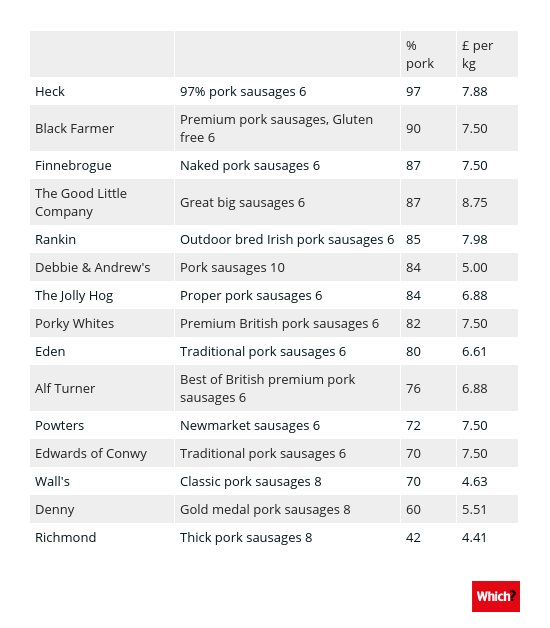 Where is your pork sausage from?

All sausages we investigated were made from British pork, apart from Richmond and Wall’s which contained meat from the UK and EU.

There’s no legal definition for free-range pork in the way there is for chicken but it’s accepted as pigs born and reared in outdoor systems with permanent access to pasture. If this is important to you we only found one free range product, those from the premium Waitrose 1 range.

The premium ranges from Aldi, Lidl, M&S and The Co-op and standard ranges from M&S and Waitrose all signpost that they’re made from outdoor bred pork where pigs are born outdoors but are brought indoors for growing after weaning. As are those from Rankin, The Good Little Company and Jolly Hog.

To make sure you get the most out of your sausages this summer, we asked chef James Adams to share some tips for cooking on the BBQ: