Roberts is renowned for its attractive retro-styled radios, and it claims to be the UK leader in portable radios. But our past few years of testing tell a different story.

Its radios have had a pretty mediocre run, with overall test scores averaging a stagnant 54-56% in each of the past three years.

Meanwhile, Pure’s radio scores and the quality of its products are creeping up, coming in at around 5% higher than Roberts radios. But the real star of the show is VQ, with average scores more than 10% higher in the two years to date. So should you switch to VQ for better sound quality?

Unfortunately, averages don’t provide the complete picture. We’ve found outstanding Best Buy radios from Roberts, Pure and VQ, but also models that don’t quite hit the mark. Our impartial reviews sort the good from the bad to save you from spending your money on a dud.

Jump straight to the good stuff and visit our best radios page.

Which radio brands got the highest score?

VQ has had an outstanding record in our testing over the past two years, producing some of the best-sounding radios our lab has seen recently. But you still need to choose wisely – one VQ radio we tested was so bad we made it a Don’t Buy, and we’ve given a fair few mediocre scores as well.

Pure’s radios have achieved a respectable average of around 60% over the past three years, despite releasing more radios than any other brand, and scores have slightly improved year on year. Pure has now opened up a clear lead over Roberts, which, despite producing some excellent models, has also released a lot of middling radios that aren’t a match for the competition.

The graph below charts the performance of these three top radio brands over the past three years to date. We test all radios for their sound quality, ease of use and features. 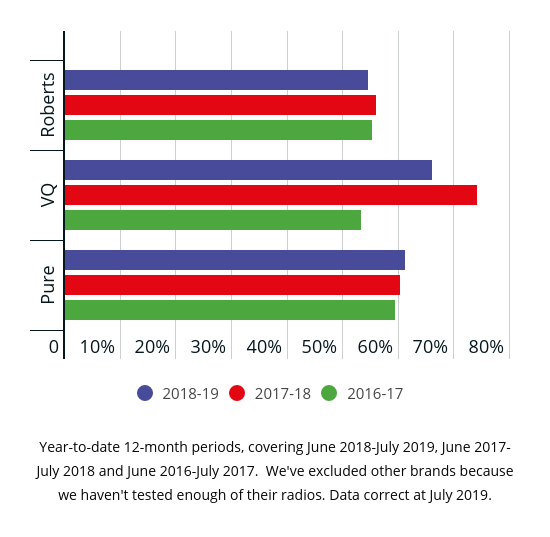 We didn’t test radios from any other brand across all three of these year-to-date time periods, so we haven’t included them. This means we’ve excluded the other leading radio manufacturer, John Lewis – to find out if its models are worth considering, see our John Lewis radio reviews.

So what radios does VQ offer?

The quality of VQ’s radios is away ahead of the competition, despite them costing the same or little more at launch than those from Roberts and Pure. It makes a range of radios, from small alarm clock and portable radios, to larger models and even a top-of-the-range internet radio that aims for hi-fi-like sound quality.

Many of its radios have trendy retro styling, which has proved to be very popular with buyers in recent years. These retro VQ radios rival the timeless 1950s styling of the Roberts Revival range.

See some of the most recent models in VQ’s radios range below. Then check the reviews to find out whether they’re worth your money, or disappointing models to avoid. 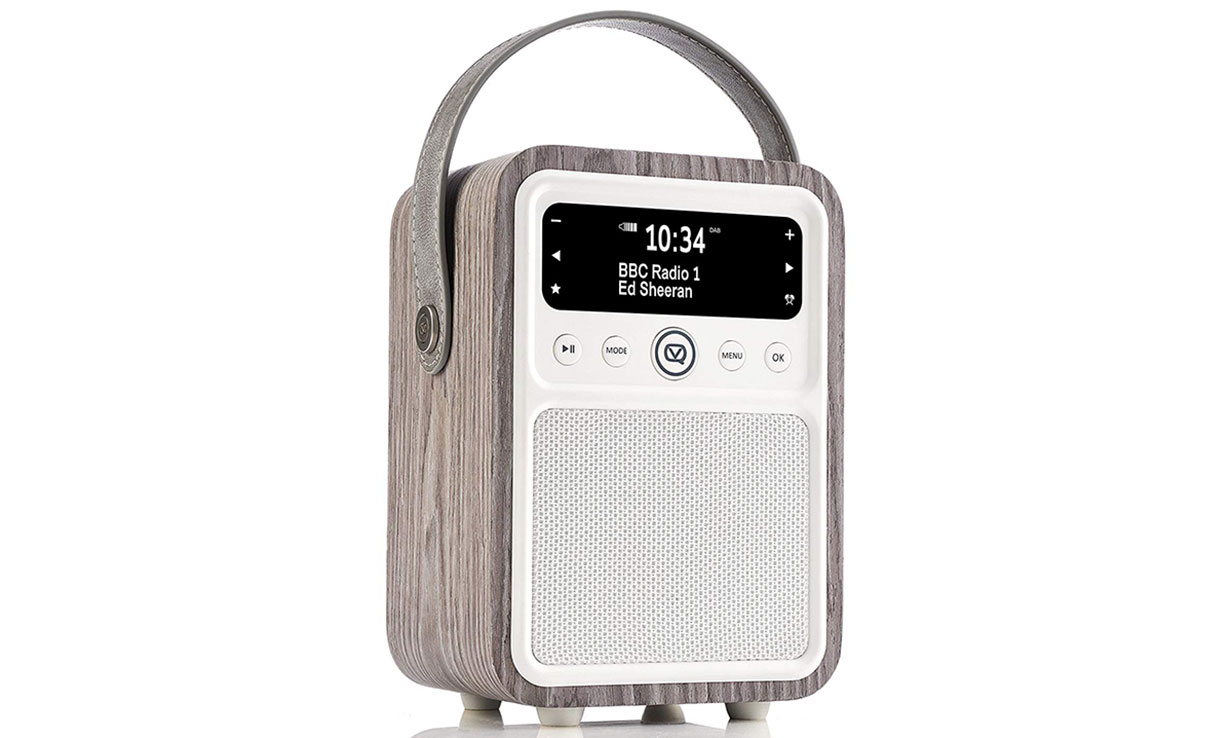 The VQ Monty is a compact tabletop DAB+/FM radio with a handy carry handle. There’s an alarm and snooze function if you want to use it as a bedside radio, and Bluetooth allows you to stream music and access internet features via your smartphone.

Its wooden finish gives it a premium look over plasticky rivals, and VQ promises its sound quality offers ‘warmth and richness of tone’ like listening to vinyl records.

Find out whether this is the ideal radio for you in our VQ Monty review. 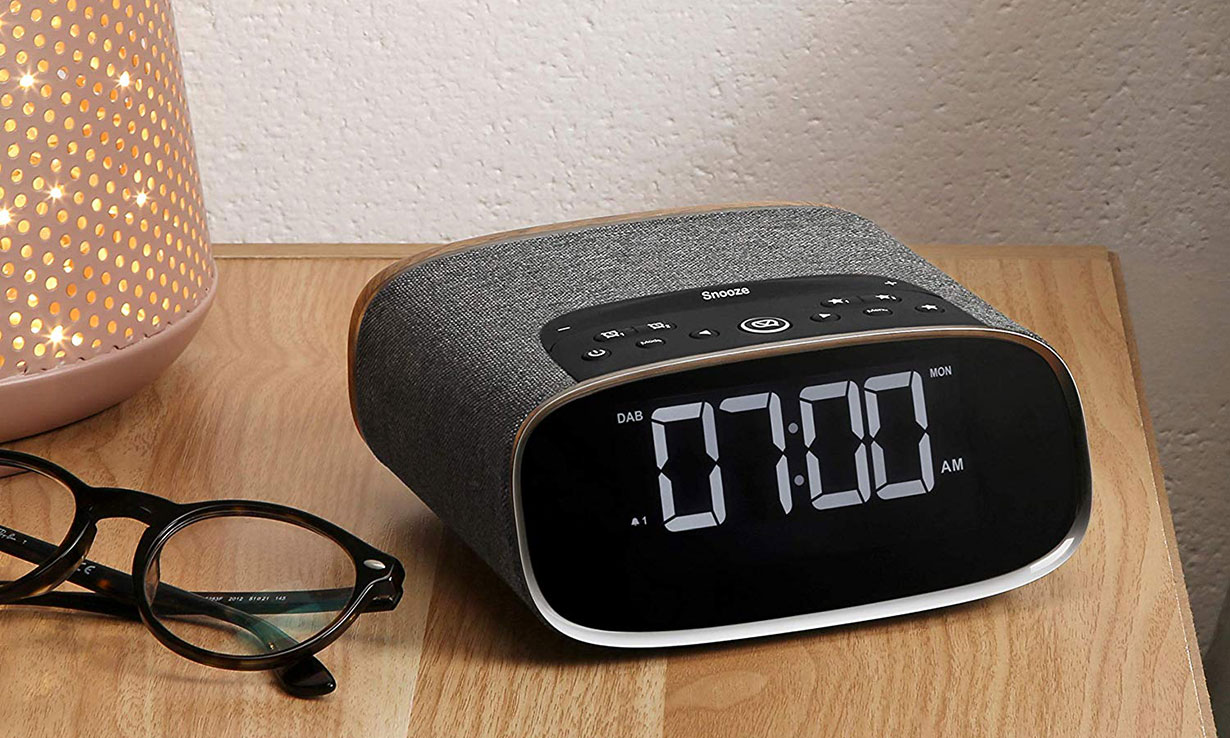 If you’re a fan of traditional alarm clock radios such as the Pure Siesta range, the VQ Lark DAB+/FM radio could be just the ticket. It has dual independent alarms, with extensive sleep and snooze functions. Unusually for a compact alarm clock radio, it has stereo speakers and features a passive-bass radiator underneath, which VQ says enhances the sound quality.

Its screen is slightly angled, which makes it easier to read when standing up once you’re out of bed. There are two direct-access preset buttons and you can store an impressive 60 presets for easy access to your favourite stations. It also has two useful USB sockets for charging your portable devices, plus a headphones socket and 3.5mm aux-in for a wired connection to your devices.

See whether the sound quality is as impressive as the features in our VQ Lark review. 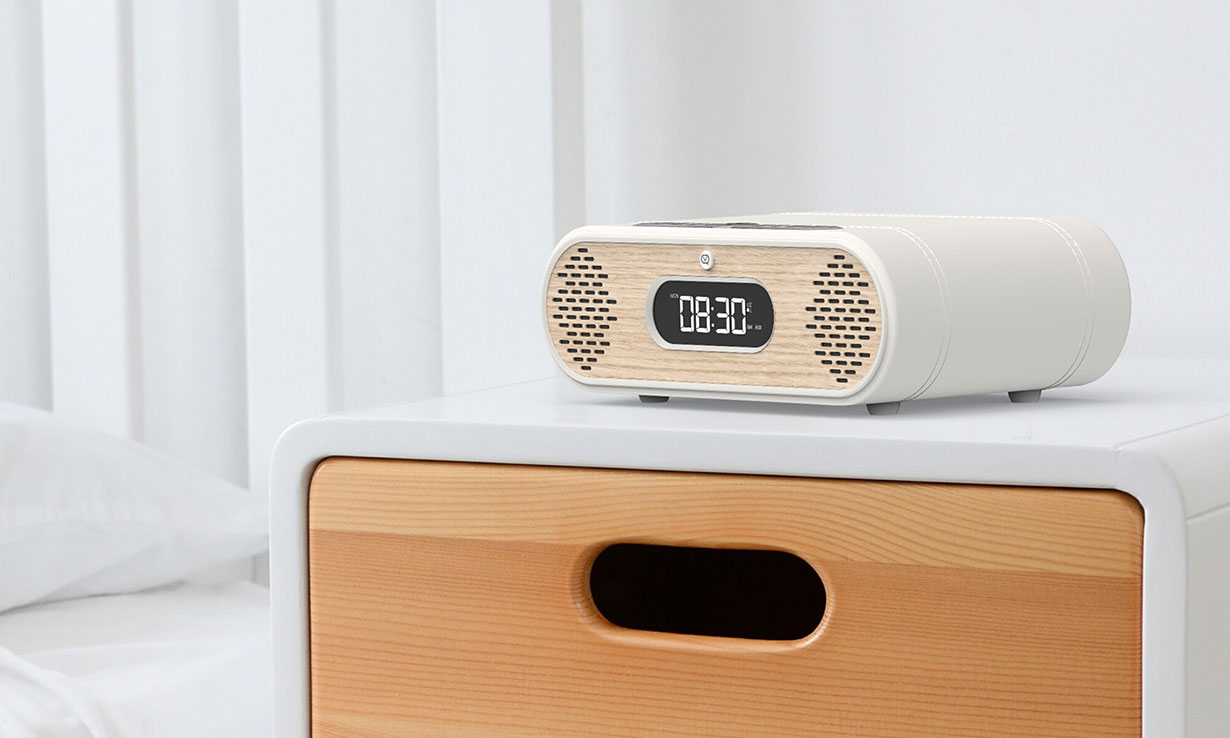 Alarm clock radios aren’t typically known for their sound quality, but the stereo VQ Rosie-Lee is designed to be an exception. VQ describes it as a ‘labour of love and a craftsman’s dream’, with the radio’s body handcrafted from a single piece of wood, curved to form the main shell.

It’s a DAB+/FM radio with two independent alarms, flexible sleep and snooze functions, and even a kitchen timer. It has a large 3-inch screen with an auto-brightness feature, and premium build quality throughout. There’s also Bluetooth to steam audio from your smartphone, either stored locally or streamed from the internet.

Does this look like your dream radio? See what our lab experts thought in our VQ Rosie-Lee review. 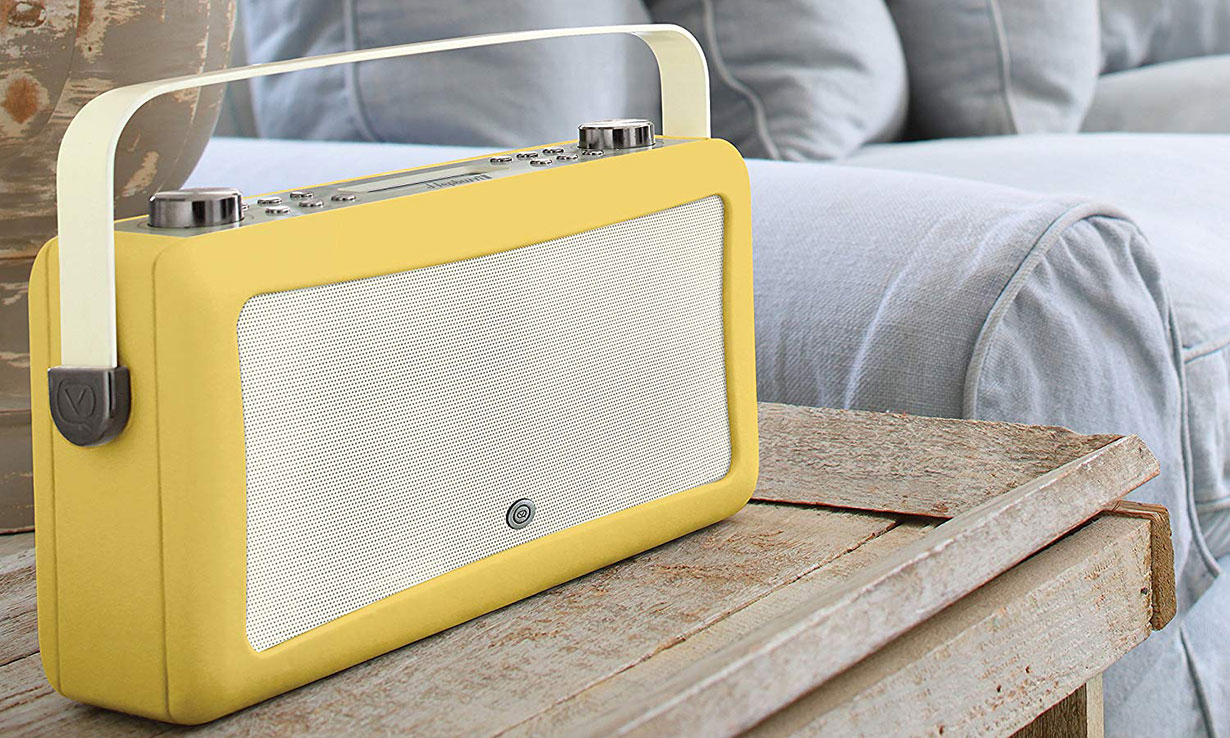 Evoking the class of the Golden Age of Hollywood, the VQ Hepburn Mk II is available in a vibrant range of colours as well as Laura Ashley and Emma Bridgewater prints.

It almost looks like a handbag, with its carry handle and fabric frontage, and the rotary knob controls help you to access up to 10 radio-station presets. It’s not short on features, with a headphones socket, aux-in socket for wired connections, Bluetooth to play audio from your smartphone, and a built-in equaliser to fine-tune the sound to your personal preferences.

So is it worthy of the Hall of Fame, or merely style over substance? Our critics put it to the test in our VQ Hepburn Mk II review. 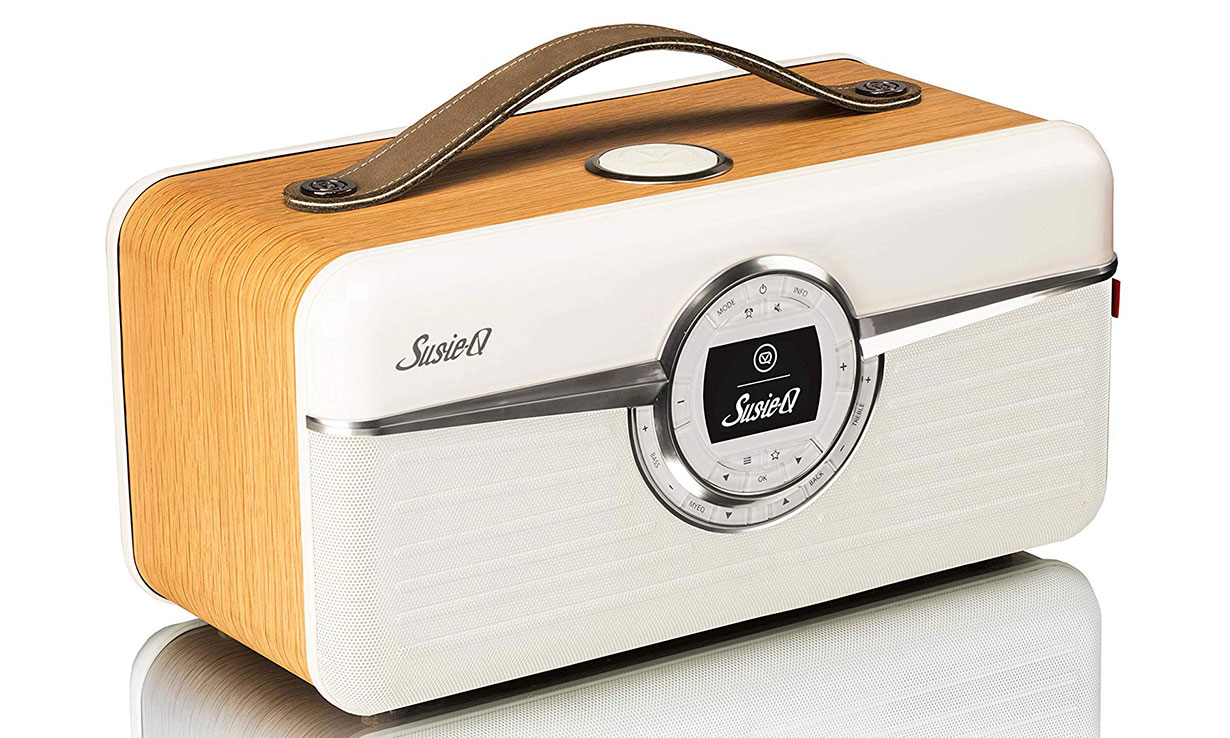 Those looking for the ultimate tour-de-force of radios may have found their match. VQ claims that the four-speaker stereo Susie-Q DAB+/FM/internet radio gives you hi-fi-rivalling sound quality, and that’s just the beginning.

It supports seemingly every feature you could possible want from a radio, including wi-fi and Bluetooth to connect to your devices, comprehensive alarm and preset functions, an equaliser to adjust the sound to your personal preferences, and a suite of wired connections including RCA sockets to connect it up to bookshelf speakers. It even has multi-room support to connect to UNDOK app-compatible speakers wirelessly.

And this is not to mention the real-wood finishes (oak and walnut) and its retro enamel and flared-chrome premium styling.

Is this a jack of all trades and a master of none, or could it really be worth the sky-high price? Our discerning listening panel with decades of experience between them give the final verdict in our VQ Susie-Q review.

Find your ideal radio by browsing all our best radio reviews.