The Zenith Radio Corporation created the first TV remote back in 1950. The Lazy Bones, as it was called, connected to the telly with a wire. Five years later Eugene Polley made it redundant with the Flashmatic, the first wireless remote. Manufacturers have been developing designs ever since, but is the advent of voice control rendering remotes obsolete?

Our tests already cover what the voice control on each TV is capable of. To find out how useful voice control truly is, we decided to take a TV from each leading brand – LG, Panasonic, Samsung and Sony – and look a little deeper.

Top five TVs for 2019 – with more than 150 TVs reviewed this year, we know which ones are worth buying.

ThinQ is a proprietary assistant developed by LG, but having Google Assistant built in too can lead to the two seemingly competing with each other. Whenever you make a request, the TV decides to use ThinQ to handle it or leave it up to Google. This background delegation worked fine most of the time, but every now and then Google Assistant would provide a serviceable answer to our question only for ThinQ to stick its oar in and start loading a webpage for an answer.

One supposed benefit of having a third-party assistant, such as Google or Alexa, is the ability to control the TV without even holding the remote. Normally you need to press the microphone button on the remote, but you can use a Google Home speaker as a go-between. We wouldn’t recommend it though. The cumbersome interactions always need to start with ‘OK Google, ask LG’ as if your TV was a school friend you’d fallen out with. Google would often acknowledge our request, but the state of the TV rarely changed.

Searching for content was the standout (and arguably the only particularly useful) way to use voice control on an LG TV. You can ask to see a specific show or search by genre and see results from your streaming apps and electronic programme guide. More often than not, though, pressing a button was by far the quickest way to interact. LG also gives a list of commands to try with the TV. This sounds useful, but we found that many of them didn’t work. 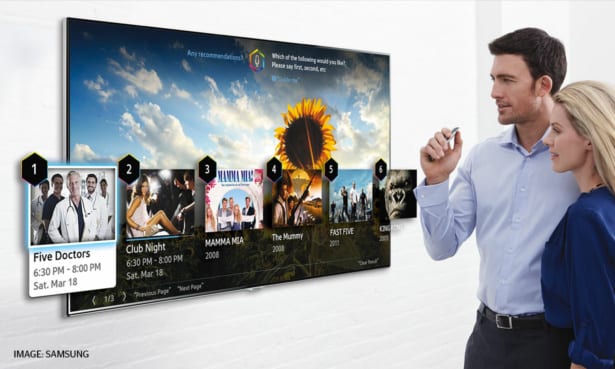 Like LG, Samsung has its own proprietary assistant, Bixby, but also supports Google Assistant. Unlike LG, Bixby is the default assistant for all requests. Google Assistant is only used if you’re conversing via a Google Home speaker.

Generally, we found the speech recognition on all the assistants to be excellent, but Bixby struggled the most. Names were particularly taxing, which makes searching for films starring your favourite actor problematic. Although it had issues understanding us, Bixby is the most versatile assistant. You can control media playback, set sleep timers, open websites and even press buttons on the remote. Being able to press buttons on the remote using your voice is only useful if you’ve lost it, but it showcases another benefit of Samsung’s TVs: you don’t need to press a button to prompt it to start listening, you can say ‘Hey Bixby’ to get your TV’s attention.

Searching for shows was more awkward than we found with LG. Voice-to-text only worked on certain apps, such as YouTube, but not on Netflix, even though the feature is available on Fire TV Sticks. We also noticed that unless we specified a streaming service to search through, the TV would only look through a limited selection of apps rather than everything we had installed.

The list of commands were useful and they all worked, unlike LG’s.

Since Sony’s mid to high-end TVs run Google’s Android operating system, its assistant comes built in too. The level of control is more basic than what we saw with Samsung’s TVs, but the voice recognition was accurate. We also tried Google Assistant on a Philips set running Android TV and found the recognition to be poor, so the accuracy of the voice control is as much the job of the TV manufacturer as it is the software.

One supposed benefit of having voice control on a TV is then using it to control other smart products in your home, such as light bulbs and thermostats. LG did a good job of controlling other ThinQ enabled appliances, but struggled with third-party devices. Our experience using the Samsung as a smart hub wasn’t great either.

Sony, on the other hand, does a stellar job of consolidating your IoT (Internet of Things) devices and giving you control over them through your voice and the TV.

To use Alexa you’ll need an Amazon Echo. Despite needing to send your requests via another device, we found the TV reacted swiftly but the commands are basic. There’s no way to search for content via an Echo. 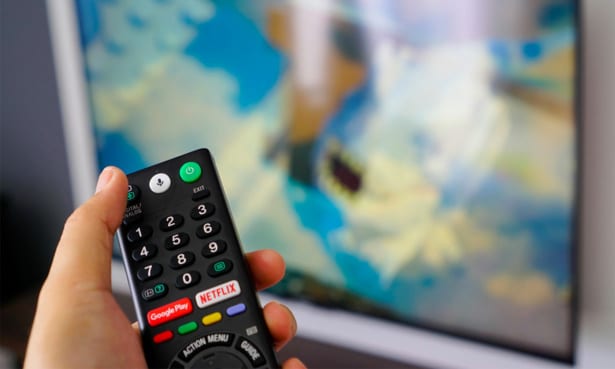 Panasonic is the only one of the big four brands not to have a dedicated voice assistant, but you can still control its TVs with your voice if you have the right equipment.

Since there are no microphones built into any Panasonic remotes, a Google Home or Amazon Echo is required. This makes it the fiddliest to use and limits the number of queries the TV can respond to. Only really basic functions work, such as turning the TV on and adjusting volume, and the majority are more easily and quickly achieved by using the remote.

Voice assistants are miles away from replacing remotes, but they are useful in some cases.

Searching for content is handy, since it means you don’t need to look through all your streaming apps yourself. A voice assistant can handle this sort of request much more efficiently by trawling all the apps for you for shows and films that match your request.

There’s a gulf in competency between integrated assistants and using one via a Google Home or Amazon Echo. The range of commands, speed and accuracy of responses makes integrated assistants the way to go. So don’t expect a TV that says it ‘Works with Alexa and Google Assistant’ to work particularly well.

Useful commands to try with your TV