Chancellor of the Exchequer, Rishi Sunak, has announced £2.5bn in funding to fix 50 million potholes across the UK over the next five years.

The funding package, part of the 2020 Budget, will be offered to local councils, which are responsible for road resurfacing works.

The research revealed a huge increase in the number of potholes reported on main roads and motorways between 2017 and 2018:

Reporting any potholes you come across is important, helping you get compensation for damages, and alerting the council to roads that need repairing.

If you come across a pothole, here’s how to report it and make a successful compensation claim.

Potholes usually appear in the winter months and early spring, so now’s the time to look out for them.

If you do come across one, make sure to take a photo, including an object (such as a water bottle or shoe) to show the scale, as well as a photo of any damage caused.

ote down the road name or postcode, and any factors that might make the pothole a particular risk (eg if it’s in the middle of a junction or a cycle lane).

Whether or not it has caused harm, it’s important to report any potholes you come across.

Compensation claims often depend on whether a pothole has already been reported, so even if you haven’t experienced damages, it’s important to let the council know.

Here’s how to report one:

If you’ve had to call the emergency services or a recovery team, make sure that they’re also aware of it.

Before making a claim, you’ll want to get a quote for the repair of your vehicle or bicycle.

It’s also worth contacting the council or Highways Agency to check whether it will consider reimbursing you.

Make sure you follow any specific claims protocol and provide all information that’s asked for.

And keep receipts for urgent repair work, as you may be able to be reimbursed. 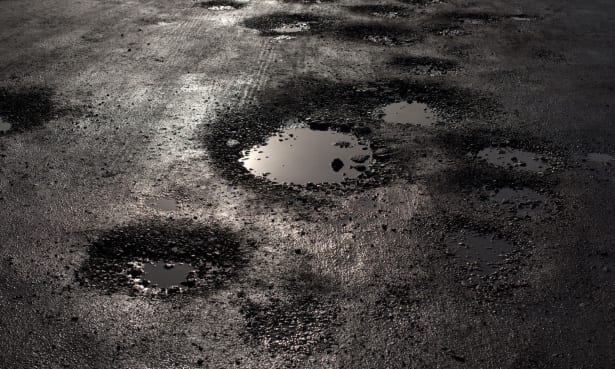 If your claim is successful, the council or relevant authority will make you an offer for the repair.

But this amount may not factor in extra travel expenses (eg bus fares if your vehicle is damaged).

Don’t be afraid to negotiate with the council if you’re still out of pocket.

The council may reject the claim if it can show that it wasn’t aware of the pothole, or if a reasonable system was in place for inspecting the road.

If you’re unhappy with the outcome, you can ask to see details of the road inspection, to see whether the council or Highways Agency followed it correctly.

It’s worth appealing again if you think your claim was rejected unfairly.