eBay’s product review system has concerning flaws, a Which? investigation has revealed, with easily exploited gaps that are allowing unscrupulous sellers to mislead shoppers.

Serious issues with eBay’s product reviews allow sellers to abuse features designed to protect and inform buyers. These include:

Customer reviews can make all the difference at product-packed online stores: 90% of consumers told us that good customer reviews are important when buying an item from an online marketplace, according to a survey we conducted in September 2019.

But we’ve found that the reviews shown on products on eBay may be unrelated to the product you are actually buying, meaning you could end up with an item that isn’t as good or even the same as it appeared on a listing, or a potentially dangerous counterfeit.

The problems with eBay product reviews

We looked at several categories of products on eBay, including chargers, charging cables, headphones, smoke alarms and travel adapters, and noticed a series of issues.

Some items purporting to be the same, and sharing the same product reviews, looked completely different to each other in the images on the listings. We also saw reports within reviews that the product that arrived wasn’t what the buyer expected, was faulty or, in some cases, unsafe.

To investigate further, we ordered a range of supposedly ‘official’ Apple and Samsung accessories, including chargers and USB cables.

We purchased multiple products from different sellers, though they all shared the same reviews. For the 20 products we ordered, eBay showed that more than 33,300 had been sold. 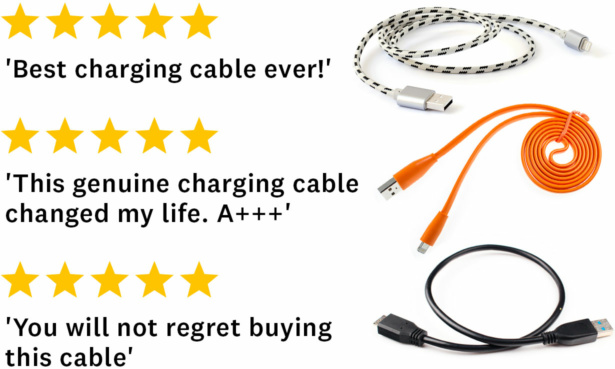 Despite sharing reviews, what appeared on eBay to be the same product were clearly different.

An Apple USB cable we ordered had the same 6,848 reviews across multiple listings. Shockingly, the products that arrived were all completely different from each other.

One had a corded style cable with a cheap looking USB connector, while another was double the length of the others. Even two of the similar looking products had differences – the cords were different shades of white, as well as a different thickness. One was sold on eBay with Apple listed as the brand, but what arrived was actually branded as ‘Core’.

Across the five products, 1,391 had been sold – meaning nearly 1,400 buyers received products that bore no resemblance to each other, despite sharing reviews. 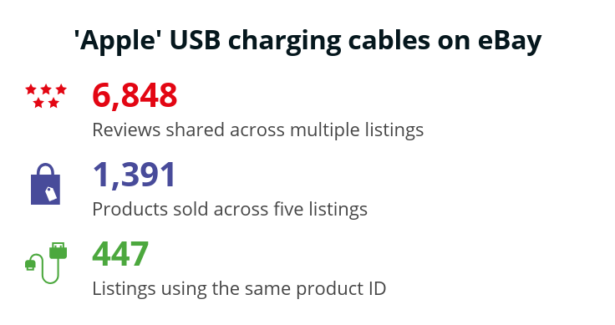 Apple told us that it recommends using only accessories that Apple has certified and that come with the MFi badge. Find out more about spotting counterfeit Apple products.

For one of the Samsung chargers we ordered, we received three nearly identical products. Of the other two, one was a used product that arrived without a cable, and the other was a completely different charger.

Not only that, the cable that arrived with the different charger was shoddily put together – we could pull the cable out of the USB connectors, a potentially dangerous issue.

One of the cables that claims to be Samsung branded fell apart as soon as our researcher plugged it in, revealing the spot of superglue designed to hold it together. It shares reviews with other, more robustly put together cables.

We contacted Samsung, who told us that it’s likely all of the charging plugs were counterfeit.

It said: ‘We recommend customers take care to buy genuine products from reputable sellers, and that particular care is taken when purchasing from online auction or marketplace sites. The use of counterfeit or incompatible third party cables and chargers can lead to damage to the device.’ 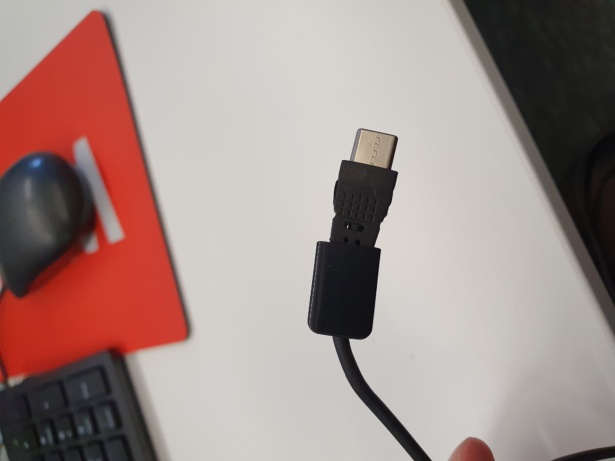 While conducting our research, we checked the product recall database Rapex for counterfeit products that had been found on eBay and reported since 2017.

Of the products in this list, we found three counterfeit Samsung chargers that were still for sale on the platform – and we found multiple listings sharing the same reviews, all scoring at least 4.8 stars.

For one of the products there were 22 product ratings, and 100% of people said they would recommend the charger as well as rating it as good quality. Reviewers praised it for being ‘genuine’, ‘a quality product’ and ‘fantastic’ – a suspicious pattern of reviews and ratings for a counterfeit product.

Concerningly there were 566 listings, in total, for the three counterfeit chargers. Although not all of these shared reviews, multiple products did – suggesting this is an easy way for unscrupulous sellers to offload highly rated recalled products on to unsuspecting buyers.

We also ordered a pair of ‘genuine’ AKG headphones with an apparent five stars from five product ratings, whose reviews were once again shared among numerous similar product listings.

Visually, both this and a set of identical headphones that we knew were genuine were extremely similar – the main difference appeared to be a slightly different font on the Samsung logo on the cable. However, they sounded quite different – we noticed an audible hissing noise behind the audio that would seem to indicate they were either fake or faulty.

Since we purchased this item, other buyers have added to the product reviews complaining of similar issues. The product star rating has dropped to 3 out of 5, with nearly half of buyers rating it at one star.

We discovered further issues with review sharing across eBay that suggest it’s a wider issue. A quick search uncovered six products across the smoke alarm and travel adaptor categories where listings clearly showed different items for sale – despite sharing reviews.

A search for one smoke alarm revealed an unrelated carbon monoxide alarm with the same reviews, and other images used on the listings clearly showed different products.

We were also able to identify three quite different travel adaptors sharing the same reviews. One of the products shared 113 product ratings, and a score of 4.3 stars. Another had low product review numbers, just 10, but a nearly perfect 4.9 star rating. 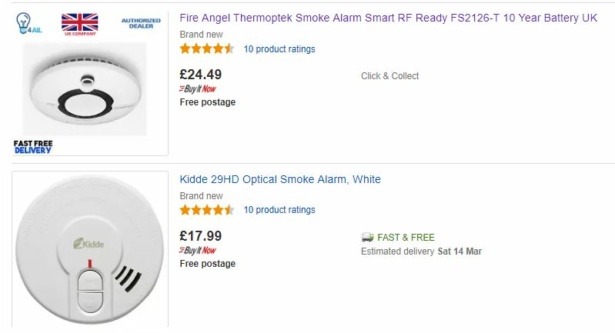 How are eBay’s product reviews being manipulated?

When an item is listed on eBay, certain product identifiers can be used by the seller. This could be a Manufacturer Part Number (MPN), Global Trade Item Number (GTIN) or Universal Product Code (UPC).

It will also be given an eBay Product ID (ePID), which relates to that product within eBay’s database. This code is not unique to that seller, and can be chosen by any other seller listing the same item. It’s designed to make it easier for sellers to list products, as it will pull relevant information on to their listing, and for buyers by helping them find the same product from different sellers at potentially different price points.

But using the same ePID or other product identifier has another consequence – reviews from all listings of the product can be shared, regardless of the seller or the condition of the product. This can mean that someone selling a slightly different product, or perhaps a counterfeit, can benefit from the positive reviews accumulated by a genuine item.

eBay claims that this system allows buyers to see feedback from other buyers, no matter who they’ve purchased a product from.

We’ve found that it doesn’t always work the way it should though, uncovering sellers sharing reviews across completely different products – abusing a system designed to protect buyers.

The problem with new versus used

For one of the Samsung chargers we ordered four new products, plus a used item. Unlike buying a pre-owned designer handbag, pair of shoes or coat where you often find just one item available, some ‘used’ products seem to be sold in high volumes – the seller of the used charger had sold 218 and had 282 available.

Despite these products being ‘used’, the listing still had the same 90 product ratings as the listings for the new products. Only two of the reviews were for ‘pre-owned’ versions of the charger.

The used product that arrived didn’t have a cable with it. While this was declared on the listing, many of the reviews mentioned the quality of the cable that arrived with the plug. It was also in a significantly different condition to the new chargers. This may be expected for a used product, but the fact that the majority of product reviews are five star could be misleading to buyers.

eBay says that users like to read reviews about both new and used items, and that all reviewers are required to indicate the condition (new, used or pre-owned, for example) of the item they purchased.

This is a particular concern with electrical products such as chargers, or safety items like smoke or carbon monoxide alarms.

Strangely, eBay doesn’t discourage sellers from leaving reviews on their own products, and it’s even a feature question within the frequently asked questions.

This means that, while their review may appear as unverified unless they purchased the item, buyers may see a positive review from the seller themselves.

Amazon, on the other hand, has a strict policy on sellers reviewing their own items, and clearly states that neither the seller nor their family or staff members should leave feedback on their listings.

We are calling on eBay to update its product review terms. 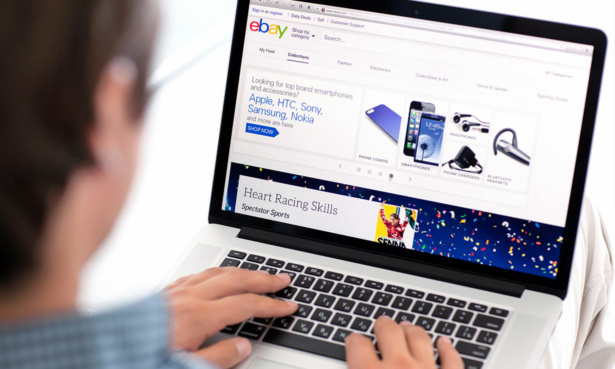 We shared our findings with eBay, as well as our concerns that its review system was being abused by unscrupulous sellers.

An eBay spokesperson told us that it would investigate the listings shared, and remove any that breach its policies. It said users can make use of the ‘report’ feature to report a concern with a listing, its sellers, or its reviews.

The online platform told us it enforces its Product Safety Policy at a global level using block filter algorithms that prevent unsafe products being listed, and that its international security teams work around the clock to help safeguard our marketplace. It said that enforcement action is taken against any seller found to be in breach of its policies, which can be in the form of a warning, suspension or ban.

Nearly a fortnight after we shared our findings with eBay, we discovered that all of the listings, including the recalled products, were still live.

However, after following up with eBay once again on the issue, it removed most of them.

Which? calls for action on review abuse

eBay must take urgent action to make its review system more robust and transparent, so that consumers can trust the customer feedback on products they are buying.

Natalie Hitchins, Head of Home Products and Services, Which?, said: ‘Our investigation has uncovered yet another example of online reviews being manipulated to mislead people. eBay’s product review system is confusing for consumers and could even direct them towards counterfeit or dangerous products sold by unscrupulous sellers.

‘Online reviews influence billions of pounds of consumer spending each year. The CMA must now investigate how fake and misleading reviews are duping online shoppers, taking the strongest possible action against sites that fail to tackle the problem.’

If you’ve spotted a fake review, or been caught out by one, get in touch and tell us your story – email the Which? Fake Reviews team at fakereviews@which.co.uk.

Read more about our research and investigations into the problem of fake reviews, and sign our petition to help stop fake reviews.