Online marketplaces eBay and Amazon are failing to crack down on a spate of coronavirus profiteering by sellers. Our investigation has found consistent overpricing of household items, including cleaning products, thermometers, baby formula and tampons.

At the start of this month, the Competition and Markets Authority (CMA) warned that traders should not be exploiting the coronavirus outbreak to take advantage of people through price gouging and threatened to take strong action if the problem persisted.

But amid continued reports of bulk buying and empty shelves in stores, we’ve uncovered multiple examples of essentials items being sold for inflated prices on eBay and Amazon.

We want marketplaces to take action on those looking to profit from the COVID-19 pandemic – to stop shoppers from being duped into buying essential goods at a significant markup, and removing the incentive for sellers to bulk buy in the first place by removing the offending listings.

Find out more about how to spot and report price-gouging on marketplaces, and how to get your money back if you’ve been a victim.

See our coronavirus hub for all the latest news and advice 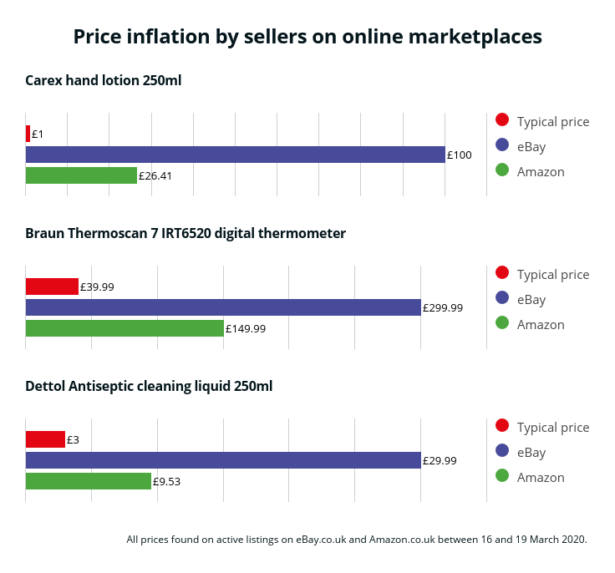 Everyday items that are now difficult to find in supermarkets are regularly, and heavily marked up at Amazon and eBay. Marketplaces are taking action against sellers offering everyday items at inflated prices, but we found plenty of examples where this action simply hadn’t been taken quickly enough.

For some listings that were removed during our snapshot investigation, eBay showed that multiple items had already been purchased before the listing could be taken down. 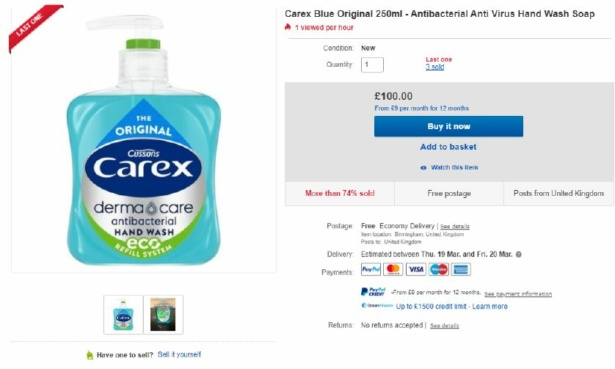 Items that for weeks have been difficult or impossible to find in local shops have been appearing consistently on eBay and Amazon during this time, suggesting bulk-buying by consumers is not to stockpile at home – but rather to sell and make a massive profit online.

250ml bottles of Carex, which often retail for just £1, were seen priced at Amazon and eBay for more than £10 each. One eBay listing showed the item priced at £100 – it was labelled ‘last one’, with three others apparently already sold. Another at Amazon was available from a third-party seller for £26.41.

Carex was commonly available in multi-packs – a pack of six was listed by the same storefront for £49.99 (£8.33 each), which also listed a three-pack of no-touch refills for £39.99 and a twin-pack of 5-litre refills for £129.99 – still more than three times the usual volume price for a regular 250ml bottle.

There’s been plenty of noise about stores running out of hand sanitiser and the ridiculously inflated prices it’s being sold for via online marketplaces. Despite this, and marketplace claims to be clamping down, we found a whole swathe of listings still active.

The majority of supermarkets and pharmacies have now placed a limit of two antibacterial hand gels per customer, although it’s clear that some customers are continuing to find a way around this limit.

A 50ml bottle of Carex antibacterial hand gel was being sold for more than £100 by multiple sellers on eBay, despite usually costing around £1.50. A multipack of four 300ml Carex Aloe Vera gels apparently sold for £9,999, although we believe this may have been a test or a hoax.

One eBay seller listed a 750ml bottle of Domestos Thick Bleach on eBay for £6.95, despite the accompanying picture showing that the bottle is clearly labelled with the price of £1. A similar bottle of Domestos bleach was being sold on Amazon for £7.66.

A Domestos Bleach Spray, usually costing £1.75 at Sainsbury’s, was on sale via eBay for £14.50 – more than eight times the cost. There were multiple listings selling the same cleaning product for around £10. 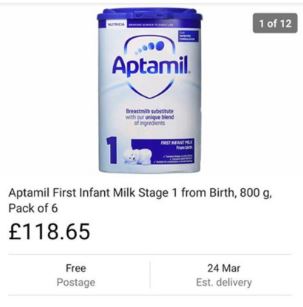 We understand that breastfeeding is best, but those needing to use formula milk have had difficulty getting hold of it in supermarkets with reports of infant and follow-on formula going out of stock.

On eBay, we found sellers offering six packs of infant formula, which is vital for young babies who aren’t being breastfed, for more than £100 – in Sainsbury’s, infant formula usually costs around £10 a pack.

Some sellers were selling individual 800g packs for around £40, while another was priced at as much as £60.

We saw the same product priced at £10.50 and, even worse, the price listed on the site rose by nearly £1 in less than a day.

After noticing a lack of availability of thermometers on large sites such as Argos, our researcher checked both eBay and Amazon for the Braun Thermoscan 7 IRT6520.

It’s usually priced at less than £50 and before selling out was on offer for £39.99 at Argos. But on eBay we found a listing selling the same model for £299.99. Seven people had viewed the listing.

We found the same seller also offering a white version of the thermometer for £249.99 – potentially making £550 from two items that should cost no more than £100.

Reports of bulk buying of sanitary products began rolling in during the week commencing 16 March, with shoppers reporting that shelves were quickly emptying. On eBay, an 18-pack of Tampax Compak Pearl were found for £6.31, rather than the usual £3.15 at Boots. Some 257 packs had been sold. 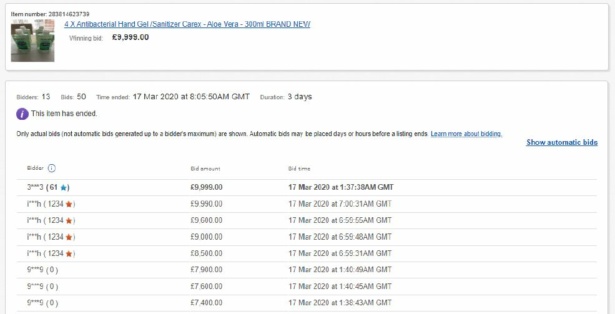 Most of the products above were for sale with a ‘buy it now’ price, but we also took a look at auction style listings, where sellers can bid for an item.

Worringly, we spotted a raft of overpriced items being aggressively bid on by shoppers, driving the price up even higher.

A bundle of three Dettol Sprays and three packs of antibacterial wipes had 78 bids with less than an hour to go, with a price of £210. The starting price was £0.01 and there were 11 bidders who quickly upped the price.

One listing for three cans of Dettol Antibacteral Disinfectant Spray had attracted 38 bids with less than four hours remaining, and the auction cost was up to £49.

Shockingly, we also saw a large number of auctions selling similar products in ‘used’ condition. A search for hand sanitiser revealed more than 100 listings of bottles in varying conditions, containing varying amounts. Prices were similarly inflated – an opened bottle of Purell gel refill had a price of £55 with 21 bids, and another was at £31 from 14 bids.

It goes without saying that buying certain types of products – especially those that claim to help clean or disinfect, in used condition, is certainly not advisable. 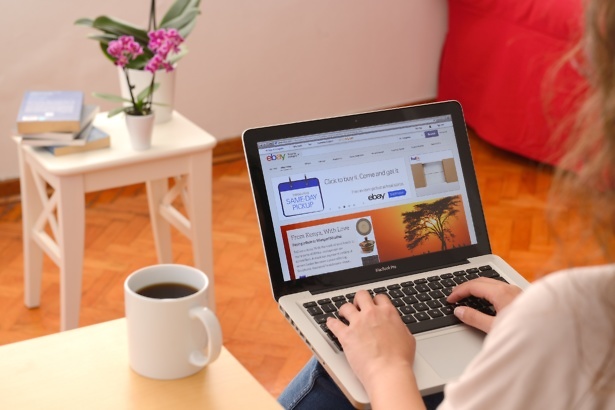 What are eBay and Amazon doing to address the issue?

Both eBay and Amazon say that they are taking steps to address this clear exploitation of their marketplaces.

We shared 35 listings of essential items that had inflated prices with eBay, and 11 with Amazon. All the listings have now been removed.

Amazon told us: ‘There is no place for price gouging on Amazon. We are disappointed that bad actors are attempting to artificially raise prices on basic need products during a global health crisis and, in line with our long-standing policy, have recently blocked or removed tens of thousands of offers. In addition to removing these offers, we are terminating accounts.’

It told us that it has put limits on who can sell items in the face mask and hand sanitiser categories, with only pre-approved white-listed vendors allowed to sell these items. Ebay says it’s continually monitoring the situation and will consider widening the ban to include other categories if appropriate.

Which? challenges marketplaces to up their game – and urges calm from consumers

Online marketplaces should be bringing in far stricter controls to identify and prevent these practices of charging unjustifiable high prices for essential products. They must communicate their policies clearly and directly with sellers.

If the systems used by the tech giants are not capable of preventing harmful listings from appearing at all, as our investigation suggests, then better manual systems need to be put in place to identify and remove them.

If online marketplaces fall short in the measures they are taking to remove listings and suspect sellers accounts, the CMA’s new coronavirus taskforce needs to take action to stop these practices.

Sue Davies, head of consumer protection, Which?, said: ‘Online marketplaces have taken some action against coronavirus price gouging, but our investigation shows unscrupulous sellers are still cashing in on people’s fears by selling essential items at extortionate prices on eBay and Amazon.

‘These companies must make good on their pledges to stamp out coronavirus profiteering and if they fall short the CMA must be ready to take strong enforcement action.

‘The government should consider how it will work with the retail sector as a whole to keep the price of essential items reasonable as the fallout from the coronavirus outbreak continues.’

The CMA announced last week that it has set up a dedicated COVID-19 taskforce, designed to monitor retail practices during the outbreak.

The taskforce will be able to warn firms suspected of exploiting customers through unjustifiable prices or misleading claims, and take enforcement action after a warning if there’s evidence that firms have breached competition or consumer protection law.

The COVID-19 taskforce has a dedicated email address – covid.monitoring@cma.gov.uk – for people to flag price increases related to the coronavirus pandemic.