Make your Christmas dinner complete with a special vegetarian or vegan centrepiece. We tasted nine of the big brands’ options so you can make the best choice.

While turkey and beef are Christmas dinner mainstays for many, an exciting range of vegetarian and vegan alternatives for the big day are the products making headlines in the world of food blogging. Whether it’s a full-on turkey impersonation, a nut roast or a spicy pastry, the UK’s biggest supermarkets really do have something for everybody.

Which? researchers put them to the test.

We asked each supermarket to submit their choice of vegan centrepiece. Each product was blind-tasted by three vegetarians and two meat-eaters. Each dish was cooked in the oven to the pack’s instructions.

Of the nine different dishes on offer from a cross section of supermarkets, these were our tasters favourites.

Asda’s fake turkey was the overall favourite among our five tasters.

It’s a worthy centrepiece and a great stand-in for a real turkey joint, so if you’re serving both alongside one another the vegetarians will not feel short-changed. The strong herby taste of the stuffing inside the impressively textured soy-based protein makes it a crowd pleaser, and the sprig of thyme on top gives it that extra attention to detail that Christmas is all about.

It slices easily, too, although our tasters were crying out for some gravy to really tie the flavours together. Speaking of gravy, read our taste test of the best vegetarian gravy. 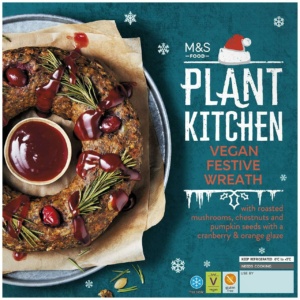 Simply put, it’s a nut roast but in a ring shape. But it’s so much more than that, and our tasters really liked it. Crunchy nuts, tasty herbs and a delicious cranberry glaze that’s drizzled on top during cooking make it a lovely, if rather pricey, vegan option.

Buy from M&S and Ocado. 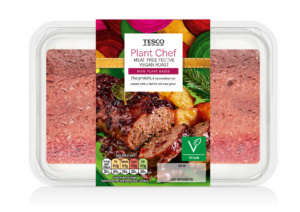 This chunky roast has a meaty, reddish hue to it. There’s plenty of herby flavouring, and the cranberry sauce added during cooking adds moisture and sweetness. Our tasters were impressed by how much bite the fake meat had, although some felt it was more like a giant, albeit tasty, sausage than a centrepiece roast.

Available from 30 November at Tesco stores and online.

These swirly pastry parcels don’t taste much like Christmas and aren’t really a suitable substitute for turkey or other meat joint alongside veg and gravy in a traditional Christmas dinner, but will be sure-fire talking point if laid out in an evening buffet or if you’re planning an alternative Christmas dinner.

The filling is tasty with a Moroccan-style spicing according to Waitrose. Not all our tasters were convinced by the pastry, however, with some finding it too bready in the centre of the swirl. 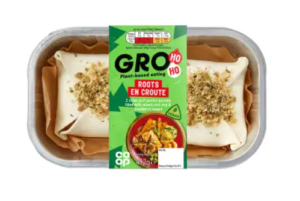 These pert puff pastry parcels are packed with parsnips, root veg, carrots and cranberries. The pastry crisped up nicely in the oven. The filling was nice enough, if a tad sweet because of an overabundance of cranberry. Some felt the sauce was covering up for an otherwise bland flavour, but others noticed a perky pepperiness to the filling.

This dish certainly lacked any evocative christmassy spicing; Co-op may have played it a bit safe here but these parcels certainly won’t offend anybody, but they don’t really taste like Christmas either.

Buy from Co-op stores only.

While the five options above tickled the fancy of the majority of our tasting panel, the remaining four struggled to convince many of them.

Sainsbury’s Plant Pioneers No Turkey Parcels (£6, serves 2, vegan). Looked promising but failed to deliver for our panellists, with a filling that tasted mostly of bland stuffing and a fake bacon wrapper that was too dry and crispy. Buy from Sainsbury’s.

Iceland No Meat Co No Bull Wellington (£3, serves 2, vegan but ‘may contain milk’). These split the panel with the two meat eaters raving about its ‘no nonsense’ meat pie credentials. The vegetarians were at the other end of the scale, complaining of an over-sweet red-onion-dominated filling. It’s cheap, so perhaps one to try before the big day to see if it’s likely to impress. Buy from Iceland.

Morrisons The Best Beefless Wellington (£5, serves 4, vegan). A disappointment. The strange combination of a mince-like filling with a huge fake meat sausage running through it failed to impress our panel. The pastry was nice and crisp, but the filling was overly sweet with a strange texture. Buy from Morrisons.

Aldi Plant Menu No Turkey Roast (£2.99, serves 2, vegan). Bottom of the pile, with four out of five of our panellists entirely unimpressed with the bland fake turkey’s overly chewy texture and the cranberry filling’s oversweet taste. One panellist rightly pointed out that it does boast a bit of a Christmassy taste, so it does have that going for it if not much else. From Aldi stores only.

Need more trimmings for your roast? Our guides to the best Yorkshire puddings and the best frozen roast potatoes should get you started.