Some would argue that a Christmas lunch isn’t complete without a scattering of small sausages wrapped in bacon.

Whether you’re a fan of the classic pig-in-blanket, or want to get your hands on a vegan version, we’ve tasted own-brand offerings from each of the major supermarkets to find our favourites.

Up first you’ll find our meaty selection, and below that we have the vegan versions, wrapped in either fake bacon or vegan pastry. Read on to find which sausages should find a place on your Christmas plate.

The meaty pigs in blankets

Each supermarket nominated their choice of pigs in blankets. Our two food editors tasted and ranked them, and they are listed below in the order from most to least favourite. All tasting was done blind, so the testers didn’t know what they were tasting until after they’d eaten and scored. 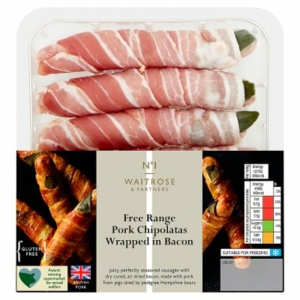 Nicely textured, very porky-tasting sausages with a sage leaf nestled beneath the bacon. Didn’t taste overly salty and were pleasantly juicy without being fatty.

See which pigs in blankets Christmas crisps tasted most like the real thing when we put them through a blind taste test.

Succulent, well-seasoned, meaty chipolatas with a generous bacon wrapping. Not overly salty, with a savoury and herby depth.

Buy from Co-op stores only. 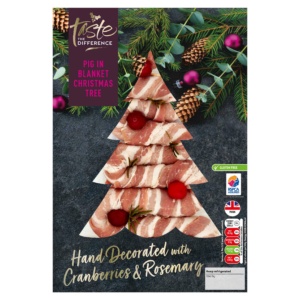 Our food editors savoured the flavour and texture, and while the wonderfully festive design will surely please everybody, the herbs and cranberries might mean they’re not a hit with kids.

You’d normally be able to buy from Sainsbury’s, but they’re out of stock at the time of writing, unfortunately.

M&S Our Best Ever Pigs In Blankets 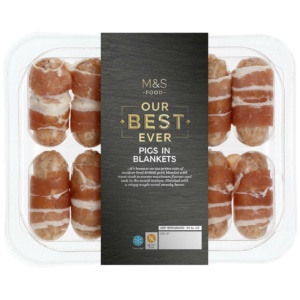 Unfortunately though, when we last checked, these were out of stock at Ocado.

Morrisons The Best Pigs In Blankets 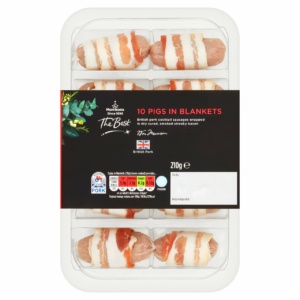 Good smoked bacon on these holding the pig together, so this one could work well as a canape. The sausages had a herby sweetness but were a little more paste-like in texture than others. 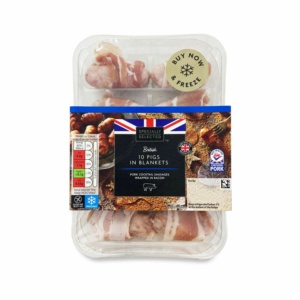 Decent sausages with a classic flavour – not too salty and not too smokey. The dinky size means they’re ideal for the whole family.

Buy from Aldi stores only. 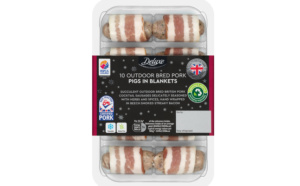 A smooth sausage but bacon tasted salty compared to others. Light taste of herbs. Perfectly fine for a buffet.

Buy from Lidl stores only.

These sausages are made with California Reaper peppers, jalapeños and chilli powder. Unsurprisingly, they are very spicy. But when the shock wore off we got good sausage and bacon flavour coming through. Save for supper or a buffet rather than Christmas dinner as the spice will overpower everything else on a plate. 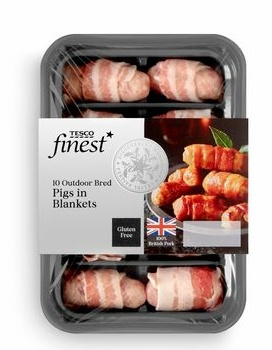 A middle of the road sausage. Not knockout, but not bad. One of our eds found these quite salty as well.

Check stock in Tesco as, at the time of writing, these were showing as ‘currently unavailable’. 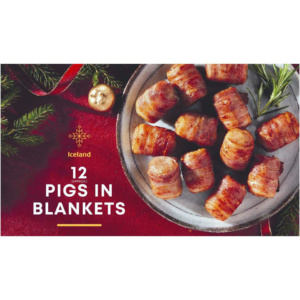 Much more of a paste texture than any of the others we tasted. But petite size perfect to bung straight from the freezer into the oven for a quick buffet.

There must have been a run on pigs in blankets this week as you can normally buy these from Iceland but they were showing as out of stock when we checked.

Each supermarket nominated one vegan pig in blanket product or ‘pig in duvet’ product. Each product was then tested by a group of the same five researchers made up of two meat-eaters and three vegetarians. The tasters did not know the brand of the product they were eating.

Fake bacon was in short supply this year, with only three of the entries actually attempting to simulate crispy bacon. The rest went for pastry (see below). 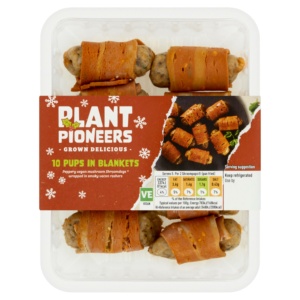 These peppery ‘pups’ taste great, with an aromatic taste and a lovely smokey smell. The pups are surrounded by a slightly sweet and smokey fake bacon. A fine stand-in for pork, but the bacon goes dry in the oven, so they need gravy.

Waitrose Vegan No Pigs in Blankets

Of all the vegan pigs we tested, these were probably the most generous-looking, with big sausages wrapped in plenty of vegan bacon. They weren’t as impressive when it came to taste or texture. Not bad by any means, but the bacon is very mealy and dries out in the oven. The sausage does have good bite to it at least. 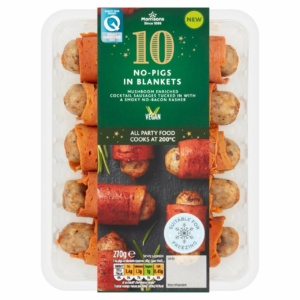 Very similar to Sainsbury’s take on the genre, these had a near-identical bacon (which ended up being a bit too dry and crispy) and a well-textured, if unremarkable, sausage centre.

Asda’s submission has neither blanket nor duvet, and is simply a festive-flavoured vegan sausage. We tasted them anyway, because we don’t turn down a sausage when we’re offered one. Overall, these divided the panel. The vegetarians felt the spiced fruit flavour was artificial and overly orangey and sweet, while the meat eaters were much happier, particularly with the sausage’s texture. Worth a bash; the worst that’ll happen is that they’ll need slathering in gravy.

The vegan pigs in pastry

A large portion of the vegan offering this year was made up of pigs in pastry (often called duvets, but not always). These are a separate category of Christmas snacking since they are far too big and filing to be a suitable presence on a Christmas dinner plate. Of course, it’s up to you, but we reckon these will be better on a buffet. 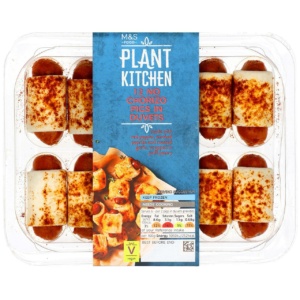 Our favourite pastry-covered vegan sausages. Even meat eaters will enjoy these thick, vegan pastry ‘duvets’ surrounding impressively convincing chorizo-style sausages. Well suited to an evening buffet rather than on a lunch plate due to the very filling pastry and unusual filling.

Buy from Ocado when they’re back in stock. 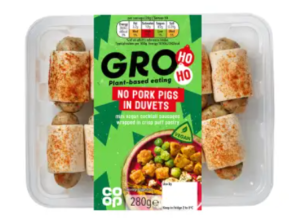 Another pastry offering better for a buffet than on the main Christmas dinner plate. The sausages had a good texture and the pastry crisped up nicely.

From Co-op stores only.

From Aldi stores only. 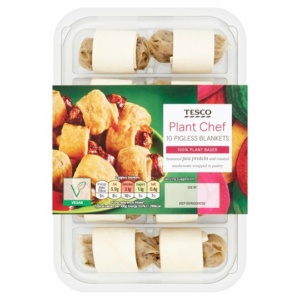 These divided our panel, with one proclaiming it was their favourite of the day, while several others disliked the brittle texture and a sausage that lacked a punchy flavour.

Buy from Tesco when they’re back in stock.

Want more of the best Christmas food? Read our guide to the best vegan Christmas mains and our ultimate guide to cooking the perfect Christmas dinner.