Wondering how to remove stains from your carpet when you don’t have a bottle of something handy?

We tested six popular carpet stain remover home remedies, including bicarbonate of soda, hydrogen peroxide and white wine to see whether any of them work and which is best.

See which bottles were the best carpet stain removers in our tests.

The best carpet stain removers you already have at home

We tested these home remedies alongside bottles of carpet stain remover you can buy.

To the likely horror of any domestic god or goddess we deliberately stained carpet tiles of Saxony grey carpet with red wine and curry. Half of the red wine and curry stains were allowed to dry for 10 hours, while the other half we started cleaning within five minutes.

For these tests we chose: bicarbonate of soda (one sample mixed with water and another with vinegar) hydrogen peroxide, washing-up liquid plus water, white wine and then vinegar on its own.

And our top pick was…. 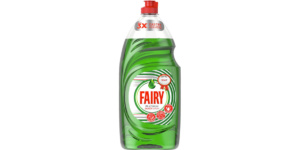 For this test, we used Fairy Platinum Quick Wash washing-up liquid mixed with warm tap water. One squirt of soap in 100ml of warm water.

Easily the best of all the home remedies we tested, washing-up liquid and water tackled curry and red wine stains like a champ.

It takes a lot of elbow grease to scrub it into the carpet, but your effort is rewarded.

We found it had the nicest fragrance out of all the products and home remedies we tested. It also dried the quickest (but still took more than 12 hours). 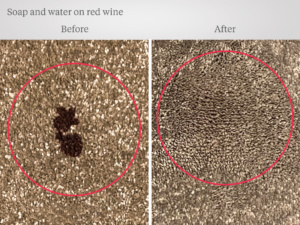 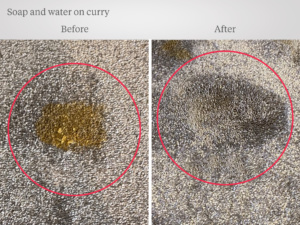 Want a machine to do the work for you?

How the rest we tested fared

Our best advice is if you have a sudden stain and don’t have a dedicated product in your cupboard, start running the hot tap and get out the washing-up liquid.

How we tested these carpet stain remover home remedies

To bring you these results we followed a strict set of tests.

We took 50x50cm carpet tiles and split them into equal zones. Each zone was used for a stain. Our stains were red wine and curry sauce. 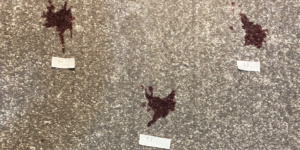 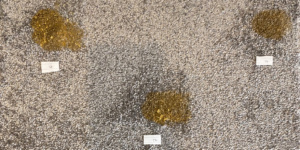