With millions of us taking on home improvement projects over the last 18 months, Which? has done the research so you know which DIY shops and websites to use – and which to avoid.

There’s nothing like a lockdown to make you notice your four surrounding walls – so it’s unsurprising the past 18 months have spurred many of us into action against tired paintwork, dripping taps and shabby furniture.

In fact, DIY has become one of the UK’s most popular pursuits during the pandemic. An online survey of 17,689 people we conducted back in March 2020 (when the first national lockdown began) revealed 31% were planning to kick off a home improvement project in the next few weeks.

The relentless demand for DIY products since then has led to shortages, though, and price increases to boot. So Which? has surveyed thousands of shoppers and conducted in-depth pricing research to reveal the retailers you can rely on for stock availability and top-notch customer service as well as low prices.

Which are the best DIY stores?

We surveyed 6,212 people (1,610 Which? members and 4,602 members of the UK public) in May about their in-store and online DIY shopping experiences.

If you want to see the full results of our survey, including retailer star ratings for product range and quality, customer service, value for money, after sales service and more, visit our guide to the best and worst DIY shops.

Product range and availability varied widely, with the best retailers scoring five stars for this measure and the worst managing just two. And while 82% of people overall rated employees’ helpfulness and knowledge as good, there were startling differences between the best and worst performers.

The stores’ customer scores – which combine shoppers’ satisfaction with how likely they’d be to recommend the store – are in the table below.

Where can you buy the cheapest tools and equipment?

While customer service is undeniably important, particularly if you need advice on which product to choose or how to use it, no one wants to pay over the odds.

To find out which DIY store offers the most competitive prices, we compiled a basket of 18 popular DIY items including a handsaw, toolbox and masking tape and compared costs at Amazon, B&Q, Homebase, Screwfix, Toolstation and Wickes. We used an independent price-tracking website to calculate the average basket cost (including special offers but not multibuys) from 31 May 2020 to 1 June 2021 at all six stores.

We found some hefty price differences on individual items, too. The DeWalt PZ screwdriver bit box (25 pack), for instance, cost an average of £4.96 on Amazon and £8.75 (76% more) at Homebase.

Screwfix and Toolstation lead when it comes to customer service

Based on shopper feedback, Screwfix and Toolstation are the clear winners of the DIY world. They both earned impressive customer scores of 82% and clean sweeps of five-star ratings, which led us to make them both Which? Recommended Providers.

While the majority of our survey respondents (55%) chose to purchase their items in store, click-and-collect was the most common shopping method for Screwfix and Toolstation shoppers.

Screwfix displays smaller items on its shopfloors and offers a catalogue for customers to browse larger items – it’s a bit like an Argos for DIY. It offers click-and-collect ‘in as little as one minute’ on over 10,000 products and has even started rolling out a 60-minute home delivery service called ‘Screwfix Swift’, which will be available in 30 cities by November 2021.

Toolstation, meanwhile, is one of the UK’s fastest-growing tools and building supplies retailers. It offers rapid click and collect, with most of its range available to pick up within five minutes of ordering. In August, the retailer launched an app for shoppers that shows real-time stock availability at their nearest store.

Third-placed Amazon scored well across the board: 85% were pleased with its product selection, and almost everyone (95%) was satisfied with the delivery service they received.

Which are the worst DIY shops?

French online DIY specialist ManoMano languished at the bottom of our table, with an unimpressive customer score of 57%.

Despite being cheap compared with many DIY competitors and the UK being its fastest growing market, it only scored two stars for value for money.

According to our survey respondents, ManoMano’s low prices were matched by equally low product quality, availability and after sales service. In fact, 5% of those who’d bought from ManoMano felt they’d received ‘very poor’ value for money from the retailer.

Poundland got a lacklustre customer score of 67%, and Argos and Robert Dyas didn’t fare much better, both scoring 69%.

One Argos shopper told us they found its product availability ‘very poor’ and another emphasised its customer service ‘did not stand out in any way.’

Which DIY retailers have coped best with the pandemic? 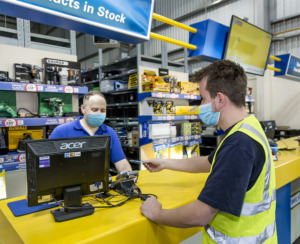 This year we added a new star rating to our survey, enabling shoppers to rate stores’ Covid-19 response. We asked respondents to think about the ways stores and websites communicated pandemic-related changes to the shopping experience, from queues and social distancing to delivery delays.

Table-topping Toolstation and Screwfix both scooped five stars for this measure, alongside Amazon. ManoMano was among a handful of retailers that got two stars for their Covid-19 response.

(This story was updated on 25 August to add information about Toolstation’s new app for customers.)