Isofix connectors are designed to make installing a car seat quick and easy. Find out how the best and worst Isofix car seats get on in our crash tests.
AP
Alison Potter
In this article


Isofix is an attachment system for child car seats.

Isofix anchor points in the rear seats come as standard in most cars. They’re typically hidden where the back of the vehicle seat and seat cushion intersect.

They’re designed to make installing a car seat much easier, which lowers the risk of getting it wrong.

If a seat is installed incorrectly, it won’t give as much protection as it’s designed to, which could lead to a higher risk of serious injury.

To find out which seats we recommend, see our car seat reviews.

Below, we've picked out the best and the worst Isofix car seats from our recent tests.

Click through to read the full reviews and to find out how each fared in terms of crash protection, ease of fitting in a car and comfort for your little one.

According to the manufacturer, this i-Size infant carrier promises ‘the best in safety, comfort and ease of use’. It’s suitable for babies measuring 40-85cm, which is birth to around 15 months. Read the full review to find out how it scored in our tough crash tests.

This Best Buy car seat enables your baby to lie flat, which is the safest position and best position for them to travel in. Its i-Size approved and installed using the Isofix base, which can be used with the next seat up, once your baby outgrows this seat. It gets an excellent five stars for safety in our crash tests.

This car seat and base is approved to the latest i-Size R129 regulations, and has built-in side-impact protection. Read the full review to find out if that means it’s got five stars in our crash tests.

As with its predecessor, this i-Size car seat is a Best Buy. It’s extended rear-facing and gets five stars for overall safety, indicating a very low injury risk in a front or side collision. The seat is spacious and well-padded, and the adjustable Isofix connectors give your child more legroom and they enable the seat to have a secure and stable fit in the car.

These Isofix child car seats have scored poorly in our tests.

We crash test every car seat we review in a front-impact and side-impact crash, and our experts also do around 500 fitting checks each year to see how easy each child car seat is to fit. 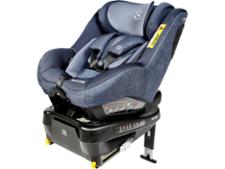 This child car seat has passed the regulatory tests required by ECE R44/04 to be sold as suitable for children from birth to 25kg. But in our own tests, which are conducted at higher speeds and using stronger forces than the standard requires, this seat gets an average safety rating. Our lab experts spotted issues when testing it in group 2 mode (from 15 to 25kg). It’s also scored poorly for ease of use, and the risk of incorrect installation. 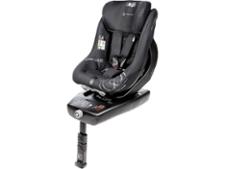 This child car seat and Isofix base has passed the regulatory tests required by ECE R129 to be sold as suitable for children from 40cm to 105cm. However, in our tests, which are conducted at higher speeds and forces than the standard requires, we found weaknesses in frontal-impact safety. The car seat shell broke during frontal-impact crash tests when used forward-facing. Due to this, it’s a Don’t Buy and the overall score is automatically downgraded to 20%. 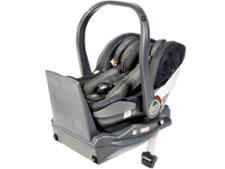 Isofix is a child car seat attachment system that uses metal anchor points built in to the chassis of the car. The Isofix connectors from your baby or child car seat fit on to these.

The anchor points are often hidden within the car's seat padding. On some car seats, the Isofix connectors are part of the seat itself. With others, you have to buy a separate Isofix base to install into your car, and your seat will click on to this.

Once the connectors are clicked together with these anchorage points, a baby car seat has to be secured by a third point.

This can either be a support leg, which comes built into the seat or seat base, or a top tether (a strap that attaches to a mount somewhere behind the rear seat).

Both of these work to prevent the car seat tipping forward in an accident and you can find out more about them below.

Do all cars have Isofix?

The first car to have Isofix was the Volkswagen Golf IV in 1997.

Since 2004 Isofix has become standard and now all new cars have Isofix on at least some of the back seats.

Top-tether anchor points for baby car seats have been common in cars since the end of 2012.

Do all Isofix seats fit in Isofix cars?

No, not unless you have an i-Size seat and i-Size car. For more information, read our i-Size child car seat advice guide.

You need to check whether the car seat fits your car and any other cars it might be used in.

Most of the main manufacturers have a fit finder, which is a good starting point, but it's still important to try out the car seat in your car before you buy.

Visit our guide on how to fit a child car seat for tips and checklists.

Research into child car-seat fitting, including our own, shows that car seats are routinely fitted incorrectly.

It's still possible to make mistakes with Isofix seats but they are, in general, easier to install than belted seats. This is because you simply plug the Isofix connectors into the anchor points found on the back seats of your car.

On some seats there’s a third anchor point needed. For example, some baby car seats come with a support leg (a prop leg that extends from the seat down to the car’s floor) or a top tether.

If you have Isofix anchor points in your car, we'd recommend using an Isofix child car seat.

Our car seat reviews explain which installation methods you can use with each child car seat we test.

What is an Isofix support leg?

Many baby car seats are used with an Isofix base (either included with the car seat or bought separately), which is permanently installed into your car. You just click the baby car seat on and off.

The base will use a support leg that extends from the seat’s base to the car’s floor and locks into position.  It’s designed to prevent your baby car seat from tipping forward in a crash.

Most car seats or seat bases with a support leg have something visual, such as a green or red indicator or an audible guide that will bleep at you if the leg is set to the wrong length or installed correctly.

Some cars may allow the use of a support leg resting on an underfloor compartment. It is vital you ask your car manufacturer what it recommends and check each car seat on a fit finder to check for your make and model of car.

What is top tether?

A top tether is a fabric strap that’s used to help secure a baby car seat (or extended rear-facing car seat) to a tether anchor point in the car.

The tether point is usually found in the boot somewhere, but not always, so refer to your car’s manual to find out where it is in your car.

If the design of your car prevents you using a car seat with a support leg (if there are underfloor compartments in the back, for example) you can use a top tether strap instead.

The tether stops the car seat pivoting forwards in a crash and helps absorb some of the crash forces.

When securing the top tether, it’s vital to make sure you’re attaching the strap to the correct anchor point in your car, as sometimes a tether point can be mistaken for a headrest stem or luggage tether fixing (neither of these are meant for use with a child car seat and aren't designed to withstand the forces of a crash).

All cars manufactured since November 2012 have to have top tether anchor points, but some much older cars will have them, too.

They do a similar job to the Isofix connectors you may be more used to on baby and toddler car seats, in that they connect to the Isofix anchor points on the back seat of your car, but they look a bit different.

Isofit connectors are more like large hooks on the end of flexible arms or sometimes straps (rather than the rigid arms of Isofix connectors).

The Isofit connectors hold the seat in place, while the car’s adult seat belt secures your passenger into the child car seat.

Isofix or Isofit connectors on a Group 2/3 or i-Size high-backed booster seats don’t work in the same way as they do for baby or toddler car seats.

They’re not designed to absorb the forces of a car crash, but are used to keep the seat in place when it’s not in use, as an unsecured child car seat becomes a very heavy projectile in an accident.

It’s the adult seat belt in a high-backed booster seat that helps distribute the force of a crash away from a child’s body.

Go to our best child car seats for older children guide to see the high-backed booster seats we rate and which ones didn’t impress in our tests. 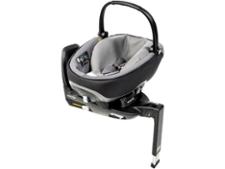 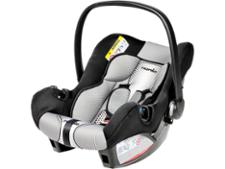 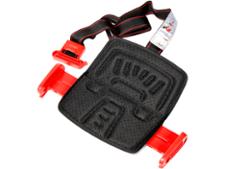 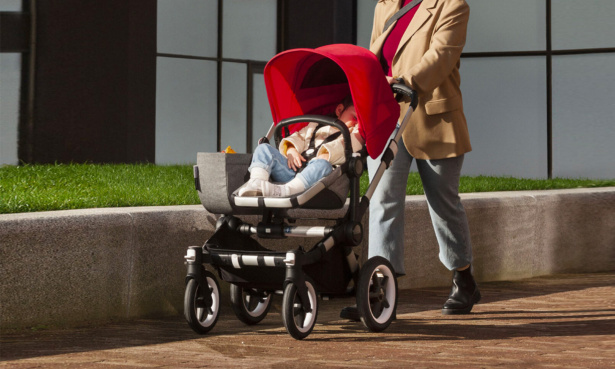 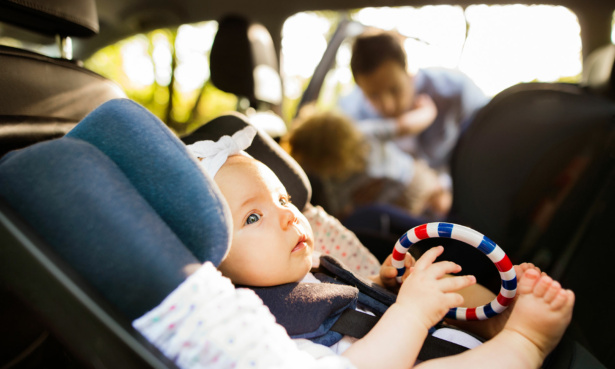 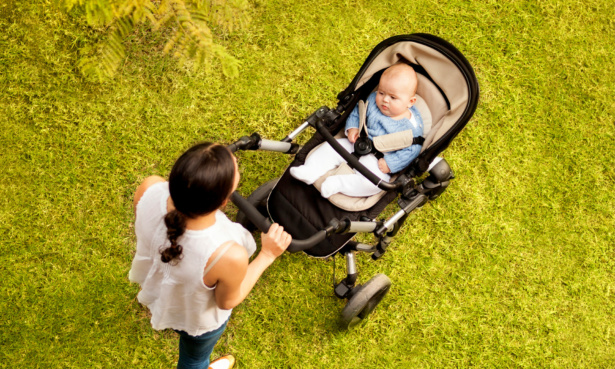 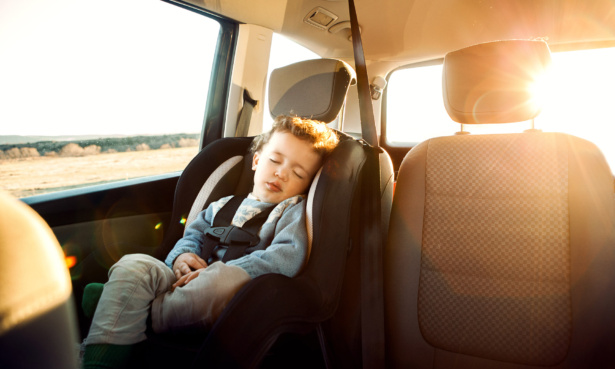