About Which?
►
How we are run

The Council of the Consumers' Association is the ultimate governing body of our charity and the Which? Group as a whole.

Council trustees take on a really important role at Which?, being both charity trustees and company directors. Trustees are responsible for setting the strategy of the Group to enable the charity to deliver its charitable purpose; providing scrutiny, support and stretch to the Which? Limited Board and the Leadership Team to drive progress and deliver impact. They also steward the charity to make best use of its resources, thereby also protecting and conserving its assets for tomorrow's consumers as well as those of today.

For further information about our governance structure and the role of Council and its trustees click on the below icons. 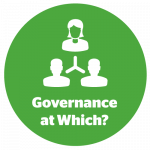 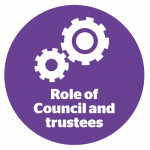 You can also meet our Council of Trustees here.

Who can apply to become a trustee?

How long can a trustee serve?

A trustee can serve up to three terms of three years, so a total of nine years. Only in exceptional circumstances can a trustee be reappointed after nine years.

How will we seek applications for vacant trustee positions?

Vacancies are widely advertised, so keep a lookout.

All trustees are appointed by Council following a search-and-selection process led by the Nominations Committee, with two independent members who ensure transparency and fairness of the processes used to find and appoint new trustees.

How and when are members invited to vote on trustee appointments?

Members vote for trustees over a three-year cycle. Trustees are recommended by the Council of Trustees and new trustees appointed by the Council need to be approved by members within a year of their appointment. Our members also need to approve the reappointment of each trustee after three years of service. If the majority of member votes cast at the AGM do not support a trustee’s appointment then that individual will cease to be a trustee.

See below for a copy of the voting booklet for the 2021. This explains the voting process in more detail and summarises the skills and experience that those recommended for reappointment to the Council of Trustees will bring. All members who are eligible to vote* should expect to receive their personal copy of a voting booklet and voting paper towards the end of September each year.

*Members who are eligible to vote are ordinary members or subscribers/members who have subscribed to Which? goods or services for more than one year.

The results of the 2020 trustee appointment voting process were announced at our AGM on 5 December. All five trustees who were up for appointment and reappointment received a majority vote from members and are appointed until 2023 AGM. The voting results can be viewed below.

If you have any questions, please get in touch by emailing council.appointments@which.co.uk