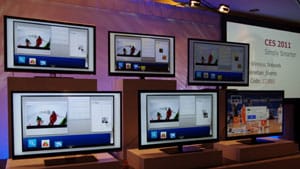 Last year was the year of 3D TV and internet TV. If LG’s CES 2011 press conference is anything to go by, 2011 will be the year of slightly better 3D and internet TV as it announced a new range of LED backlit 3D TV sets with a newly updated internet service dubbed ‘Smart TV’.

In total LG announced a staggering 31 LCD-based TVs and 12 more Plasma-based TVs, of which over half will feature LG’s new internet TV platform: Smart TV.

It also announced an extensive range of ‘Full LED’ 3D TVs, which continue LG’s preference for so-called ‘passive’ 3D (aka Cinema 3D) due to the greater comfort it offers.

A key feature of LG’s new TVs is the newly updated Smart TV internet platform, which boasts a new interface and far more applications than the minor collection we found when we tested internet TVs recently.

See the LG Smart TV in action at CES 2011 in the first look video review below:

UK users of Smart TV will benefit from BBC iPlayer, Facebook, Twitter and Google Maps applications, and film on-demand from both Acetrax and Viewster. A large collection of games and access to internet radio stations will also be included, as will LG’s innovative Magic Motion Remote on selected models.

Those without an LG Smart TV have the option of purchasing the Smart TV Upgrader box, which adds the functionality to any TV. LG was bullish about the prospects of the new service, claiming focus groups ranked it more highly than Apple TV or Google TV services.

If 3D is more your thing then LG’s LED Cinema 3D TV range may loosen your purse strings. The new range comprises three models (LW450U, LW550T and LW650T) with sizes ranging from 32 to 55-inches.

Each 3D TV will come with four 3D glasses, which are of the passive type. This means they’re lighter and more comfortable than ‘active shutter’ systems of rivals Samsung, Panasonic and Sony, and much cheaper, too.

In the past our tests have revealed LG’s system to be more comfortable, but lacking in 3D depth. We’ll be taking a look at the updated models on the show floor to see if things have changed.

Read our CES 2011 report for all the details from the world’s largest technology show, including first look videos and photo galleries.