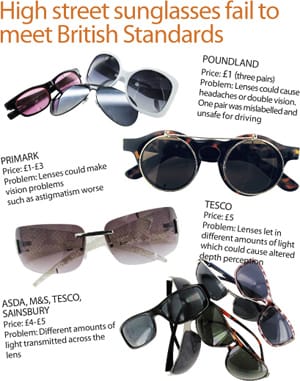 You might not expect a pair of £5 sunglasses to last forever, but you wouldn’t expect a supposed bargain to potentially worsen your eyesight, cause double vision or headaches.

Too dark for driving

The sunglasses on test were bought from George at Asda, Marks & Spencer, New Look, Poundland, Primark, Sainsbury’s and Tesco.

All the sunglasses blocked UV rays, but a Poundland pair was mislabelled, leaving a wearer unaware that the lenses were too dark for safe driving.

Although two out of three Primark pairs passed our tests, the one that failed had the wrong prescription level which could make vision problems, such as astigmatism, worse.

New Look was the only store where all three pairs passed the Which? tests with flying colours.

Which? health expert Joanna Pearl said: ‘While these problems would not cause long-term vision damage, some of them would be unpleasant for the wearer and could even compromise their safety. Glasses must comply with the British Standard they clearly claim to meet on the label.’

Stores to investigate Which? findings

We will be sending the worst results to Trading Standards. Asda, M&S, Primark, Sainsbury’s and Tesco all confirmed that their sunglasses are tested to British Standards.

Asda, Poundland and Primark will be investigating immediately.

If you’re buying sunglasses make sure you do the following checks:

Here are our results for each pair we tested and the standards they failed on: