The raspberry season isn’t over yet – grow autumn-fruiting varieties and you can enjoy them well into the cooler months. Which? reveals the best varieties and a new way to grow them.

We tested 11 varieties of autumn-fruiting raspberries, which traditionally fruit between August and October, to find the best-tasting and best-cropping varieties. We also tested a revolutionary technique that means you can harvest them in high summer, too, between July and October, without affecting yield.

Back in 2008, we planted 10 canes of 11 varieties of autumn-fruiting raspberry, including some that were not yet launched onto the market to ensure our test would be up-to-date. We monitored their progress and, each year, picked every last berry from every cane – amounting to well over 70kg a year!

In September 2010, we took some of our raspberries to the Frampton Country Show, where hundreds of visitors took part in our taste test. This enabled us to identify exactly which were the best-tasting varieties.

If you want to pick raspberries in the autumn – generally between August and October –  then opt for ‘Joan J’ or ‘Polka’ to give you the biggest yields.

Our top raspberries for taste

‘Joan J’, one of our biggest croppers, also came out as top-tasting raspberry: 74% of people who tried this variety at the Frampton taste test preferred it to any other variety they tasted. Other popular varieties for taste included ‘Polka’, which also cropped well, and ‘Brice’.

We also tried a novel technique known as ‘double cropping’ on our raspberries. This allows you to harvest raspberries from the same plants from July to October. We were impressed with this new technique and think it’s a great way to get more fruit from the same space and plants. Not all varieties performed as well with double cropping, though. The best in our test were ‘Joan J’ and ‘Autumn Treasure’. Find out more about double cropping in the September issue of Which? Gardening magazine.

Generally, autumn-fruiting raspberries are much easier to care for than summer-fruiting raspberries. They are self-supporting, so don’t need a frame to stand upright. Just an annual trim and feed will ensure your canes keep producing fruit year after year. We were impressed with the double-cropping technique, too.

The best of the best

If there was just one variety to go for, we’d pick ‘Joan J’ every time. 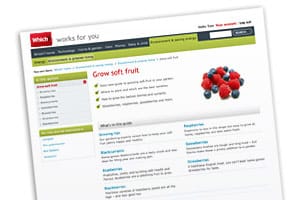 If you haven’t grown your own raspberries before, you may be surprised at how easy it is to get a good crop. For more information about growing raspberries and other soft fruit, have a look at our free guide, how to grow soft fruit.

Pruning raspberries and other fruit is made easier with one of our Best Buy secateurs. We’ve tested over 30 pairs of secateurs to find the best ones, as well as those we wouldn’t recommend. Read our review of secteurs to find out more.