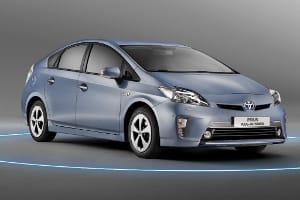 Up to 235.4mpg from Prius Plug-In Hybrid

Toyota’s new Prius Plug-In Hybrid has smashed the all-time fuel consumption record for Which? tests. Our team averaged 83.1mpg, making it easily the most fuel-efficient car we’ve ever measured.

Prius most efficient in town

The new Prius, which has a petrol engine and an electric motor, was even more impressive in our urban cycle test. It returned a remarkable 235.4mpg in our rolling-road simulation of stop-start city driving.

Even in our test that simulates extra-urban (out-of-town) driving, Toyota’s latest hybrid averaged an impressive, record-breaking 100.9mpg, confirming that it should be exceptionally frugal in real-world driving scenarios.

However, the Toyota isn’t so impressive on the motorway. In our simulated test of motorway driving we averaged only 46.3mpg. This makes the Prius hardly any more frugal than a conventional petrol-engined rival. For example, a Mazda6 1.8 petrol would use £15.12 of fuel per 100 motorway miles travelled, compared to the Toyota’s £13.20 of fuel.

Plug in your Prius at home

The secret to the new car’s exceptional low-speed fuel figures is its battery pack. Unlike the existing Prius Hybrid, whose electric motor is recharged by the on-board petrol engine alone, the Plug-In Hybrid’s battery can be recharged from a domestic plug socket in 90 minutes. This gives it a much longer range using electric power only – up to around 14 miles – so the petrol engine is used less.

The cost of recharging the battery from empty at current rates is 64p, which could provide up to 14 miles of petrol-free travel.This makes the Prius a cheap car to run in town: the cost for travelling the same 14 urban miles in a 1.8-litre petrol Mazda6 would be £2.91.

Only the ‘lease’ version of the Prius Plug-In Hybrid has so far been available – this is the version we tested. The ‘retail’ production version that arrives next year will have a lighter and more compact battery pack, raising the prospect of even better fuel economy.

We test fuel economy under strict laboratory conditions, using realistic test cycles to reveal the facts behind the figures.

Unlike the official EU mpg test, we measure economy with both a hot and a cold engine – and include a motorway test cycle. That’s why our results often differ from the figures you see in glossy car ads.