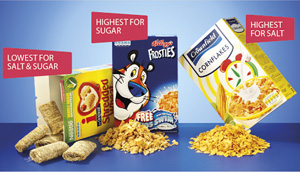 Many popular breakfast cereals, especially those aimed at children, are high in sugar, Which? has found.

When Which? analysed the nutritional content of 50 breakfast cereals, 32 were high in sugar.

All of the cereals aimed at children  – except Rice Krispies – were high in sugar.

Which? deputy editor Amanda Diamond said: ‘Kellogg’s Frosties were the worst for sugar, but perhaps more surprisingly, our analysis revealed that other cereals which may be thought of as ‘healthy’ were also high in sugar.

‘We found that Kellogg’s Special K and supermarket own-brand rice and wheat flakes – often marketed as low-fat – are high in sugar.

‘And Kellogg’s All-Bran Bran Flakes contain 22g of sugar per 100g – almost as much as Weetabix Chocolatey Weetos.’

Previous Which? research in 2006 and 2009 found cereals contained alarming levels of salt – so Which? is pleased that action has been taken to reduce salt levels.

Just eight of the cereals analysed failed to meet 2012 salt targets, although a 30g serving of the saltiest cereal – Lidl Crownfield Cornflakes – contains almost as much salt as a pack of Walkers Ready Salted crisps.

Breakfast cereals are eaten by half of UK adults and children – so it’s important that healthy choices can be made.

Which? found that there are healthy options available, but the inconsistent way that cereals are labelled makes it difficult to work out which these are.

Only 14 of the 50 cereals had traffic light labelling, serving sizes differed between brands and some manufacturers included milk in the ‘per serving’ nutritional information while others didn’t – which make products difficult to compare.

Which? is campaigning for consistent traffic light labelling on all cereals, further reductions in sugar and salt levels and the development and marketing of healthy cereals for children.