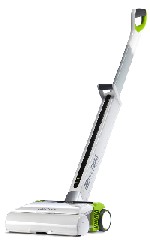 Update for February 2018: We’ve just reviewed Gtech’s newest model – the Gtech Pro. See reviews of all Gtech vacuums, including the AirRam and K9 models, by heading to our indepedent Gtech vacuum cleaner reviews. Below is our original story about the launch of the original Gtech AirRam.

Mains-powered vacuum cleaners typically contain electric motors ranging from 1400W to 2400W – but our tests show that a bigger motor does not necessarily equal better cleaning.

The AirRam from Gtech, which is available exclusively in John Lewis, is at the opposite end of the scale – boasting a low-power 100W electric motor – yet it claims to rival the cleaning power of the most popular vacuum manufacturers such as Dyson.

So can it possibly live up to its ambitious claims? Discover our test lab verdict in our full Gtech AirRam review, based on the results of our in-depth cleaning tests.

In the 1980s, James Dyson revolutionised the world of vacuums and vacuum cleaning by introducing cyclone technology. Since then, while this patented technology has evolved, and other manufacturers have developed competing bagless vacuums, there has not been a breakthrough of similar groundbreaking proportions.

Gtech says that after nearly three decades, that moment has come. The Worcester-based company claims its AirRam is unique as it uses a tiny amount of electricity compared to other leading machines, compresses dirt into dust free bales for easy emptying and delivers unrivalled cleaning performance.

How the Gtech AirRAM works 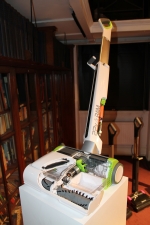 An inside view of the new AirRAM at the press launch

The AirRam has two small compartments located within the vacuum head. Because the vac only has to suck the dirt 5cm from where it is collected into the compartment, it doesn’t need much power. To help remove the dirt from the floor, the AirRam’s brush bars ‘agitate and loosen’ the dirt.

The fluff and grime vacuumed is not just deposited into these compartments, but compressed into bales. These little parcels of dirt, which Gtech say will be dust free, can then be simply tipped out into the bin.

The bales look very small but thanks to the compression technology, Gtech claims the AirRam has ‘the same dirt capacity as a Dyson DC24’ – which we’ve measured as 1.1 litres.

As the AirRam is a cordless vacuum cleaner, it will need to be charged before use. Gtech says the vac will work for 40 minutes without losing suction, and there is a clear ‘battery remaining’ indicator to show how much charge is left.

Gtech says the AirRam is takes just four hours to charge, which is very impressive compared to other cordless vacuum cleaners we’ve tried out. These typically took between 16 and 24 hours, and lasted about half as long.

The AirRam makes some impressive promises, but some need to be taken with a pinch of salt.

Which? vacuum expert Matt Knight said: ‘Gtech’s claim that the AirRam will save you £252 over five years is based on the assumption that you vacuum for three hours a week, every week. This seems to be towards the high-end of the scale, as a survey of Which? members shows that on average people take 37 minutes to vacuum their entire home’.