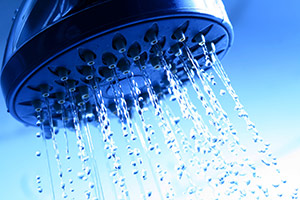 A quick shower is usually more water efficient than a bath

Britons shower, on average, five times per week, taking an average of nine minutes each time, according to new research commissioned by energy company Eon.

The research suggests that if people can reduce their shower time by two minutes on each occasion, individuals could save around £8 per year in energy bills – amounting to around £20 per year for an average-sized household.

Looked at in the context of the nation as a whole, it’s a potential saving of 300m worth of energy a year. It’s a simple illustration of how cutting down on shower time can help both household finances and the environment – something we cover in our guide to using less water and on cutting energy costs.

It won’t come as especially groundbreaking news for many, but the research also adds weight to the oft-repeated assertion that women take longer than men when it comes to lathering up. The study found that over a quarter of men spend less than five minutes in the shower, compared to a fifth of women.

It also revealed that, while the average person takes 1.7 baths per week, spending around 15 minutes in the tub each time, it’s the ladies who like to have a nice long soak. One in ten of the female respondents enjoys lounging in the bath for over half an hour, the report states. However, while women spend longer in the bath and shower, men are almost twice as likely as women to have more than eight showers a week.

Young adults are the biggest water wasters, though, with 18-24 year olds apparently spending almost twice as long in the shower as those over the age of 55.

Some people might decide it’s worth paying the extra money for the enjoyment of a long, hot shower, but for those who are concerned about spiralling energy bills, cutting down on hot water use is a simple way to save money.

Small everyday changes, such as taking slightly shorter showers, can add up, helping you to save on your heating and water bills. Some energy suppliers and water companies offer free gadgets, such as shower timers, to help you cut back. Check with your suppliers to see what is on offer.

As well as free gadgets, other things you can do to cut energy and water bills include: