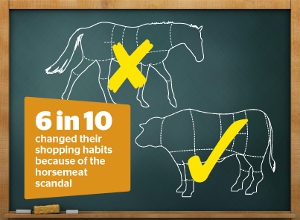 Which? wants government action to address a decline of consumer trust in the food industry.

Consumer trust in the food industry has dropped by a quarter (24%) since the horsemeat scandal broke, a Which? survey has revealed. 30% of shoppers are now buying less processed meat and a quarter (24%) are buying fewer ready meals with meat in, or choosing vegetarian options.

Two thirds of people (68%) don’t think the government has been giving enough attention to enforcing labelling laws, with half of consumers (47%) not confident that ingredient information is accurate.

Confidence in food safety has also taken a hit. Before the scandal broke, nine in 10 felt confident when buying products in the supermarket. This has dropped to seven in 10.

Share your view: How has the horsemeat scandal changed your shopping habits? Join the debate on Which? Conversation.

Action needed from the government

Which? wants the government to take five urgent steps:

Horsemeat: lessons to be learned

‘The horsemeat scandal exposed the need for urgent changes to the way food fraud is detected and standards are enforced. These serious failings must be put right if consumers are to feel fully confident in the food they are buying.

‘Ministers must ensure that everyone involved, including their own departments, the FSA, the food industry and local authorities, are crystal clear about their responsibility to protect consumers and are properly equipped to do so.’