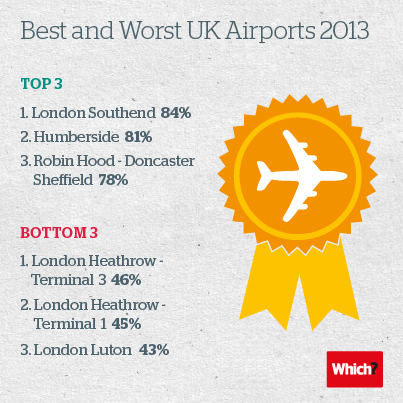 London Southend has topped a Which? survey to find the UK’s best and worst airports, heading a list of 35 airport terminals.

In a poll of more than 11,500 passenger experiences, London Southend fared best, achieving an impressive customer score of 84%. In contrast, travellers flying from London Luton airport typically faced a less than positive experience, with its terminal receiving a poor customer score of just 43%.

You can see how each of the 15 small airports and 20 large airports, including Heathrow, Gatwick, Manchester and Stansted, compare in our full survey results. These include ratings for speed of check-in, queues at passport control, and information and navigation at airports.

Travellers wanting to fly from a London airport should consider London Southend, Which? members’ top-rated UK airport. Southend has London’s newest airport terminal. It opened in March 2012 and is fast earning a reputation as an airport with a difference, especially when it comes to speedy check-in and arrivals.

Located 40 miles from the capital, and a 53-minute train journey from London Liverpool Street, it scored highly in our survey with top marks for speed of check-in, airport security, passport control queues, information and navigation and airport design.

Which? members who passed through Luton airport on their travels were typically not so impressed with their experience. The UK’s fifth busiest airport achieved a customer score of just 43% for the overall airport experience, scoring two out of a possible five stars almost across the board, including its speed of check-in, passport control queues, airport design and its toilets.

Which? members described Luton airport as ‘dark and gloomy’ and ‘poorly designed and poorly signed inside and out’.

Which? executive director, Richard Lloyd, said: “Our research shows a jumbo jet-sized gap in the performance of UK airports with smaller terminals generally performing better.  It is clear some of our major airports have some work to do if they are to keep more of their passengers satisfied.”

In a separate report into airport check-in times, we also found that online check-in is failing to put an end to lengthy queues at our airports with very little difference in the time people waited at check-in desks compared to bag drop desks after checking in online.

Our member survey revealed Stansted airport consistently had the longest waits for check-in and bag drop, and Southend airport again scored highly, with the average waiting time for bag-drop eight minutes, half the 16 minutes that you’d wait, on average, to drop off a bag at Stansted.

In June 2013, we asked 11,537 Which? members to complete an online survey about their experiences of flying from a UK airport in the past year.

Our Customer scores are based on a combination of overall satisfaction and how likely people are to recommend the airport to a friend.