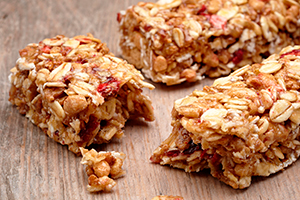 We found one cereal bar from Kellogg’s that’s made up of 42% sugar.

Cereal bars should have clearer traffic light nutrition labelling after our research revealed that some of the so-called healthy snacks contain over 40% sugar.

A snapshot survey of 15 popular cereal bars and breakfast biscuits analysed the amount of sugar in each bar. We found that some are more suited to the confectionery aisle, including those marketed directly at children.

We believe that manufacturers of these granola and breakfast bars, including brands such as Kellogg’s and Quaker, need to do more to help shoppers know the true content of their products.

If you’re interested in looking after your health but don’t want to waste money, read our article on the food supplements you don’t need.

Of the cereal bars we looked at, we found that a Kellogg’s Coco Pops Snack Bar aimed at children was the worst offender, consisting of a staggering 42% sugar. Others marketed at children, such as Kellogg’s Rice Krispie Bar, Frosties Bar and Harvest Chewee (milk choc chip) were also high in sugar and saturated fat.

Some cereal bars make claims about the health benefits, such as the vitamin and mineral content. But we found that while Kellogg’s Nutri-Grain Fruit Breakfast Bar (strawberry) contains 31% wholegrain cereal and 33% sugar. Quaker Oat So Simple Golden Syrup Morning Bars, which are just over 15% sugar, were the lowest for sugar overall.

Only one of the leading products we looked at had clear traffic light nutrition labelling on the front of the pack. Mars’s Tracker Bar displays the scheme, making it clear that it is high in sugar, fat and saturated fat.

It may be healthier to make your own cereal bars – that way you’ll know exactly what goes in to them. Find out the best equipment to use with our full range of food processor reviews.

What next for cereal bars?

Our survey found that just a quarter of people are satisfied with the action government is taking to help people to eat healthily. The most common actions respondents say they want from government include encouraging the industry to lower the fat, sugar and salt content in foods and ensuring that food companies don’t use tactics that appeal to children to promote less healthy food.

Which? wants the next government to lead initiatives to make it easier to eat healthily and ultimately tackle rates of obesity and diet-related disease.

Which? executive director Richard Lloyd, said: ‘It’s worrying that cereal bars, especially those aimed at children or claiming to be healthy, contain so much sugar but most don’t make this clear on the front of the pack.

‘We now want the Government to tackle this issue head on by making sure all manufacturers use traffic light nutrition labelling, encouraging reductions in sugar, fat and salt and ensuring manufacturers promote their products responsibly.’