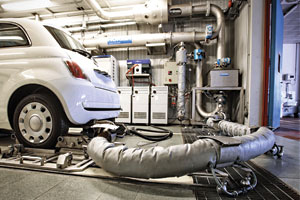 In our tests, 95% of diesel cars, and 10% of petrol cars, pump out more NOx than limits allow. The majority of petrol cars we’ve tested also exceed EU carbon monoxide (CO) limits, and some hybrid cars are not as innocent as claimed.

It’s not just Volkswagen. In fact, it’s not just diesel engines, either. It’s almost everyone. Whether diesel, petrol or hybrid, the majority of cars exceed EU emission limits when faced with our more realistic tests.

Some modern cars are so excessive in their production of NOx and CO that, in our tests, they would fail to meet any EU emission limits from this century.

Sick of yet another emissions story? The tests are the culprit. Help us end the emissions debacle and bring about more realistic official testing by signing our Come Clean on Fuel Claims campaign.

Which? findings – the truth behind emissions

In light of the recent emissions scandal, we extracted and analysed detailed emissions data for over 300 cars that we’ve tested since 2012, in order to find out what cars are really emitting into our atmosphere.

Despite all of the vehicles officially complying with recent EU emission regulations (either Euro 5 or the tougher Euro 6 depending on the age of car) our realistic testing found there is a chasm like gap between what is claimed and what is pumped into our air:

• Staggeringly, nearly all (95%) the diesel cars emitted more oxides of nitrogen (NOx) during our tests than official limits allow.  One car, the Jeep Grand Cherokee, emitted 15 times as much NOx as the Euro 5 limit;
• One in 10 (10%) petrol cars also emitted more NOx than limits allow;
• Two-thirds (65%) of petrol cars emit more Carbon Monoxide than the 2006 limit (Euro 4), with one model, the Hyundai Veloster, producing five times the legal limit in our tests;
• Despite being a hybrid, the Peugeot 508 RXH also creates more NOx than EU limits. Several petrol hybrids (the worst being the Lexus LS) also create more CO than limits would allow;
• 38 of the cars we tested were even unable to meet the ‘Euro 1’ emissions standards from 1993.

We’ve found that of the cars we’ve tested, all of which are officially compliant with either Euro 5 or Euro 6, 85 exceed Euro 3 limits in our tests. This means these 85 cars do not pass the earliest emission regulations from this century. Five of which had previously performed well in enough in areas like performance and ride comfort to be named as Best Buys – but in light of our findings, we have now removed Best Buy awards from these cars.

Find out more about which cars are the biggest producers of CO and NOx by heading to our guide on car emissions.

At the same time, we have also removed Best Buy awards from 23 Volkswagen Group cars following the dieselgate scandal. These 23 cars are all Euro 5 models that have been implied in the current scandal.

Once again, it’s the tests that are to blame.  The reason the figures don’t match up with the legal limits is the outdated New European Driving Cycle (NEDC) test. This is the same official test used to measure official fuel economy (mpg), which we’ve repeatedly criticised for being lenient and exploitable.

Our assessments also take place in a lab but, in contrast, we use more challenging and realistic driving cycles than the NEDC, based on the new test we are pushing for the industry to adopt. We will also be adding on-the-road emissions tests in the future.

We need your help – Which? car survey

We don’t just rely on lab data when we test cars, we need your input too. If you fill out our survey about the car you own, we can use that information to create reliability ratings for both carmakers and individual models of car.

Not only will your input have an affect on the test score of each car, but by entering the survey, you will also have the chance to win £2,500 – that’s enough to pay your fuel bills for a year (T&Cs apply). To help us out and be in with a chance of winning the prize, take the survey.